Books to Read From Oni Press

Last week we learned about Oni Press and this week we’re going to take a look at some Oni Press books that you should read if you’re looking to check the publisher out. All of these books are relatively easy to find either online or in your local comic shop, so check them out.

Alright let’s get the obvious one out of the way. Yes, you should read Scott Pilgrim regardless of what you thought of the movie or it’s oversaturation in the last two years. If for some reason you’ve been living under a rock the story goes something like this: Scott must fight the seven evil ex’s of his current girlfriend Ramona in order to continue dating her. There are references to video games, comic books, movies and music all within this tale. But what will really get you is the fact that once you start reading this book it is damn near impossible to put down. Scott really is the stupidest protagonist in the world, but you can’t help but root for him as he tries to get the girl.

Prohibition, Gangsters and Demons. If The Damned doesn’t grab you from that alone then how about we add in the main character Eddie; he’s cursed so that he can’t die. If he does die the next person or demon to touch him will trade places with him. Eddie is caught in a gang war between two demon families, when all the while he just wants to save his girl. This book is gritty and full of dark magic and yet captures the era of the story perfectly. I loved the story, but I really loved the art. The all black and white brushes just worked really well with the story and fit the presentation of the book. This same team went on to produce a sequel to this story and from there they moved onto The Sixth Gun.

Imagine if some of the best secret agents of the U.S. were actually famous actors or actresses? That’s the concept for The Leading Man. Nick is the latest “hotness” in Hollywood. His latest movie has taken him to France where he encounters an enemy training faculty. What’s interesting about this story is watching Nick balance between the two roles. The story is very lighthearted and pokes fun at Hollywood, while also telling a very good story full of action and classic spy moments.

Local is an amazing collection of stories about different people in different situations with only one character to connect them all. Sometimes she’s the main character, other times she’s just there as background; but she is the one and only constant. Author Brian Wood not only tells different genres of stories, but he experiments with how he does it throughout the series. One of my personal favorites is the third issue, “Theories and Defenses.” The narration is a rock star conducting a phone interview, while the issue shows us the different members of the band and what they’re all up to now that the band has broken up. The narration is great because the person talking is basically lying or dolling up the truth and the page reveals what’s really happening and I love when narration fights the story.

This book is basically about a high school girl that’s new to town and falls in love with her English teacher. Along the way she makes friends with the only punks / mods in town and together their rag tag group share many memorable adventures. The first thing that drew me into this book was the art. It’s got a Manga-American look to it, but manages to find this mid ground that works with the subject matter. Bleu and her friends are great together and really create memorable dialog, but admits all the jokes is real friendship and teenage angst. The series is full of musical referrances and is one of the few comics that has a recommended reading list drawn into the page.

Scooter Girl is actually about a boy. A boy plagued by one girl in particular that moves to town and ruins his life. Before her arrival he was the coolest guy, with the best scooter that got all the girls. After her arrival he has nothing but bad luck until he can’t take it anymore and decides he’s going to try and kill her. This is the second series written by Chynna Clugston who also wrote Blue Monday and shows the world of Mod scooter enthusiasts. It’s a very unique story that runs the gambit of funny to sad with every surprise in-between. I really enjoyed the main character's journey from the un-likable prick to the likeable hero.

Dex runs a private eye firm in Portland, Oregon. She has a mentally challenge brother that she has to care for and a very large gambling debt to a casino. It’s this debt that lands her, her next gig. The casino owner’s grand-daughter has gone missing and she’ll wipe Dex’s debt clear if she finds her. It seems simple enough until Dex gets shot in the chest and left for dead on the first night of the investigation. From there the simple missing person’s case snowballs out of control until it involves every member of a powerful crime family. This book is some of Greg Rucka’s best work. It’s chilling real and will leave you guessing from beginning to end. Also you’ll never find Portland boring again after reading this book. If you love western’s or private eye books then you should already have bought this book.

I bet someone out there was calling this list pretty close until they got her. Magic Pickle? Really? Yes really! Magic Pickle is written and drawn by Scott Morse. It’s geared towards a younger audience and actually has moved on to be produced by Scholastic, but this first series by Oni is a great read. It’s goofy and full of references that are exceed that of a child’s knowledge. Morse’s art is fun and looks great in black and white as Magic Pickle fights rotten vegtables from the Cold War era.

I’ve actually only recently read this series and that makes it the newest thing on the list. There’s two volumes out with a third on its way for next spring which is a shame because I really want to read more of it! Possessions is about a little girl possessed by Gurgazon the Unclean; a pit demon from the lower rungs of hell. She’s been captured and brought to a house that contains the Spirits and Ghostly Curiosities of Llewellyn-Vane. Once in the house Gurgazon does nothing but try to escape. Unfortunately for her the Butler is always one step ahead of her. The book is funny and simple, but the humor stays with you all day with a smile on your face as well. The art is also simple and yet very complex as author/artist Ray Fawkes is a brilliant storyteller. This is another all ages book, but trust me it's great for everyone. 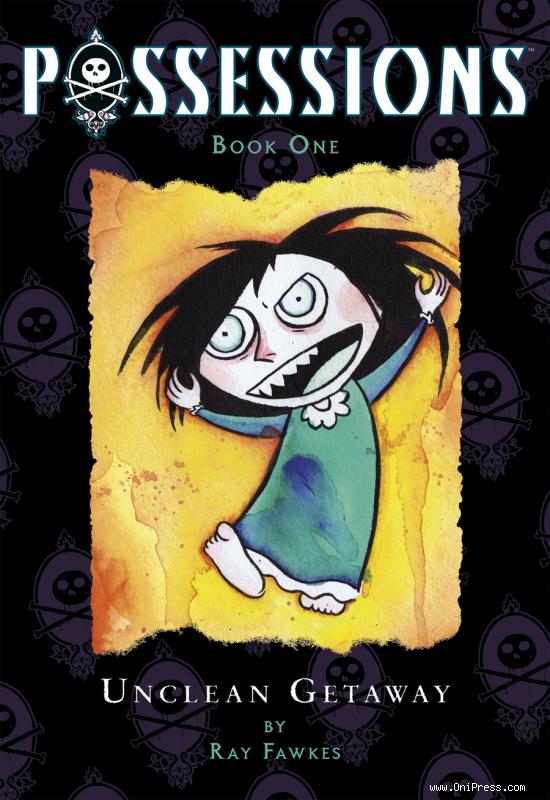 Well there you have it, so books you should read from Oni Press. There a lot more like The Sixth Gun or Kissing Chaos, but then the list could just keep going on and on. If you have some recommendations for Oni books pop them into the comments below.