By: Justin Moody | Comic News | June 29, 2010
June 29th, 2010 - Los Angeles, CA - BOOM! Studios is proud to present the completed rock epic KILL AUDIO, co-written by musical mastermind Claudio Sanchez and Chondra Echert, with brain-melting art by Mr. Sheldon, collected for the first time in a stunning hardcover edition! Take a trip back to Sight & Sound with Kill Audio and his eccentric gang of misfits on their mission to stop the music!

"This is one of the wildest books we've ever published!" says Marketing Director Chip Mosher. "Fan support for this book is just as epic as the words and art within, and we're glad to give the fans an edition of this story they'll be proud to own and display." 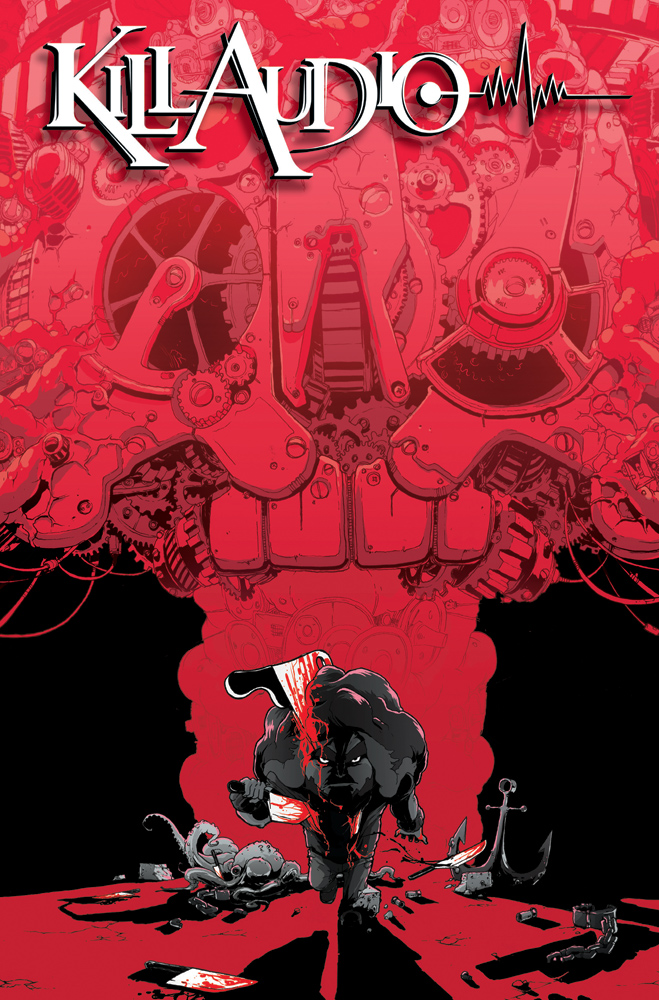 "In addition to all six issues of the critically acclaimed series, this hardcover includes exclusive content sure to please fans of this far out mythos", Says KILL AUDIO Editor Ian Brill. "An introduction by ELEPHANTMEN creator and Comicraft founder Richard Starkings, an original and illustrated prose story shedding light on the KILL AUDIO supporting cast and even an advice column are just some of the extra material readers can expect, to expand on the already rich world of KILL AUDIO. "

Claudio Sanchez is the lead singer/guitarist of COHEED AND CAMBRIA as well as the celebrated creator of the COHEED AND CAMBRIA mythology, of which he birthed the best selling sci-fi mini-series THE AMORY WARS and the 352-page prose novel YEAR OF THE BLACK RAINBOW (Co-written by legendary author Peter David). Sanchez steps out of the Amory Wars mythos with a vengeance with KILL AUDIO, which follows the adventures of an immortal little troll who struggles to find purpose in a land where creativity is a controlled substance. When musical creativity spirals into chaos, Kill Audio discovers his life mission. Supported by a wildly eccentric posse and a nemesis hell-bent on proving the rock troll's mortality, Kill Audio takes on ridiculously mismatched musical sub-genres while traipsing across a vivid landscape; a world that could only come from the intense mind of Claudio Sanchez.

KILL AUDIO comes in a hardbound edition collecting all six epic issues in a stunning foil stamped case wrap. KILL AUDIO Hardcover edition is sold at $24.99 and carries a ISBN code of 9781608860166 and a Diamond Code of FEB100762.