In the zero issue for Brightest Day, Deadman a.k.a. Aliveman, traveled from one resurrected super person to the next. The entire issue was very reminiscent of another DC series… 52. The pacing, the structure and the voice of the series are nearly the same.

This issue continues where Green Lantern #53 left off, with Sinestro bringing Hal to the white lantern. The lantern came falling back to Earth after Blackest Night and now sits in a crater in the middle of a small town. Hal attempts to move the lantern, but is unable to. The white lantern is the now the sword in the stone and the group must find its Arthur. The story then cuts to Deadman, who is still traveling invisibly from one resurrected hero to the next. He was invisible in death and now wonders why he’s invisible in life as well.

Deadman finds himself on a ship overrun by Pirates kidnapping children. He’s forced to watch as the Pirates abduct and attempt to molest the kids. Fortunately, Deadman only travels to other supers; meaning that Aquaman and Mera are on the scene to save the day. Aquaman summons a dead Cracken to destroy the pirate ship along with a dead great white shark to finish off the last pirate. Mera becomes very concerned since Aquaman is still summoning the dead. Reports of Aquaman’s return bring the Black Manta out of retirement as he slaughters a shop full of people before returning to the ocean. Martian Manhunter continues to rebuild Mars by moving the frozen ice cap from the north, closer to his fallen city. As he begins melting the ice cap to re-grow vegetation, he’s struck by a physical vision that forces him to head to Earth. 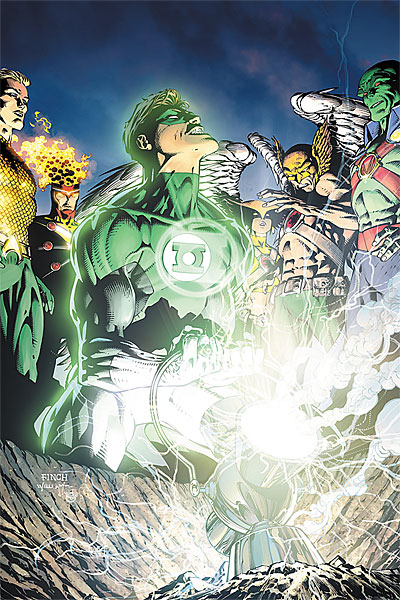 The last chunk of the story follows Hawkman and Hawkgirl being lead by Claw of Horus. What they find are men with guns excavating a dig site. Hawkman, being more of a punch-first-ask questions-later-type, decides to attack the men and take the contents of their large black bag. Hawkgirl and him are shocked to find that the bag contains their original bodies that once housed their souls. Hawkman and Hawkgirl are reincarnated over and over throughout time, so it’s quite the find for them. Just as they start asking questions about their bodies being so far from Egypt, they are blind sighted and lose the bag containing their bodies.

If the issue doesn’t feel like 52 yet, then you clearly did not read that series. Granted, Geoff Johns (Blackest Night, Flash) was a part of the writing team that created the weekly series for DC, but this lacks the direction and originality of that series. The differences between the zero issue and issue one are minimal. In fact, the first issue is still trying to set up the series, which is needless since it was already done in the first issue. With the series already two issues deep, the real question is: What is Johns going to do with the remaining issues? As it stands now, the set up has much broader plans than the issues left to work with. Johns and Peter Tomasi (Green Lantern Corps) do manage to capture the characters different personalities. Aquaman is very bad ass and no longer a C-list character.

Frankly, there are too many artists to list them all and DC didn’t feel the need to breakdown who drew what in the issue. I will say that more than likely Ivan Reis drew the Green Lantern section and was brilliant as always. Aquaman’s section was beautiful and detailed. There scene with the Kracken was amazing to look at and worthy of its splash page. The rest of the art was just so-so and really didn’t stand out. The art and storytelling of the issue could have been a lot stronger if just two artists had tackled the issue rather than four or five.

The issue is full of really cool moments, but that seems to be all that there is… moments. The story itself is devoid of any real sustenance and gives the reader no insight into the larger picture of the book. The writing seems really questionable and erratic. Aquaman fighting modern day Pirates was entertaining but what the heck was a boat full of children doing out in the middle of the ocean? Scenes like that make the rest of the story dubious. For a book coming off the heels of one of the biggest DC events in history, this series isn’t getting the job done. Perhaps the hype-train got a little too big for the tracks and derailed itself. One thing’s for sure, if this title is going to be as important as Blackest Night it needs to tell a story that’s just as important. Otherwise this issue and series will only be known for Black Manta’s brutal and violent return.

David Finch apparently forgot how to draw chins or that lantern is stretching Hal’s face on the cover. Either way it’s really bad. Follow me and be really good on Twitter and ask me anything on FormSpring.