By: Justin Moody | Comic Reviews | August 11, 2010
Brightest Day has been another experiment in the release schedule from DC Comics, it is okay at best and often times redundant and boring. With issue seven, finally, the story opens the front door and lets the readers in. No more mystery of what the hell is happening and how long can we jerk the reader and the characters around. No more recapping the same event over and over, no more veil over the eyes. The fact is there is a simple mystery going on: Why are the resurrected twelve back? The simple answer: To protect the world.

In issue sixth the "white lantern/light" reminds Boston Brand that he loves cheeseburgers, so he gets a damn cheeseburger. Brand a.k.a. Deadman and Dove enjoy their meal at a small diner. Over the meal Dove confesses that she feels connected to Brand and the white light. If you found Hawk annoying in the previous issues, don't worry he's still annoying, this time breaking a juke box for playing the Dixie Chicks (Do they still make music?). Dove explains that she's there to keep Hawk in check and Hawk is there to protect Dove. Hawk plays the over protective brother to Dove as it's clear she likes Brand, who can also sense it. 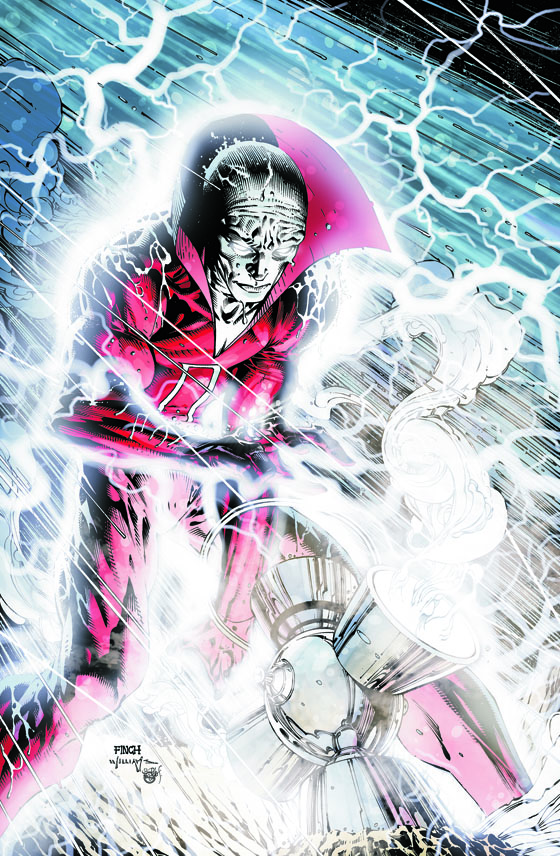 The white light rains on the meal by teleporting the three to its location. It also changes them into their costumes... I guess it can do that. The white light then finally explains why Brand has been brought back to life by giving him a White Lantern costume. The light then continues bouncing around the world finding the other resurrected twelve and giving them their individual missions. It would be all too easy to spoil it, but it would also take a lot to recap the very simple events that transpired. I will give you two though. As the white light finds Captain Boomerang it tells him to "Throw the boomerang at her", the "her" being Dove. When it comes back to Hawk it tells him, "Stop the boomerang" and shows what happens if he fails. Brands mission is to find a new entity protector for earth, he is essentially the Mogo of the White Lantern Corps which is very cool.

It took seven issues to get to the heart of the matter and frankly this book shows that DC was more concerned with the schedule than the product. It came off as a gimmick right from the start when the book was pitched as a bi-weekly series and no other information was giving. Now that it's half way over it's easy to see that this series could have been half of what it is.

The biggest problem with the story is that the mystery isn't mysterious. Good mysteries give the read a chance to figure it out before hand or at least follow along with the reveal. The mystery of the resurrected twelve was more of just a question awaiting an answer. No one tried to figure it out and then the writers just handed the reader the answer while telling the characters at the same time.

The art has become irrelevant at this point. It's just typical DC shenanigans throwing as many artists on a project to make sure the book ships. As the white light bounces around to all of the characters (over half of them being seen for the first time in the series) the art switches so much that it loses all shock and awe. There's no crescendo or huge exposition just bland panels of varying art and style. The glue that continues to hold the art together is the coloring and it's just not enough to excuse the mess.

This issue was good on its own merits but doesn't have a shot at saving the series as a whole. If you've been reading all along then you'll probably continue to do so much like I have. If you were thinking of picking it up in a trade... just wait for the wiki recap that will be up after the series completion.

Lastly the David Finch covers lack any imagination and pretty much suck! Follow Dustin on Twitter @EnterTheHero. Disagree with the review? Tell us why!