By: | Comic Reviews | December 18, 2011
It has been a while, folks, but I am back. I figure, what better way to celebrate this entirely ceremonious occasion than a Buffy review? Truthfully, I imagine there are a great many ways that would be better, but here we are. Issue #4 finishes out the first story arc of Season 9, so this gets to be the book that dictates how this run starts and where the overarching story is going to take us. To put it another way: this could have been the issue to shake up the low key formula and hint at really big things to come. Instead, we get more of the same.

The story picks up right where the previous issue left off: Buffy is in a nest of dead vampires and about to be attacked by the kid who absorbed all their strength. Now that Buffy has eliminated all new magic from the world in the events of Season 8, the cosmic counter-measure is that this random guy is given the ability to absorb all the magic from whatever source is still on Earth. This 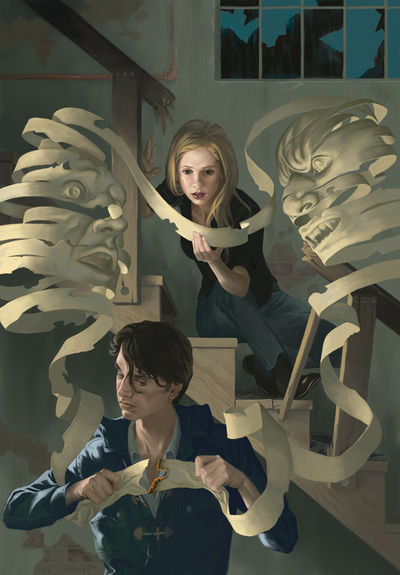 includes vampires and slayers. The more complicated, almost ret-con of an issue, is that newly created vampires are just mindless beasts, since no new magic demon can come to the world to take them over. So, when magic-sucking-guy's girlfriend got turned into a mindless vampire and he unwittingly sucked the magic from her, essentially killing her, the mysterious future villain pointed his vengeance at Buffy. Now we are all up to date with the ridiculously convoluted context of this issue.

How then, I pretend I hear you ask, is all of this build-up resolved? They fight. Honestly, that's it. First Buffy fights him, but he is too strong. Then Spike shows up with a demon who claims to be down for a world without magic, but both of them are taken down in about a page. Finally, it all ends rather climactically. I won't spoil how the Mid-Big-Bad is defeated, but I found it pretty forgettable as far as big fights go.

After that, everything just sort of trails off. There is a glimpse of the enemy that put the guy up to all of this, but this person does literally nothing, except express intent to kill Buffy, for which honestly, I kind of got the impression without being told. A couple conflicts that were raised in the issue just prior are resolved, but it was never anything that I expected would stick. I think where this issue fails is in a total lack of tension. If this villainous character or having Buffy on the run from the police had been built up over several issues instead of one, then I could have seen myself buying into it a lot more. This easily could have been a pretty big story. Instead, it can be likened to a single episode of the show and there was just not enough there for it to be memorable.

To be fair, this is not a bad issue. It is just more shallow than I would have liked. Dialogue still has enough of the Whedon style, but Buffy's cutesy phrases are getting to sound a little forced. The art is the same as it has been without any especially striking images, despite there being a boss fight. The reveal of the shadowy puppet master was not interesting and there was a lot of missed potential. If you are a big fan of guys with glowing green hands, then you will absolutely dig this issue. Just be advised: that is about all you will get.
Rating
5.5