Bulletproof Coffin's trade paperback came out last week, from Image Comics. This book is part Madman, part Twin Peeks meets the golden age of comics. The book is brought to us by the creative team of David Hine and Shaky Kane, both characters in this story. At first glance, new readers might confused this book with a Mike Allred one, as the art style of the book might look similar to Mike's style. But don't let this fool you, this is not an Allred clone. Its been a while since Mr. Kane has published something, but with this series it feels like he never stopped. Readers might recognize a whole plethora of golden age creators that influenced this book. Steranko, Kirby, Mobeus, Stan Lee are some of the cogs in the big machine. In fact this book is a love letter to comic book creators and a social commentary on the big companies that have taken advantage of said creators.

The writer has a very technical approach to the story as time travel elements are worked into the story in a Donnie Darko way. Every issue features a spotlight on every superhero character that was introduced in the book. Every character is a homage to different character archetypes of the golden age, including pulp hero, EC comics horror, a Shenna like character and a weird Sci-fi character. The story is also a Kafka like dream/nightmare. Like the comics of those days, the book includes ads from the golden age comics it features. The ads included are simple paper toys,spotlights, next issue previews, pin ups and fake catalog offers. 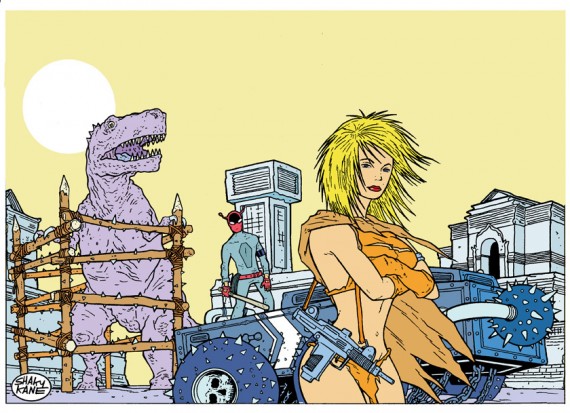 The creative team on this book does a exceptional job. The writing is solid as the ambience of paranoia and dream like essence dominates every chapter. Great job on the writer (Hines) for maintaining the right tone on a story that could have gone the ludicrous way. Since this is a story within a story that deals in both the fantastic and in a grounded reality, is not a easy task for a writer to keep the story from not confusing the readers. In fact it is the contrary, the story keeps the readers on the edge as we try to figure out wether our main character is crazy, dreaming or is it all real? Also the insight commentary to the two comic company giants and their poor treatment to the golden age creators that built said companies, is done in a entertaining way without being too preachy or critical. We see how these creators might take big sums of money for their silence. It is a Kafka critique against the big comic companies as well against the creators selling out. The bad thing about the story is, that it might be a quick look into a rich universe that might never be written again.

The art just fits perfectly into the story, as it all has a golden age grotesque modern twist to it. The storytelling pace changes perfectly into every different character, it is quite noticeable that this happens every time they showcase a golden age comic book of the different characters. The downfall of the art is that now a days to new readers it might resemblance Allred's style. Kane's art is at the top of his game, it seems like he never went away. Rich in detail, this project is one of Kane's best work as it looks like a lot of passion was drawn into the book.

This is what the story is about: Steve Neuman is a Voids contractor. He cleans houses for the dead when he stumbles into a couple of rare golden age, Golden Nugget Comics.He notices that something is wrong. Now Big 2 publishing has bought all these books and canceled all of them since the 1960s, how come the ones that he found smell of fresh ink?  Things get weird, when a TV he got from the house, shows how the late tenant got murder by some shadow men. Steve goes back to the house and finds the Coffin Fly costume and he dons it.

Then four old people dressed in the costumes of the golden age comic heroes tell Steve that the shadow men are going to kill all of them. Steve travels through a portal in his attic to a futuristic place known as graveyard world (the chaotic zombie, future of planet earth) it is there, that Steve realizes that he is destine to find the comic book creators so that they can change the world. Things get weirder when his life is connected or gets drawn into these comics. The shadow men are after Steve and he doesn't trust his family, paranoia strikes his mind but Steve is determined to find the creators (Hine and Kane). When he does the shadow men finds them and offer the creators a big sum of money to stop them from printing more comics.

The joy of the book is the glimpse into the golden age characters, the references to creators and the industry. Is a self contain story with rich detail both in art and story, it is one of those reads that you might enjoy to read a couple of times especially in a collected edition.

Overall Score - 8.5/10
*Good for both New readers and comic lovers*