By: | PC Reviews | February 27, 2011
Back in the 90s, when first person shooters were starting to get more popular, games had a lot of personality and over the top mannerisms not found in today's shooters, arguably for better or worse. Over the years, though, the first person shooter audience has become fascinated with more realistic, and relatively subdued shooter experiences. As a result, the fact that Bulletstorm, an over the top, stylistic and profane first person shooter, even exists at this point is something of a miracle. Now that Bulletstorm is out on shelves and in digital storefronts, the question has to be asked; is this throwback any good? The answer, happily, is yes. Bulletstorm is fantastic. A very fun game that could even attract some of the most hardcore Call of Duty players, if they were just looking for great shooting mechanics. The problem is, is that Bulletstorm doesn't have much value for your $60.


The story in Bulletstorm casts you as Grayson Hunt, a down-on-his luck space pirate who's just crash landed on the planet Stygia with his fellow soldier Ishi. Hunt has crashed on the planet due to his attempt to ram his ship into the Ulysses, a military flagship with his nemesis, General Sarrano on board. Why Hunt wants to kill Sarrano, and each character's motives are revealed throughout the story. The story's pacing is a bit off, with all of the revelations occurring near the end of the game, but overall it's a good tale. The characters are deeper than you might think, and the voice actors handle the profane script rather well. The amount of effort put into the storytelling and world in Bulletstorm is pleasantly surprising, and works well too. 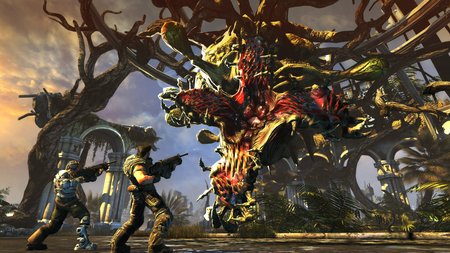 The story is a nice surprise, to be sure, but what Bulletstorm advertises and defines itself with is the core gameplay, or what it calls "Kill with skill". This "Kill with Skill" system is really what serves as the backbone of all of the game modes in Bulletstorm. Using a generic points system, the game rewards you for killing more creatively and in several different ways. Of course it looks cool to kill your enemies creatively, but the game gives you further incentive to do so. In the campaign, you need points earned from killing enemies to purchase ammo, weapons, and upgrades. The campaign definitely gets harder over the course of the game, so you need those points to do well and survive later on. The skill system is very rewarding, though there are too many times where skill shots you swear you pulled off don't get counted. This aside, the skill shot system is rewarding, encourages variety, and has a lot of potential for expansion in sequels.
The weapons that you use help a lot in making the skill shot system work. You can carry up to 3 weapons at a time, though you always have to carry the standard assault rifle, the Peacemaker Carbine. As you progress through the campaign in Bulletstorm, you unlock new weapons, such as a four-barreled shotgun, a flail gun with grenades on each end of the flail, a cannon, a sniper rifle that can guide bullets, and more. Each weapon unlocks several skillshots, and each weapon has an unlockable alternate fire. This gives the game a lot of variety, and it helps that the weapons are satisfying to shoot.
The thing that keeps Bulletstorm fresh over it's 6 hour running time, however, is it's level design. There's a lot of variety here, with the standard shooting mixed in with on rails sequences, vehicle sections, and some other fun twists on the shooter formula. Even when there isn't a new gameplay mechanic being introduced, the level design gives you interesting scenarios and new skillshots for your foes. This may be the only shooter I've played where you can electrocute an enemy while intoxicated at a disco with "Disco Inferno" playing in the background.
This makes Bulletstorm sound like something everybody should buy, but it's not, the main reason being that Bulletstorm doesn't give you much to do after you've beaten the campaign, which lasts about 6 hours, with next to no replayability; seeing as some obvious features are missing out here, like a New Game+ mode that lets you bring your upgraded end-game tech to the beginning of the game, or campaign online co-op. These are some things that could've added value to Bulletstorm. 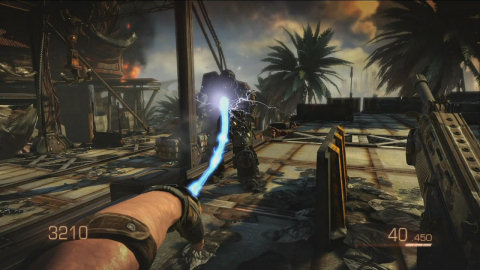 The things that are added to justify the $60 pricetag don't actually work out that well. The Echo mode is a leaderboard mode that cuts out parts of the singleplayer and asks you to go through as quickly as possible, with as many skillshot points as possible. This sounds fun, what with Bulletstorm's great gameplay, but the lack of upgrades means there's no persistent reward, and the lack of dialogue makes the game lose a lot of it's personality in Echo. If you want to play with other people at the same time, you can play the cooperative Anarchy mode. This is essentially the horde mode from Gears of War 2, except you not only have to survive, you also have to reach a set amount of skillshot points. This is fun for a little bit, but to actually do well in the co-op you have to be very coordinated, something that makes Bulletstorm lose some of it's chaotic feel. It's also hard in Anarchy mode to reach that perfect balance between total coordination and complete chaos while still having fun. You level up and earn new weapons like most first person multiplayer shooters, but it doesn't have the same appeal when coupled with the less than thrilling online gameplay.
The presentation in Bulletstorm is great. This is an in-house game from Epic and People Can Fly, and it uses the Unreal Engine, so of course it's going to look nothing short of spectacular. The animations are fluid, the textures are detailed, and unlike some Unreal Engine games, the colors are quite vibrant and alive. The framerate on the PC version is buttery smooth, something that I haven't seen with a lot of multiplatform games on the PC lately, so that's a nice surprise. The audio part of Bulletstorm is nearly as good, except for one dividing point that I'm sure you know about at this point; the dialogue. It can get on your nerves at times, but I eventually got used to it, and started embracing it. Once I did that, I didn't see it as a problem.
Overall, Bulletstorm is a really good game that costs a bit too much. There isn't as much value here than as other recent first person shooters, which could be a problem for some. However, the gameplay is different enough from the current shooters that Bulletstorm is still worth it if you're tired of modern military shooters. Even if you do like the shooter standard, you should at least check out the demo, which will be coming out for the PC soon.
Rating
8.3