Bullied or Receptive? When Should Devs Listen to their Fans?

You can't please everyone... especially in the world of art. The definition of the word "art" literally means "an expression or application of human creative skill and imagination, typically in a visual form such as painting or sculpture". The creative processes in video games development such as game design, 3D modeling, narrative writing, etc. all contain large amounts of artistic merit – fair to say that it's plausible to accept video games as a form of art. While most gamers won't approach video games as an art form, it's important to understand that like any piece of artistic work, everyone will have their own opinion on the final product. As art is a creative form of expression, should game developers stick to their guns, or bow to the wishes of their fans?

In March, Bioware's Mass Effect 3 saw a hugely negative fan response in reaction to the game's ending. The ending to ME3, which was supposed to solve many unanswered questions through the series, faced criticisms over its unavoidable plot holes, character and narrative inconsistencies, and general lack of closure. Mass Effect gave players their own sense of unique customization and ownership of the universe, which is why so many felt cheated at the end of Mass Effect 3 due to its almost indistinguishable endings that made some people feel as if their choices were now completely pointless.

Fans set up numerous campaigns demanding a better ending to the game; some complaints even reaching companies such as the Better Business Bureau and the Federal Trade Commission, since indistinguishable endings and ignored player choices led to claims of false advertisement against EA and BioWare. The number of complaints were too much for BioWare to ignore, and the Mass Effect 3: Extended Cut DLC was later released for free download in July. 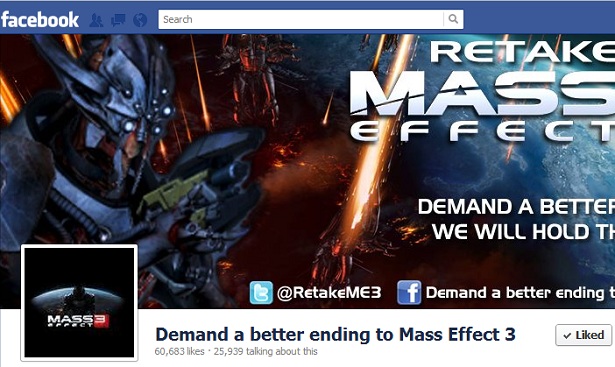 This is the first case of its kind in which a developer has acknowledged criticism to that extent and were pretty much forced to release extra content for their product. It's understandable, due to the weight of the complaints received, but could this pave way to a new era of fan control in the future games? If this is the case, to what extent, if any, should developers listen to their fanbase when creating a title, and could fans be limiting a developer's creative freedom?

It's a touchy subject, especially due to limited amount of freedom that development companies have in terms of meeting demands of the publisher. If you think developer's have 100% creative freedom in creating the game they want, then you're sadly mistaken. In terms of the games on our shelves today, there's a constant battle between the publisher and developer. In most cases, the publisher knows what kind of game they want released. They see what's selling and they do their best to match it, especially in the case of franchises - “Title X is doing well, let's try and make a game that will appeal to fans of that title” or “Title Y sold really well, for the sequel, we need to keep XYZ elements of the game with little change”. Innovation and creative design is thriving in the indie market place with new IP's, but due to fear of sale figures, we're seeing less and less of it in the games on our store shelves today. The bottom line is, publishers want to stick with what they know sells best – the gaming industry is a business after all, and a publishers priority is to make profit. It's often a battle between the developer and publisher over creative freedom, best demonstrated in Free Radical's battle with Lucas Arts over Battlefront 3, which can be summarised in the video below

Warning, contains explicit language and crude humour (this was created by a member of Free Radical, after all)

The shaky development of TimeSplitters 4 shows things in a different light, since fan reaction was actually seeked. While developer Free Radical entered administration (bankruptcy) during the development stage of TimeSplitters 4, the company couldn't find interest from a single publisher during the game's production. Surprising, considering the efforts of the first 3 TimeSplitters titles, but the main reason for the lack of interest was due to worries of strong competition from the other FPS' titles – they didn't feel TimeSplitters' arcade-like gameplay and “cartoony style” would stand a chance against other shooters.

What's interesting is the route that Free Radical, now Crytek UK, have taken to get TimeSplitters 4 published. Since its descent into gaming purgatory, Crytek are now asking for help off their fans. The CEO of Crytek, Cevat Yerli, is urging their fans to raise awareness via social networking sites such as twitter and facebook. Cevak has expressed his opinion towards the TimeSplitters fan base, saying he “unfortunately doesn't know how big the fan community is.” This has lead to a facebook campaign called '100,000 strong for TimeSplitters 4', urging fans of the series to collaborate their efforts in asking for a release of TimeSplitters 4.

In the case of something like this, it's best to gauge fan appeal. It's been demonstrated that TimeSplitters 4 won't be touched by publishers at this moment in time due to worries it won't perform in the market. By gathering support from fans, Crytek could eventually release a game that has been released due to developers and publishers “listening to their fan base”. If developers are willing to listen to their fans, should they let them dictate what direction a game should take during development? No, but I think there does need to be a certain degree of balance. Good things can get ruined if developers don't take note of what their fans want. Franchise titles can quickly change and become stale, slowly drifting away from what made them so special in the first place.

Sometimes it's good to put your product out in the public to analyze feedback. The recent trailer for Hitman Absolution sparked controversy due its content. The trailer, which can be seen below, shows Agent 47 brutally gunning down a crowd of semi-clad nuns, has sparked anger due to the complete lack of context the scenes contained. The developer has since released a statement which reads,

"We learned from the trailer that we really needed to give these characters some context and some backstory. We're working within the game - within that level - to build these characters up before you meet them. That way you know what you're getting and you aren't put off by them."

I personally find this refreshing. IO Interactive (the dev) has taken aboard criticism and responded accordingly, fully acknowledging the fact that the trailer has upset some of their fan base. It goes without saying, however, that IO Interactive's resolution has presumably come about due to their worry of the potential loss in sales figures. It can't always be a case of developers trying to satisfy everyone. The titles that I have enjoyed the most in the past have had no interference from their fan base. Setting out to ask for feedback almost gives the impression that you're not happy with the product you had in the first place, so why should the fan base have faith in it now? Every fan is different, and each will have varied impressions of how they think the final product of a title should play out. At the end of the day, developers should have faith in the product that they are working on.

Another problem that developers and publishers face is pleasing two varied target audiences; the 'casual' gamer and the 'hardcore' gamer. More and more people are being introduced to gaming, especially due to the release of the Nintendo Wii, and 'family-friendly' peripheral devices such as the Kinect and Playstation Move. This can lead developers with a difficult choice, especially when faced with pressure from publishers: do they make the game that they truly want to make, or do they create a game which can appeal to a broader target audience? We seem to be in the middle of an age where many titles are slowly changing their genre routes to appeal to a larger target audience; Resident Evil's departure from survival horror to action and the dumbing down of titles such as Final Fantasy XIII being two big examples.

If developers were to listen to their fan base, they would have an extremely difficult feat ahead of them. It's almost impossible to create the perfect balance when looking to please everyone, and for the time being at least, I believe that developers should trust their gut instinct when creating a title. Unfortunately, the ever-growing pressure that derives from the publisher is unavoidable. If developers are being forced to listen to anyone at the moment, it's the publishers - not the fans.