"The Iron Giant has been transformed successfully"
By: Russ Matthews | Movie Reviews | December 10, 2018
It's hard to imagine that it is has been 11 years since Micheal Bay brought the world the first live-action Transformers film and pushed Shia LaBeouf and Megan Fox into the spotlight along with their robot counterparts. This multi-billion dollar franchise never set any scripting standards, but these films provided fans with the action and CGI-effects that became synonymous with these toy inspired creations. Over the years, the movies began to diminish in their quality and ability to draw people into theatres, but this did not deter Paramount and Hasbro from reconstructing this series.  What better way to reintroduce Optimus Prime and his minions to the world than to go back to the era when they were introduced. This prequel goes back to 1987 and allows audiences to experience the devastation of the home planet of the Autobots and Decepticons, which leads Bumblebee (voiced by Dylan O’Brien) to be sent to earth. His mission is to establish an outpost for the surviving Autobots and allow the robots an opportunity to regroup in their battle with their archrivals. 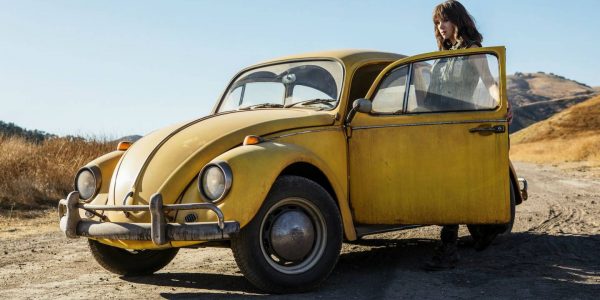 Upon arrival to earth, the yellow space warrior happens upon a US military exercise and is attacked by an elite fighting force led by Jack Burns (John Cena.) Even though Bee tries to prove he is not there to cause harm to humanity, the team continues to pursue him through the forests of California, but he does manage to escape. While on the run he is heavily damaged and loses his memory cells and transforms into a vintage Volkswagen Beatle before losing conscience.  A teenaged girl named Charlie Watson (Hailee Steinfeld) manages to find the Autobot in a local junkyard and works a deal to take the broken down car home as her own. As she begins to work on the car, the young mechanic manages to bring the robot soldier back to life. The two must work together to discover the robot’s origins and memories, while Charlie works through her grief of losing her father and adjusting to existence without him in her life. Their action-packed journey leads to the eventual battle between the Transformers coming to Earth and personal revelations for the troubled teen.  Over these the years that these Transformer films have been produced, the only elements of this that proved any hope for this franchise is that Michael Bay is no longer at the helm and the nostalgia of the 1980s. Director Travis Knight (Kubo and the Two Strings) does not change the essential elements of this familiar storyline that has been established throughout the years, but does capitalize on the era that gave birth to the toys and characters that have come to influence multiple generations.

Only being the second director to helm this franchise, he adds his touch by borrowing from some of the greatest films of the past few decades. By using the elements of The Iron Giant as a structure to build upon with aspects of E.T. and The Breakfast Club to accentuate the nostalgic flare, he provides a revamp to the franchise. What looks to be a mere reboot turns into the heartfelt tale of connection between human and machine wrapped up in a coming-of-age outing. Bumblebee proves to be the best installment of the Transformers since the original and does provide hope for the inevitable additions to come.  What should parents know about Bumblebee?  Even though this film series is based on toys by Hasbro, Bumblebee is not necessarily for the little ones. Going along with some young friends to the screening, the determination was that this is a film that is ideal for pre-teens and their parents. The parents will be rolling at all of the nostalgic elements from their youth, while the younger set will enjoy the humour and action. The screenplay does contain a positive message about the value of families and fathers, while not taking itself too seriously in the process.
Rating
8.0
Pros