Remember back in 2010 when Bungie announced they were parting ways with Microsoft's exclusive franchise Halo. Of course you do! Everyone does, and what they've been up to has been an even bigger mystery.

While it's been confirmed for awhile that their new game would be called Destiny, no one has really known what the game would be about, or more importantly, what it would look like. Rumors have swirled around for several months now saying that it would be another sci-fi shooter franchise, but again, nothing concrete. While today we have a first look at leaked concept art from the game, confirmed by Bungie. Someone apparently found a USB drive at a coffee shop with all of this great concept art and some key bullet points on what the game is about. Accident or intential? You be the judge on that one. I personally think it's a marketing scheme to build hype for a Spike VGA reveal, but that's just my thinking. 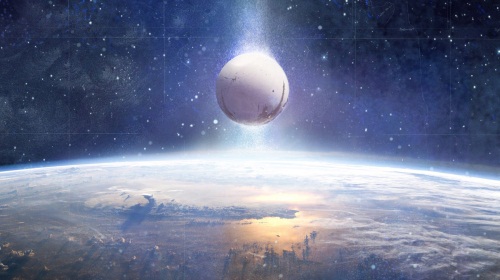 According to the leaked intel, the game takes place on a war torn Earth. Once again, the conflict is between humans and aliens, but this time players take control of humanity's last hope, "knights". As seen in these concept art photos, the knights seem like a force to be recokened with. The company had the following to say about the leak: “Go ahead. Take a peek. It’s alright. We weren't quite ready, but we will be soon, and we can’t wait to finally show you what we've really been up to. Stick around, we haven’t even started yet.”

It's also interesting to note that in the final concept art picture, the company says the title will be released on both Xbox 360 and Playstation 3, making this a current gen game.

So what do you think of the leaked concept art? Should Bungie have stuck with the Halo series or are you excited to see them branch out into something different?