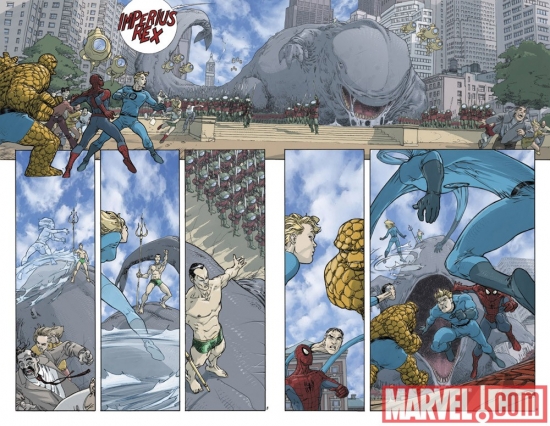 Another Marvel announcement from C2E2 (Chicago’s Comic & Entertainment Expo), Christos Gage (Avengers: Initiative) and Mario Alberti (Amazing Spider-Man) team up this July to bring you Spider-Man/Fantastic Four a companion series to Spider-Man/X-Men.  Gage’s take this time around is to capture different points in Spidey’s and the Fantastic Four’s history together. Each issue will deal with his relationship with one of the Fantastic Four and they’re perspective of each other.

Much like Spider-Man/X-Men, each issue will have a new villain that the group will deal with. The first issue features Dr. Doom and Namor. Later in the series they face Venom symbiote without a host and the Skrull De’Lila. The story will jump between four era’s of the Fantastic Four including: Silver Age, Post Secret Wars, New Fantastic Four and Modern Fantastic Four. Again, much like Spider-Man/X-Men there will be a mystery running through the series and tying into each era.

To read the full article head to Marvel’s new section.