To the untrained nerd/geek, a movie entitled, Boy Wonder sends the vibe of a superhero movie. Granted it contains the structure reminiscent of a comic character origin (as any character driven narrative should have). Boy Wonder isn't so much a comic book super hero film as it is a revenge film.

At an early age a Sean Donovan (Caleb Steinmeyer ) witness the murder of his mother. This in turn causes him to lead a very antisocial life consisting of no real friends, just a few acquaintances. Living alone with his father, Terry Donovan (Bill Sage) the two of them keep a fragile relationship that was built from past abuse in Terry's heavy drinking days. Sean turns most of his free time to academics getting him straight A's. Though still haunted by the loss of his mother, Sean keeps the hope of finding her killer and one day bringing them to justice. 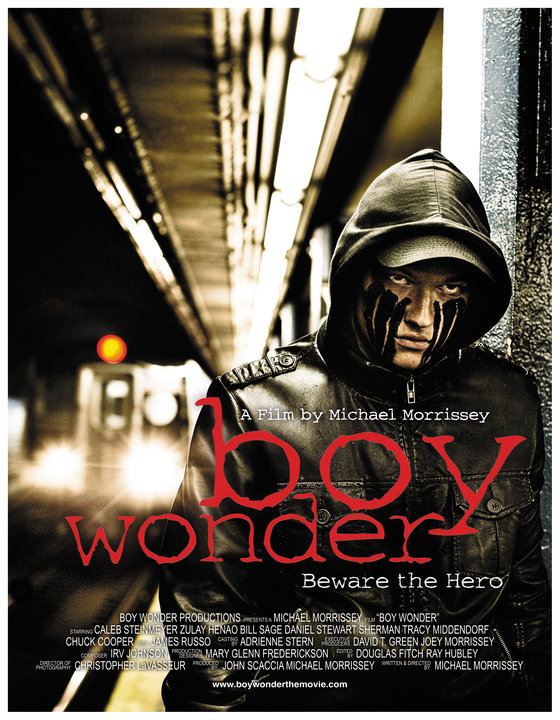 Enter Detective Teresa Ames (Zulay Henao ) who was the arresting detective in the Larry Childs (James Russo) case. A huge case that got her promoted to homicide. Unfortunately it was bitter sweet and cost her family life. Once in her new role Teresa meets Sean for the first time. Who is allowed to peruse through mug shots in hopping to find the scum that killed his mother. Sean uses this to access a slew of scum bags to extract his own brand of justice.

As Sean and Teresa start forming an awkward friendship/relationship, while Sean hunts for these random criminals he uncovers more clues about his past and himself. Sean's quest picks up as he discovers some unknown bits about his father. Unbeknownst to Teresa, she follows Sean's vigilante spree looking for an end game.

Boy Wonder is written and directed by Michael Morrissey. The first time director does a decent job of creating an interesting narrative in Boy Wonder. The film only hits a few pacing speed bumps due to some awkward dialog between Caleb and Zulay. This falls mostly on Zulay's shoulders, due to the fact she never really seems comfortable in her role as a detective. Very rarely does she emit any confidence while on screen. Caleb Steinmeyer's performance takes a little while to warm up to but when he gets going he plays the part well. Some other decent performances are that of Daniel Stewart Sherman for some chuckles as Zulay's partner and Bill Sage pulls out some pretty good intensity and range throughout.

Along the way Morrissey treats the viewer to some fun action scenes, one being on a subway all la some brass knuckles and the other at a house party. The movie does have a few other surprises along the way (the ending being one of them) in terms of dialog and performances that does keep things interesting.

Overall Boy Wonder is an entertaining ride through Sean's physique. It has that slight flair that plays reminiscent of The Punisher but manages to keep in a home brew do-it-yourself kind of vengeance. Morrissey shows a lot of potential for a first time director. He has the room to grow into something real special and it would be a treat to see something from him real soon. More info on the film can be foundon the official web site .