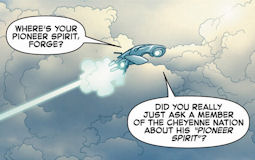 Cable and X-Force pull off a prison break while Scott Summers arrives for a fatherly chat with his son. It’s an exciting premise for an issue but one that isn’t really lived up to here. Though the prison break is fun, Dennis Hopeless just doesn’t deliver on the father and son moment the cover hypes for this particular issue.

For his own cryptic reasons, Cable needs a secret alien prisoner out of the Raft. This has led X-Force to bust the alien’s ship out of S.W.O.R.D. impound while Domino and Boom-Boom fake out Raft security by making it seem like X-Force has come to get Colossus out of jail. As far as plans for, this is a good one. It’s just complicated enough to seem like a believable strategy without being so complex that it’s hard to follow as a reader.

The interplay between Colossus and Domino is one of the story’s highlights as Hopeless portrays Colossus as struggling with his senses of morality and responsibility while Domino is in his face playing the part of the devil on his shoulder. Piotr is trying to do what he thinks the right thing, having turned himself in and accepted punishment. But there is Domino confronting him with the fact that there’s really no good that he can do by staying locked up. I’m enjoying these two. Their new relationship isn’t one I’d care to see go the distance, but in this moment, it’s working well for their characters.

They aren’t the only duo that Hopeless has found a surprisingly strong chemistry for, though. I was pretty skeptical at first about having both Forge and Dr. Nemesis in this book. Why have two science guys? Isn’t it redundant to have two characters in one role? Now, I don’t think Hopeless has completely sidestepped my concerned, but man, he has done something good with Dr. Nemesis and Forge. They’ve formed this fun doctor versus engineer dynamic that really helps keep them apart as two distinct characters, even though they are both occupying the position of the team’s science resource.

Then, there’s the addition of Boom-Boom. Seriously, I love Tabitha. I was so happy to see her show up out of nowhere last issue. Hopeless shows off a nice handle on her character too. I’m really hoping she’s in it for more than just this story. It’s nice seeing so many X-Force characters actually in X-Force again, especially after going so long without.

So it turns out when you break a dangerous alien out of prison that you have to factor in the part about the alien in question being... well... dangerous. Obviously, things don’t go exactly as planned for X-Force. Hopeless and artist Salvador Lorroca do a good job of not giving us just another forgettable generic alien. I mean, I don’t expect to remember this character years from now, but he captures my interest for the time being.

The other part of the issue focuses on Cable and Cyclops at the S.W.O.R.D impound facility. It’s a decent enough scene but underwhelming as well. I expected more, and I don’t think that was wrong considering the cover. Father and son don’t really get a chance to talk as they get interrupted twice -- first by S.W.O.R.D. security and then by the news that the prison break as gone wrong. All we get is Cyclops telling Cable that he has his son’s back, which is nice. But there’s a lot more than that going on with these two characters. This should have been a meatier scene. Marvel hooked people in with Cyclops showing up, but it turns out there’s not really anything of substance on that hook.

I kind of hope this alien adventure isn’t the start of a trend for Cable and X-Force. I really do prefer my X-books to stay mostly mutant-related. That is what they’re supposed to be about, after all. The occasional space or magic story is fine. But I’d prefer it if these future visions Cable is trying to prevent start to take on more of a direction and that the direction is more tied into the X-verse. I’m enjoying the book right now, but some of that enjoyment will be lost if this becomes a random “nightmare vision of the week” kind of series.

Regardless, Cable and X-Force is a damn entertaining book. Hopeless has found an unlikely chemistry in the cast, helped along by having a really good grasp on all the characters involved. Yes, Cyclops’ appearance is a letdown. But hopefully, Hopeless means it when he has Cyclops say they will talk for real soon.