Cabra Cini comes from a very troubled past. At one point in her life an abusive boyfriend turned her into a prostitute and became her pimp. Not long into that lifestyle she took up crack, more than likely to make herself stop feeling the miserable life she had found herself in. Then one day she couldn’t take it anymore and got out of that lifestyle and habit. She traded crack for Voodoo and started learning everything she could about her new addiction.

The voodoo lead to a new lifestyle choice as she became a voodoo hitwoman; on this day in particular she’s looking for a target that killed a young girl when he tried to drink her blood. The dumb girl idolized the vampire wanna-be idiot and allowed him to foolishly kill her. The girl’s parents were a little less sympathetic about the stupidity of the girl’s death and began tearing about her room looking for clues to why this had happened. What they find is the contact information for the Voodoo Lady… Cabra Cini. 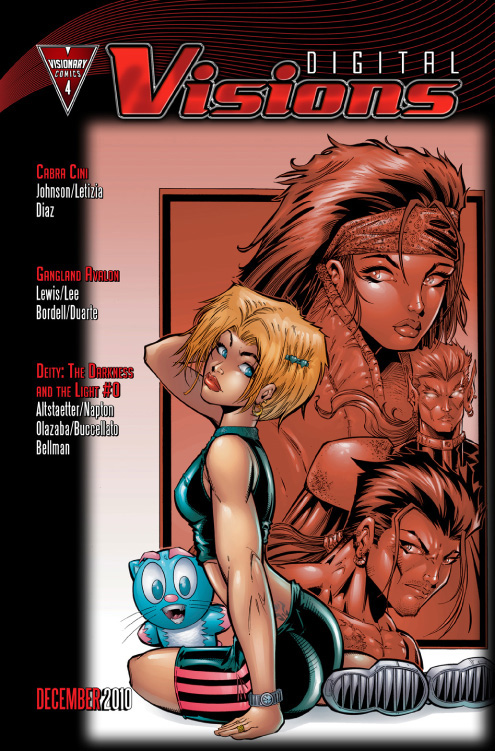 Now Cabra is on a mission to bring in the wanna-be vampire and the fastest way to do that is to take a plane of existence that exists above Limbo called the Infinite. Cabra prepares for war before going into the Infinite as she has become very unwelcomed in the plane. She’s instantly attacked by a guy with a mace and a flamethrower backpack, but thankfully she brought her sword and cuts down the crazy man quickly. The next person that Cabra comes across is her dead pimp boyfriend Ray. She swears that he’s dead, but Ray fools her into believing that his other “hoes” found him and got him the medical attention he needed. Now he’s in a coma and his mind can wander to other planes. He’s been given an offer to screw with Cabra once more which he doesn’t pass up.

After that a pretty big fight breaks out and Cabra finally gets closure on her time spent with Ray and as a prostitute. The story is pretty interesting. The concept of a vigilante that’s also a drug addict is pretty different in comics or the entertainment medium in general. Granted her drug of choice is voodoo, but it’s still very different.

Cabra Cini is written by Sam Johnson and he crafts a very strong narrative from Cabra herself. I would say that the narrative is the strongest part of the story overall, but the dialog really steps up when Cabra is confronted by her ex-boyfriend/pimp (which is fun to say for some reason). Johnson doesn’t hold back anything in their conversation and it makes Cabra a strong character right before the reader’s eyes. She has to deal with the things that Ray is saying about her, own up to them for happening and move past it. It adds a lot of depth to the character and the story. 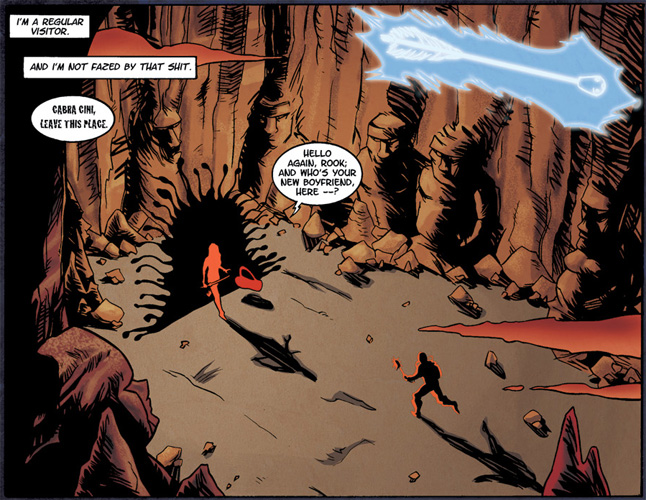 The art is unfortunately not the best, but it works for the story. Artist Bruno Letizia relies on shadows to cover and hide a lot of the characters faces which would work if there was a light source that could create the shadows draping the characters faces. Even still he does a great job of drawing an action sequence that is easy for the reader to follow. I will say that Letizia does a good job of matching the narration and pacing of the story which makes the book easier to read.

This book is free from Digital Visions and comes with four other stories. Some of which I wouldn’t bother reading, but Cabra Cini was worth it. I’m not sure if there are more adventures of Cabra Cini, but it would be a shame not to see more of this character and to see where Johnson plans to take her. You can check out the issue free from Drive-Thru comics who will make you jump through all the usual hoops, but for a free comic I would say it’s worth it. You can also check out the Cabra Cini page on Facebook and even befriend the creator/writer Sam Johnson.