Pregnancy, autoerotic asphyxiation, a dead monkey, and new love interests for both Hank and Karen make this episode one of the best of the series, if not the very best. Our characters grow and evolve all the while the show tells two entertaining stories that exemplify why this show is just so great. While Monkey Business may not as be important to the overall narrative as say The Apartment, last season’s perfect episode, it is funnier and tells a story all its own while complicating the running storylines of the season.

Hank finished writing the screenplay and Charlie couldn’t be happier. Apparently Hanks’ more recent work is brilliant, which leads credence to my theory from last week about him needing chaos, and Stu has arranged a meeting with the eccentric billionaire producer to present the new screenplay. The investor has a deep hatred for Charlie, as seems to be the theme of this season, but invites the group back to his mansion for a reading. Quickly he needs to exit the scene to take care of some... business, which leaves the rest of the party to get wasted and Charlie to add another notch to his belt. The monkey scene is ridiculous just as we could hope, and when Runkle hurls the attacking monkey to his doom, and the following death rattle puts our group in a terrible situation.

Meanwhile Hank and Stu are looting the kitchen with a bad case of the munchies and point out all the cameras to Charlie. I love it when Charlie plays the scared kid role and Hank needs to step in and act as his pseudo father figure in order to get things done. The Charlie/Hank relationship is the most well developed in the show and the best episode rely on their relationship. Seeing the billionaire hanging from the back of the door with his pants down was unexpected and awesome. I was laughing pretty hard, but then when Stu enters the room and the door slowly swings open, hitting the hanging man’s head in the process I completely lost it.

Hank and Charlie are not the only ones dealing with problems as Becca and her band are practicing at Marcie’s house. Coke smurf thinks she might be pregnant and a test confirms her fears. The question now is who’s could it be? Charlie had a vasectomy so that would eliminate him, but it is possible for it to be reversed and for him to have not have said anything, she runs down a list of guys she has been with, but she doesn't know who it belongs to. It would be interesting for the show to continue this plot line in the future. 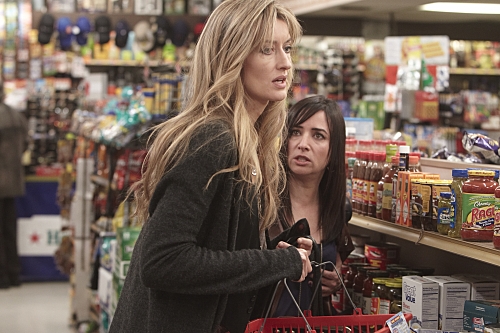 Our favorite couple get new love interests while this is all going on. Hank calls his lawyer for advice on what to do about the situation at the mansion and their sexual tension continues. Karen meets the father of one of the girls in the band and they seem to hit it off. I think we all assume that ultimately Karen and Hank will be together but this season has been steadily pushing us away from that end.

The episode is hilarious that’s true but there is also a very powerful scene at the end. Hank takes Charlie home and is convinced to come inside. There he sees his daughter playing with her band and his sense of pride is destroyed when he sees Karen and her new guy talking and looking comfortable close together. Whoever is in charge of the music on this show deserves a lot of recognition because the music at this moment in the episode is perfect.

This was just a perfect episode of Californication and like last season episode The Apartment you are left wanting more. The only negative about the episode is that it was over far too soon, and if that’s the only thing you can say about it… then its not really a negative thing now is it.