Junis had done it; he had avenged his family and slain the mighty Caligula. Or so he thought. Despite having a dagger thrust through his skull, Caligula carries on like nothing has happened. He also acknowledges Junis as Felix and has dubbed him a good luck charm. In doing this, Caligula demands that Junis joins him at the races, which consists of warriors racing laps in chariots. Perplexed on how Caligula had survived and desperate for another attempt, Junis plays along with the emperor and honors his request.

At the races, the crowd enjoys the event but Caligula soon becomes bored and requests Junis to entertain him. All of which leads Junis and a few other “not so lucky” citizens of Rome to be tied to the front of the chariots. The chaos of the race ensues and Junis somehow lives to bring delight to Caligula. This creates a twisted kind of bond that Junis plays into. Along with that Junis answers to the name Felix and is told that he needs to write the tales of Caligula’s life. But to write about his emperor, Felix needs to live like his emperor. After sharing a bed together, Caligula awakes rambling incoherently to Felix that he wants to die and the things that he has done. Before Felix can get an answer on how to kill him, Caligula’s most prized steed walks in the room and speaks to Felix. 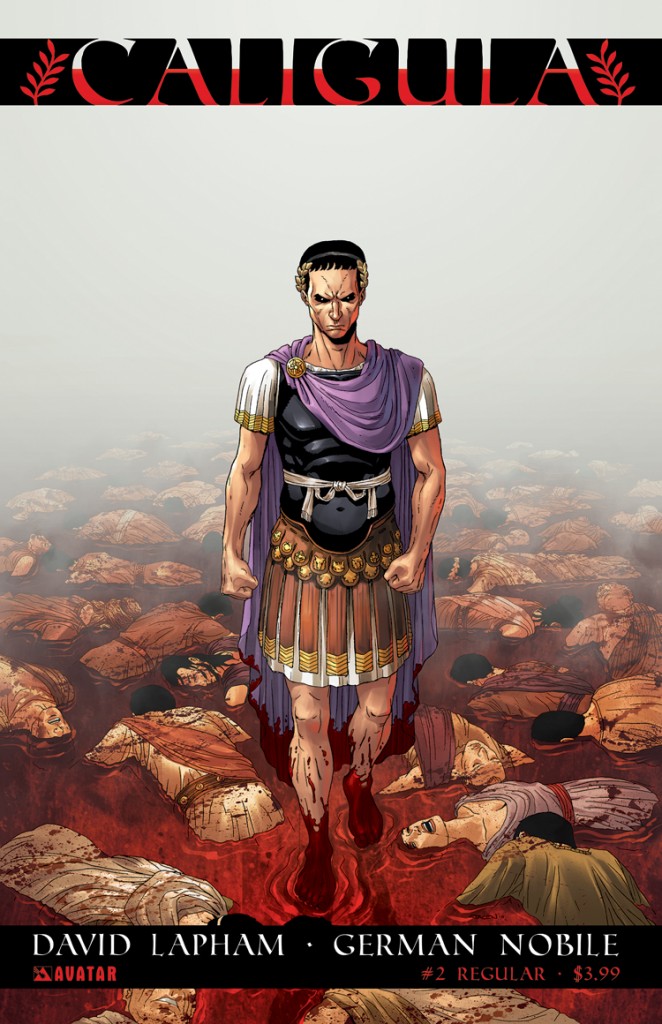 There you go, that’s it. Yep, that’s the end of issue #2. David Lapham (Modern Warfare: Ghost) has done it again with his “How did you like that last panel mofo – is your mind blown?” savoir faire. Soon this man will be dubbed “the master of the cliff hanger,” which is a great thing. Not only that but the progression that this book makes keeps such an entertaining pace as it adds more to this sinister and twisted world. German Nobile’s artwork continues to shine as the landscape changes from crowed arenas to haunting palace chambers. Everything presented is defined and detailed as he brings everything to life in this epic time. A true treat is hidden in the panels where people are being tied to the front of the chariots. The third chariot down has a little person, or an old sick man or a kid strapped to it! Thus making it official that no one is safe from the mad emperor’s boredom. But whatever; it’s brutal and oh-so awesome.

The best part about Caligula #2 is it takes all the things that made the first book great and expands upon it. It mixes up the carnage, it keeps the intrigue, it adds to the characters' growth and it looks great the whole time doing it. But most of all it keeps the reader hooked by making you ask, "What’s next?"  Well, issue three is next and it’s going to be rad.