Treyarch and Activision released the first information and trailer for Call of Duty: Black Ops 3 zombies mode today at San Diego Comic Con. The new zombies mode is called "Shadows of Evil" and is set in the 1940's. As with previous zombie modes, players can fight alone or with up to three other players via online co-op.
Shadows of Evil stars Jeff Goldbum, Heather Graham, Ron Perlman and Neil McDonough. Robert Picardo, famous for his role in Star Trek Voyager, also has a role in Shadows of Evil. His character is called The Shadow Man.
Being set in the 1940's, Shadows of Evil will have period appropriate weaponry. But as you can see in the trailer, it will also have strange weapons and magical powers. Similar to past zombie modes, Shadows of Evil will have machines that players can use that will give them new weapons, upgrades or abilities. One such machine is a candy machine that give player different powers. 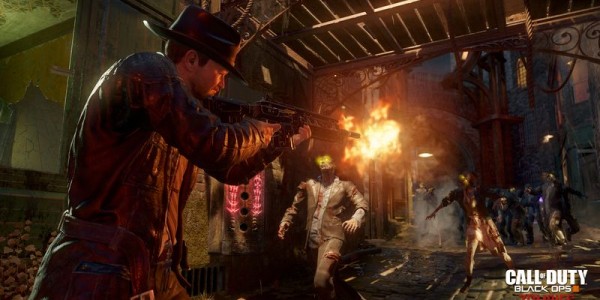 Along with Shadows of Evil, Treyarch is remaking the original zombies map from Call of Duty: World at War. This new version of Der Rise will be called The Giant and the original voice actors will return to play the characters from that first map. The Giant will be a pre-order bonus at Gamestop, in case you were wondering if that was still going to be a thing. Yeah. Pre-order bonuses are still a thing.
Call of Duty: Black Ops 3 will be released on November 6, 2015 for PS4, Xbox One and PC. It will also be released on PS3 and Xbox 360. This August players who preorder Black Ops 3 on PS4 will get a chance to play a multiplayer beta. Other platforms will get access to the beta later.