"Falling Star"
By: Dan Santos | PC Reviews - PS4 Reviews - Xbox One Reviews | November 8, 2016
Following the current trend of futuristic warfare, Call of Duty has decided to push their series even further by focusing on outer space. Call of Duty: Infinite Warfare may look different in grand scheme of things, but holds back any true potential by sticking to its traditional mechanics. Despite the new setting, setpiece moments, clichéd villains, and ridiculous monologues still plague the game. What we’re left with is a game loaded with potential that's too shy to push any boundaries. Infinite Warfare offers a pretty bland campaign. A war breaks out between Earth and Mars. Earth is led by United Nations Space Alliance, and Mars by Salen Kotch, the ruthless Admiral of the Settlement Defense Front who hacks Earth’s planetary defense systems and attacks. Players will take control of a recently promoted captain, who takes a small crew and ship to fight back the SDF and protect Earth life. Sounds all well and good, but Infinite Warfare chooses to follow the Call of Duty cliches leaving the campaign feeling dry. 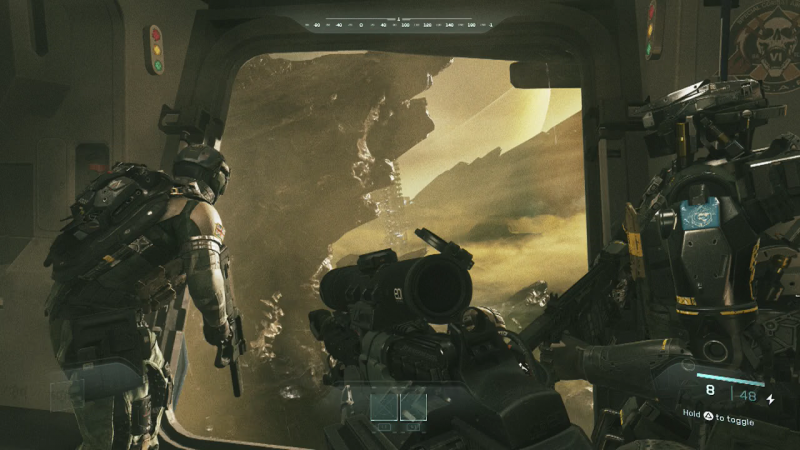 As previously stated, players are in control of a captain, a newly elected captain in charge of his own fleet and crew. Despite this, Infinite Warfare dodges the opportunity to do something creative with the concept. Players are a commander, yet none of your crew respects that. They still treat you like a foot solider, a typical Call of Duty protagonist, they order you about with utter disrespect. Your team commands you to this and that, meanwhile the players should be the ones in command. This sense of ludonarrative dissonance alone ruins the experience. I thought as soon as I got the reins of commander that the game was going to open up new opportunities for gameplay, making for a different experience. But no, it never comes, players will run from point A to point B, shooting baddies until the credits roll. 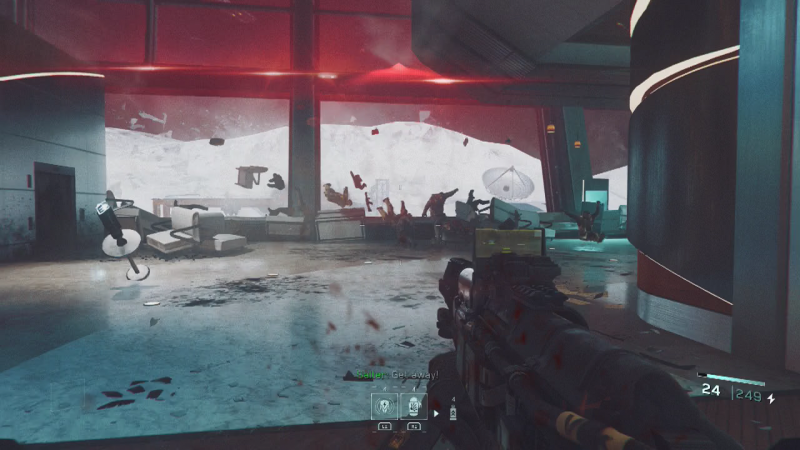 My biggest gripe with the campaign is the lack luster cast of characters. Infinite Warfare seems to try to get players attached to your crewmates so when it kills them off it hurts. The characters don’t get enough screentime to feel attached to. In fact, near the end when characters started dying, noble sacrifice after noble sacrifice, I didn’t really know who each character was. Very different from feeling upset seeing Ghost and crew die near the end of Modern Warfare 2. Even Admiral Kotch, played by Game of Thrones’ Kit Harrington, was a pretty disappointing villain. Kotch fails to create any sort of tension as an antagonistic presence. I was expecting his lack of presence making way for another villain to come along, but that twist never comes. Along with the boots-on-the-ground combat the franchise is known for, Infinite Warfare features flight missions that tasks players to take out enemy starships. This isn’t a tacked-on gimmick, but an added wrinkle into the game’s overall structure. I enjoyed the intense moments racing across the skies while attempting to get a lock on an enemy pilot. While it lacks the depth of more involved space simulations, the dogfighting sequences are a great addition, adding some variety to the game's formula. 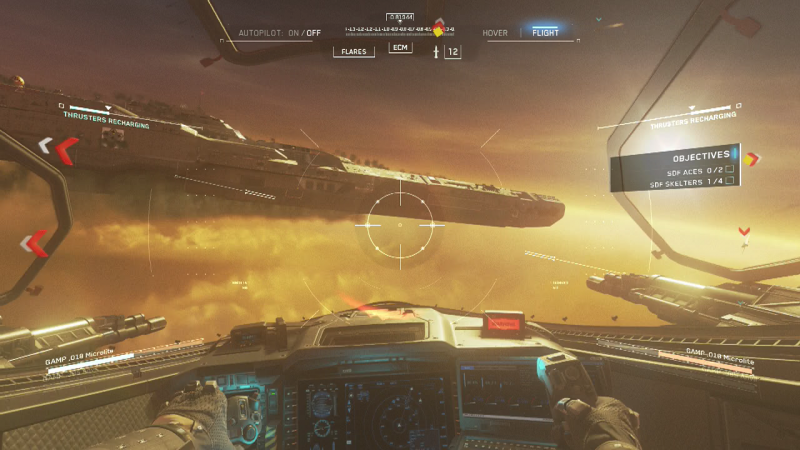 The campaign is short comparable to the previous installments, but there is some extra side missions allowing players to get some extra time with the crew. These side missions vary from infantry-based ship assaults and pure dog fighting sequences. The side missions offer little twists to the game like donning an enemy uniform to assassinate some important SDF members. These missions also have hidden rewards within them like buffs for your character and new weapons. Some fans skip the campaign overall and just head into multiplayer. Unlike the campaign, however, Infinite Warfare plays it rather safe. Players who have Black Ops III will notice the near identical experience. Movement feels the same, with boost jumping and wall running making a return, but overall still feeling slow. Character abilities work the same as well; now each locked behind a specific rig with their own supers and passives. There is even a supply drop system allowing players with a little extra cash the chance to earn epic-tier weapons. For the most part, it’s Black Ops III multiplayer with some added bells and whistles. An added bell is the Mission Teams, where players join factions an earn rewards for completing special missions. Each team is offered missions such as getting kills with a certain class or playing a number of matches. Completing missions rank up a player’s team, netting them special cosmetics and guns. Teams can also help players earn keys for supply crates and salvage. Salvage is used to build guns and use them early. If there’s a special gun you’ve been eyeing, earn enough salvage and you can start using it right away. 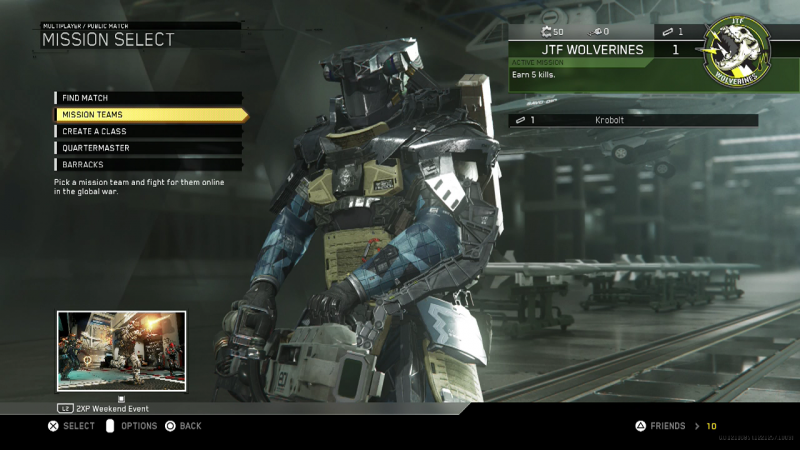 As for multiplayer modes, all of the now expected modes make a return. Traditional modes such as Kill Confirmed, Team Deathmatch, and Domination make a return. Along with those, special modes like Gun Game and Defender, a new mode where players hold a ball and play keep away, also fill the roster. Whatever your playstyle, there’s a game type for you. The Zombies mode makes a return with an added amusement park setting and an ‘80s retro tone. If you’ve played Zombies before, you know how the experience works. A team of up to four players fight to survive until everyone has been completely wiped. It’s always fun to play and with a dedicated team behind you, the fun never ends. https://www.youtube.com/watch?v=-hA3tlz8Mgo Infinite Warfare doesn’t feel like a completely new experience. Many of the flaws and criticisms of previous games are still valid here. Distinguishing enemies from allies is still rough in campaign. I would often find myself using the Trojan scope on my rifle to highlight the bad guys so I wouldn’t attack my closest ally. Another major issue I have is how irrelevant wall running and boosting is in the overall experience. This works in Titanfall 2 because the game is built around this system and it’s used there to speed up gameplay. In Infinite Warfare, I used wall-running once in the required campaign setpiece and never found myself using it again. Lastly, as previously stated, gameplay just feels slow. In shooters taking place in the past, slow gameplay is understandable, but in a future setting it feels unimmersive . Slow gameplay when players essentially have jetpacks just makes for boring experience. A sequel is made to improve upon the previous entry; for Infinite Warfare, that doesn’t hold true. The more I played it, the more I felt Infinite Warfare was tacked on to encourage players to buy the $80 Legacy Edition for Modern Warfare Remastered and just say that a new game was included. But Infinite Warfare doesn’t feel new and it doesn’t hold ground to stay in players memories for very long. With new shooters like Overwatch, Titanfall 2, and Battlefield 1, there is little reason to invest in Infinite Warfare. If you have enough money for one shooter this year, don’t make it this one.
Rating
4.5
Pros