"Call of Duty: Kevin Spacey Has Some Cool New Ideas"
By: Zack Zwiezen | PC Reviews - PS3 Reviews - PS4 Reviews - Xbox 360 Reviews - Xbox One Reviews | November 6, 2014
How long can a series continue to release a new game every year? How long before you tire fans out or run out of ideas? Last year’s Call of Duty: Ghosts seemed to be a stumble for the series. Reviews were mediocre and sales slumped compared to previous entries. Now Sledgehammer has the task of revitalizing the franchise with Call of Duty: Advanced Warfare.
The short story is that Advanced Warfare is better in almost every way than Ghosts. From the campaign, multiplayer to the game’s graphics, Advanced Warfare just feels like a better game. More importantly, Sledgehammer has added enough new mechanics and ideas to make this feel like the freshest Call of Duty in years. 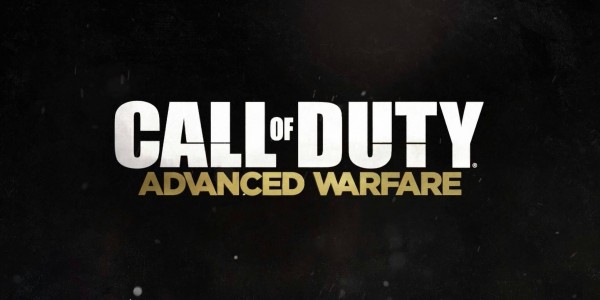 
For some, Call of Duty is a series all about multiplayer. But ever since the first game, Call of Duty has had some great single player campaigns. Advanced Warfare is no different and its campaign feels like three or four giant summer action movies connected together and for the most part it’s a ton of fun to play.
The story and campaign start a bit slow and boring to be honest. You play a soldier dude getting ready to fight bad guys in some war torn city. This opening level is stale. After that lukewarm opening however, Advanced Warfare starts to become a crazy action packed adventure. One of the first crazy things you come across is also the biggest addition to the Call of Duty formula: Exosuits. 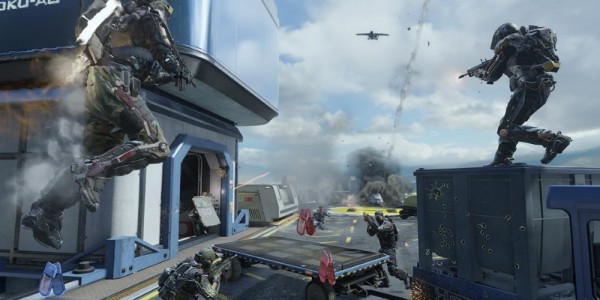 Exosuits allow you to double jump, air dash, side dash and run fast, along with other abilities. Portable shields, cloaking, grappling hooks and super strength are all used throughout the campaign. These abilities elevate the shooting from boring, overdone corridor scenarios to epic and fast paced fights. You will be bouncing around levels, shooting smart grenades, grabbing car doors and punching enemies and sending them flying across rooms. Advanced Warfare makes you feel like a powerful super soldier and the moment to moment gameplay feels more frantic and fun then in any recent Call of Duty.
Most of the missions in the 8-10 hour campaign feel different and many of them introduce new gadgets, tools and weapons to use. Things like mute charges, which cause an area to become silent for a short period of time. You even use laser rifles and self targeting grenades. These gadgets kept the gameplay exciting and game me a ton of options, all of which felt viable to use in many situations. 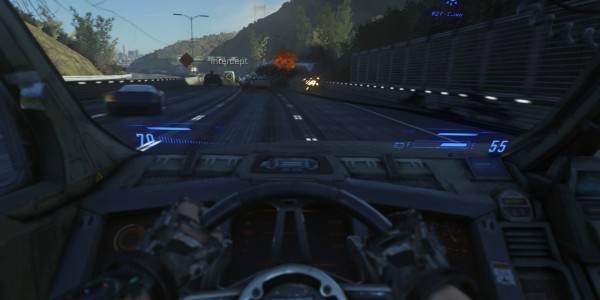 Some missions have you driving cars or piloting planes and surprisingly these sections felt fun and controlled well. There are a few stealth sections that got frustrating due to the on rails nature of the game at times. I wanted to go this way but that was the wrong way to go, even if it looked like a legitimate way to proceed.
In-between missions you are earn upgrade tokens which you can use to upgrade your health, armor, sprinting, etc. I never felt these upgrades made much of a difference and I ended up maxing my character by the end and feeling like the whole system was unnecessary. Not bad mind you, just not needed. 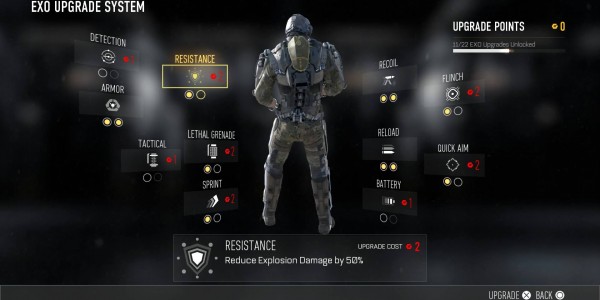 I haven’t really talked about the actual story of the campaign and that’s because it’s fairly standard and feels similar to past Call of Duty games. Bad guy wants to do bad stuff using advanced weapons and large armies of grunts. You travel around the globe and kill the grunts and stop the bad guy’s plans.
The actual story is that 40 years into the future a PMC has become huge, Atlas. You get a job for them and help fight terrorists, but (SPOILERS) it turns out Atlas may not be the good guys you thought they were. Kevin Spacey plays the boss of Atlas, Jonathan Irons. His performance is overall solid and there were some moments where the game's visuals and his acting combined to create a really compelling moment, like the scene at the UN. But sometimes his lines or his delivery felt off, its hard to put my finger on why. But I think Advanced Warfare is a better game with him in it. 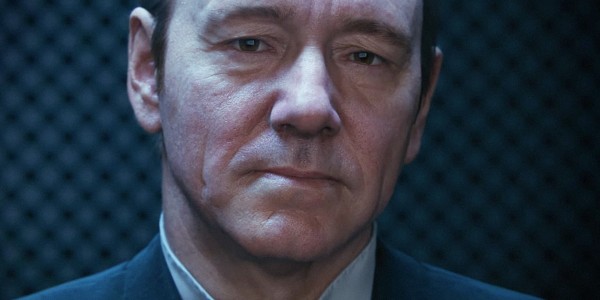 Visually the game looks fantastic. Some of the lighting in the game and faces look higher quality than any game I’ve played up to this point. The cutscenes in particular look incredible and the facial animations are highly detailed and looked great. The actual game itself looks better than any previous Call of Duty, but there was some pop in and flat looking textures that stood out. Also on the PS4 version of the game I had a few moments where the framerate dropped for a moment. It was never enough to ruin my experience, but it was noticeable considering the game runs at a super smooth 60 fps outside of those moments.
Also a huge shoutout to the audio team for creating one of best sounding games and certainly the best sounding Call of Duty. Guns all sound different and some of the guns sound brutal and shooting them, like the sonic blast shotgun, feels super visceral. Footsteps, jumping, explosions, all of it sounds fantastic. If you have a surround sound system you should probably give Advanced Warfare a shot at it. You will find some amazing results.
It might not be the smartest story ever told or the best written, but Advanced Warfare lets the player do things not many shooters are doing. Laser rifles, big name actors, double jumps and exciting set pieces make Advanced Warfare’s campaign an entertaining and action packed thrill ride all the way through. The missions feel unique and the combat is satisfying and when I was done I felt ready to jump into the online action of multiplayer.


For many the online competitive multiplayer of the Call of Duty series is why they play and in Advanced Warfare the multiplayer is great thanks to some smart design decisions and scaling back some aspects. 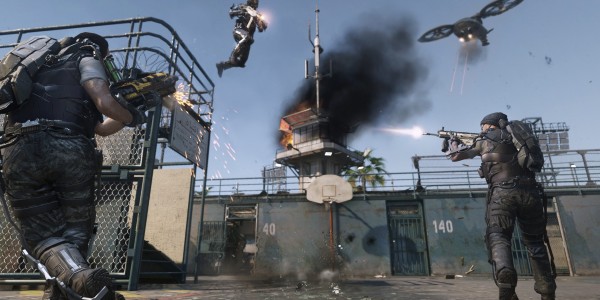 The biggest change to multiplayer is the addition of the Exosuit abilities. Being able to side dash into a room and then double jump over a wall ends up making levels feel more vertical and larger than ever before. Most of the levels in Advanced Warfare feel quite big and built to work well with your new movement options. Call of Duty has always had satisfying and smooth gunplay and now you can do all of that while double jumping or air dashing. It’s fun as hell.
While adding new movement options Advanced Warfare has scaled back other aspects. There are no pro perks, less weapons than before, no death streaks, and less destructive score streaks. By simplifying and streamlining some aspects of the multiplayer it allows you to focus on the new additions like Exo grenades or abilities.
Sledgehammer has brought back the “Pick 10” system from Black Ops 2 and made it better than before. Advanced Warfare has the “Pick 13” system, which allows you the same customization of your classes as before, but now you can remove or add extra score streaks. Are you someone who never gets lots of scorestreaks? Get rid of them and double up on perks or attachments. Love scorestreaks? Get rid of your secondary and take a fourth score streak. The flexibility of your custom classes is huge and even bigger thanks to a surprising addition to multiplayer. Loot drops. 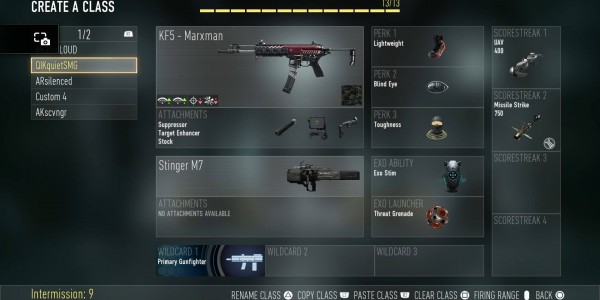 As you play online you will earn “Supply Drops” these are random and will give you new weapons, clothes, helmets, 2XP tokens and more. These items have different rarity and colors and you can trade in items you don’t want for XP. Some of the items, like rare weapons, have different stats and skins. I was excited every time I got a “Supply Drop” and even after losing a match I was happy to see what new loot I had.  It’s a simple loot system, but it adds enough of a wrinkle to the experience that I hope all future Call of Duty games copy it. 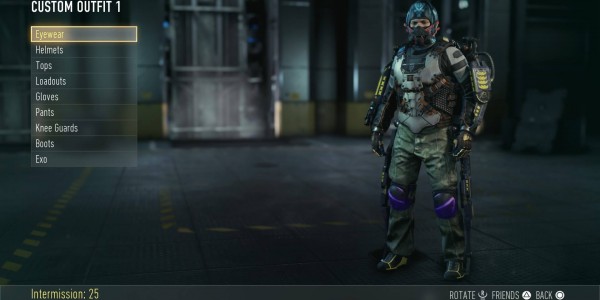 Speaking of future Call of Duty games, I don’t know how I’ll feel if the next game doesn’t have some of the same movement controls like Advanced Warfare. I don’t think I can go back to a Call of Duty without double jumps and dashing. It's that much of a game changer and within an hour or two it was second nature.
Advanced Warfare’s multiplayer feels different and new enough that I got lost playing hours of it and jumping around levels, collecting loot and unlocking new weapons. As someone who skipped over Ghosts out of boredom with the series, Advanced Warfare’s multiplayer has got me excited to play Call of Duty online again.


The final piece of the Call of Duty: Advanced Warfare package is an online co-op survival mode called Exo Survival. This mode pits one or up to four players against waves of enemies, which over time get harder and larger.
The simple addition of Exo abilities makes this mode more exciting and fun to play. Especially because enemies can also have exosuits, which can make some later waves difficult and chaotic, but in a good way. 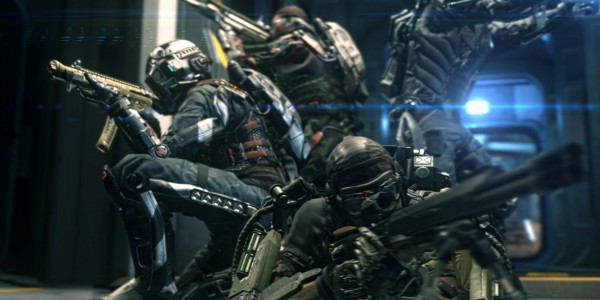 Exo Survival plays a lot like MW3’s survival mode. You have two “upgrade boxes.” One for weapons and one for your abilities and score streaks. You complete waves and unlock tokens which you use to unlock or upgrade abilities and weapons. Once you hit wave 25 you hit a second harder difficulty and keep going from there.
Exo Survival doesn’t do a lot of new stuff and it isn’t as complex as some of the zombie maps from later Call of Dutys. But it’s a testament to the amazingly well crafted controls and gameplay that even this basic setup can result in lots of fun. With a few friends I found hours disappeared as we fought side by side, jumping over roofs and fighting off waves of enemies. There is plenty to sink your teeth into with Exo Survival and with news of zombies making their way into Advanced Warfare via DLC, I’m interested to see what happens. Imagine zombies wearing exosuits, that could be crazy in a good way.
Exo survival isn't worth the price of admission alone, if this was all that was in the game we would have a problem. But alongside the meaty mulitplayer and exciting campaign, Exo Surivival feels like a well made and fun bonus that could evolve into more down the line, like zombies did in the Treyarch games. 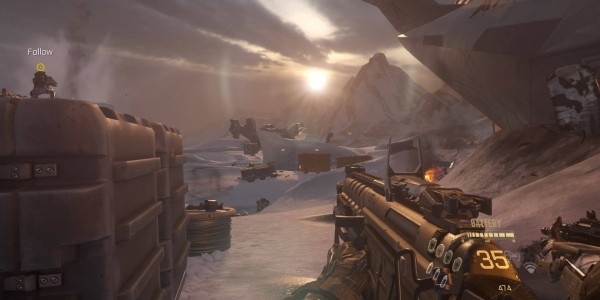 Call of Duty: Advanced Warfare is exactly what the franchise needed. It feels fresh and new while still playing like and feeling like a Call of Duty game. Sledgehammer deserves a lot of credit for creating a game that so perfectly balances what the series is good at with new ideas and mechanics. If you haven’t enjoyed the Call of Duty series then truth is that you probably won’t find a lot to love in Advanced Warfare. But if you have grown tired of the franchise or maybe feel a bit worried after Ghosts I think you will have a blast with this new game in the series.
And if you like Kevin Spacey, he’s in it too.
Rating
9.4
Pros