To some, the annual release of Call of Duty is a must-have experience.  Since Modern Warfare changed all the rules of the first-person shooter game in 2007, the Call of Duty franchise has soared onto the highest wings of any video game franchise, crushing sales numbers of the previous year's entry with every annual release.  The newest iteration is always on top of the Xbox Live activity charts each week for a good portion of the year as well. For me, what's been more interesting is watching the difference between these two titles.  Every other year, we get a Call of Duty title from either Infinity Ward or Treyarch. While the original Modern Warfare changed everything, Modern Warfare 2 sought to further franchise differentiation by almost removing the words “Call of Duty” from the box.  However, in 2010, Treyarch struck with a phenomenal game in their own right – Call of Duty: Black Ops. 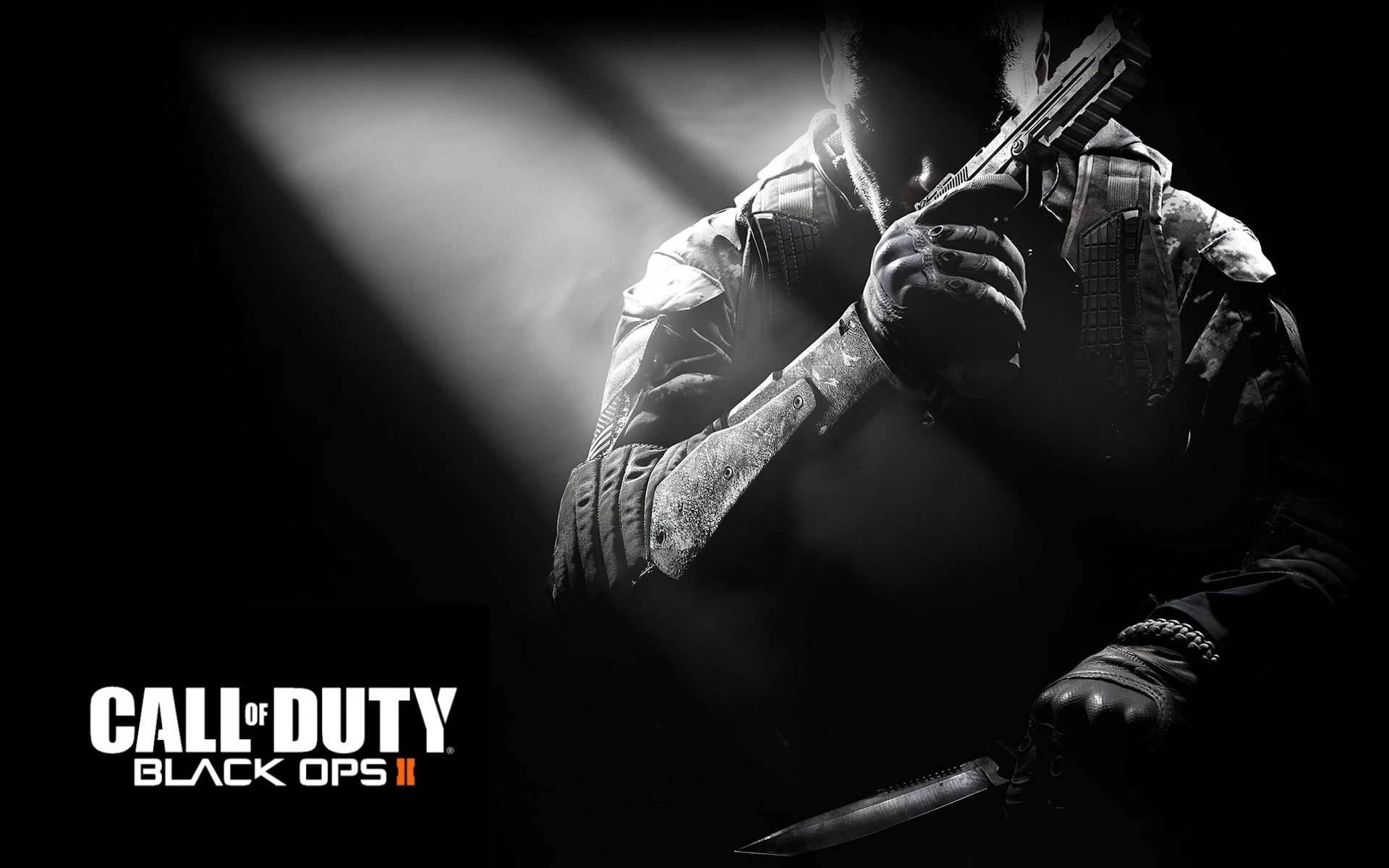 While I always enjoyed the stories of Soap and Captain Price from the Modern Warfare side of things, Black Ops introduced one of the best stories in a first-person shooter this generation.  The story of Alex Mason and Sgt. Frank Woods is quite a grand tale, spanning several decades.  No one had any idea what Treyarch would do for the sequel, but they decided to go in a direction that I never expected Call of Duty to hit, the future. The story of Black Ops 2 fascinated me long after it was over because it does tie into current events in an almost scary way, more so than last year's Modern Warfare 3. Black Ops 2 takes place in two different time periods.  There are four missions that deal with the background story of Alex Mason and Frank Woods, but the majority of the game takes place in the year 2025 as the player controls Mason's son, David.  While this isn't the first time we've seen a company take a stab at futuristic first-person shooter warfare, it is the most successful. Most of the great voice actors return to reprise their roles here, but I can't help but point out that while I love Michael Keaton, he can't really match Ed Harris' voiced character, Hudson. Every time he spoke it took me out of the experience. 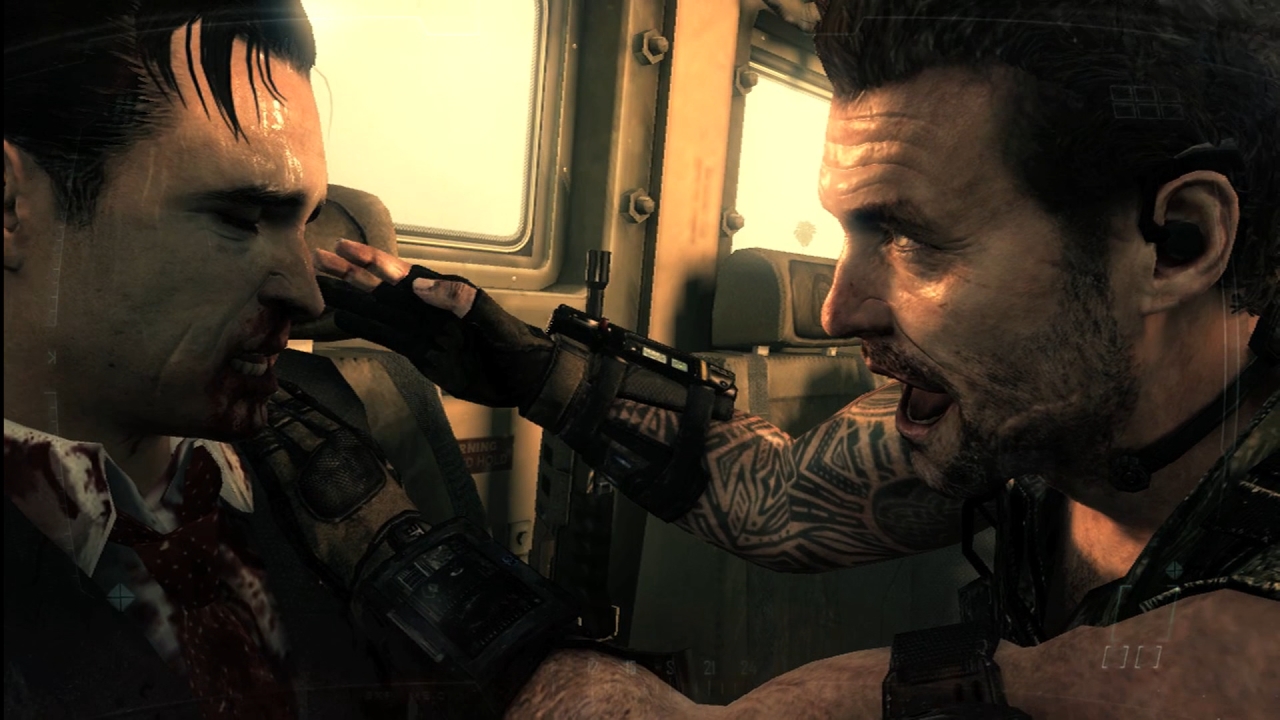 Although some of the voice actors are the same, some things have changed. One of the biggest changes with this year's edition is the amount of decision making you are given. At several points in the game, you are given the option to make a decision that will affect the final outcome of the game.  While in no way is this nearly as groundbreaking as Telltale's Walking Dead game, or the Mass Effect franchise, but it is a nice addition. Black Ops 2 also marks the first time that you are placed in the shoes of the game's antagonist on several occasions, adding an almost sympathetic view to the character at times. Futuristic weaponry is also fantastic. Throughout the campaign’s future levels there were a variety of guns that had different perks, making the whole experience a lot more thrilling.  Some guns are equipped with a motion sensor that can see through walls.  During the game's most fantastic level, which has you going through a war-torn Los Angles, you will get a sniper rifle that not only detects enemies through walls but allows you to shoot them through walls as well.


All of these new elements to a Call of Duty campaign make for one of the most memorable experiences thus far, however, this sequel's campaign isn't without its problems.  I played the game with the day-one patch, and yet I still encountered a number of alarming issues, quirks, and glitches within the game. For example, one mission calls for you to be on a futuristic gun turret firing at drones, and I accidentally hit the wrong button, ejecting myself from the turret and falling through the map. Rather than my character meeting his untimely death and allowing me to continue, the game just had me stuck there until I decided to back out and restart the mission. Nearly every one of the game's vehicle sequences aren't the greatest to control, but the worst has to be controlling the jet.  You know that sequence they showed off at E3 that looked fantastic?  It's not.  Sure, it seems cool when you first enter the jet, but once you use the thrusters and start dog-fighting, it all falls apart.  Thankfully, that sequence is also about ten minutes long, and is over relatively quick. 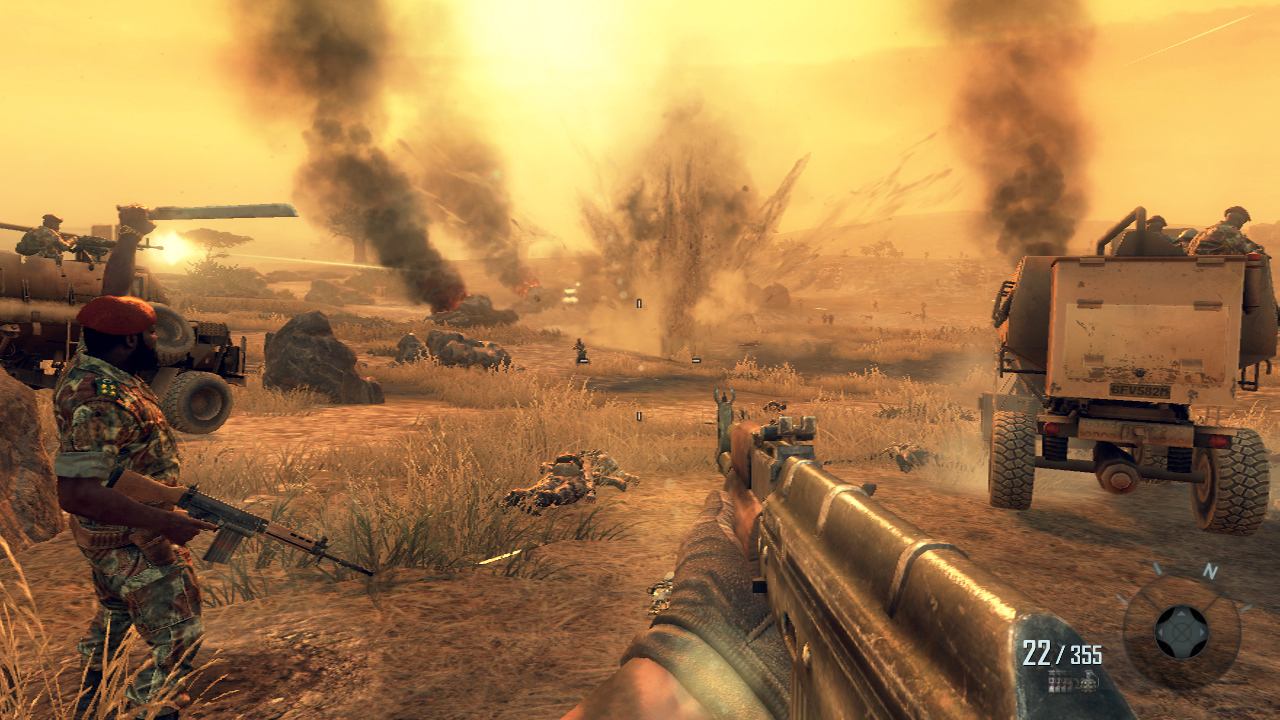 Then there's the enemy A.I., which this time is downright awful.  I played through the game on veteran (as I have with all of the Call of Duty's that I've played) and here the A.I. is just laughable. There were times when I would enter a room that my A.I. teammates had already entered, only to find one of them face to face with an enemy A.I. staring at each other.  A number of times I was able to walk directly up to an enemy A.I. with his body facing mine, and knife him without any sign of retaliation. Normally, I wouldn't complain about this if it was a sporadic problem, but I encountered this several times in every one of the campaigns levels. For a game released in 2012 this is inexcusable.

Finally, there is a new mode introduced as a companion to the single-player campaign. “Strike Force” offers three missions, that can be played or skipped during the campaign, which gives you a more tactical approach to the mission.  These missions take place on multiplayer maps and usually take between ten and twenty minutes, but the game gives you great control over an entire squad of soldiers and military equipment. Basically they took the idea from that Hudson mission from the original Black Ops and turned it into a bonus mode, rolled into the single-player campaign.  These missions I did enjoy, but on higher difficulties they can be a real pain. Now, despite these problems, I still had a blast playing through this campaign. At the end of the day, Black Ops 2's campaign will take you about eight hours, depending of your difficulty preference. Black Ops 2's veteran difficulty was also the easiest I've endured of this entire franchise.  While every previous entry had the typical choke point or two, I honestly can't say there was an instance where I got stuck on veteran this time around. But, of course, this is only one piece of the triple package offered in this year's outing. 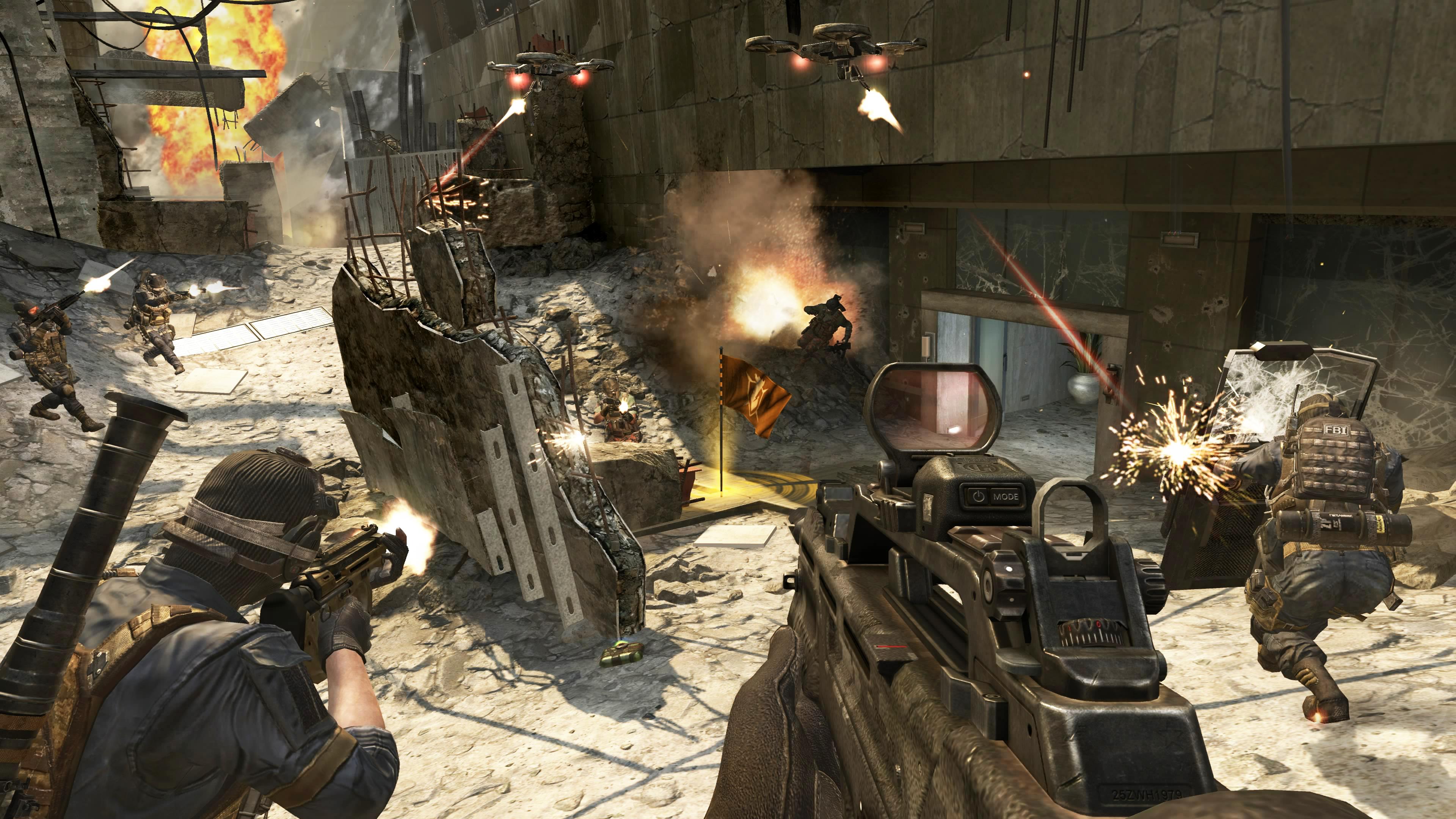 Multiplayer returns, retooled this time with a new “Pick 10” system.  The pick 10 system allows for you to pick ten different things to bring in with you to multiplayer.  These can be varied up between weapons and perks, and you will unlock “wildcards” which let you do various things like take two of a same set perk, or two of the same kind of gun, and so on.  This is a different and fresh approach to multiplayer and I have to say that it has paid off. If you want all three of your killstreaks to be UAVs, go for it. The possibilities with the new system seem endless, and allow for any player to fine-tune their personal preferences for multiplayer.

There are thirteen maps total, including Nuketown 2025, which is only available from various retailers as a pre-order bonus, and for the most part the maps seem balanced, however I can't help but point out that two of the maps take place on a boat or aircraft carrier and that's fine, but I wanted more of a variety.  The original Black Ops had a variety of different locals, only to be expanded with the added DLC map packs.  But perhaps my favorite multiplayer mode (introduced in Black Ops) has returned here, and that is Gun Game.  Gun Game is an addicting change of pace from the normal team death match or objective based modes.  You are pitted against eight other players, each starting with the lowest tier weapon in the game.  The object is that with every kill you will be rewarded with the next powerful weapon.  You start with a pistol and work your way to the final weapon, which once again is the tactical knife that can be shot.  If a person uses a knife kill on another player, it sets that player back one tier.  This mode is labeled under the “party mode” playlist, which also offers the other favorites from Black Ops: Sticks and Stones, and One in the Chamber.  Both those modes are also enjoyable, but I always got a kick out of Gun Game. 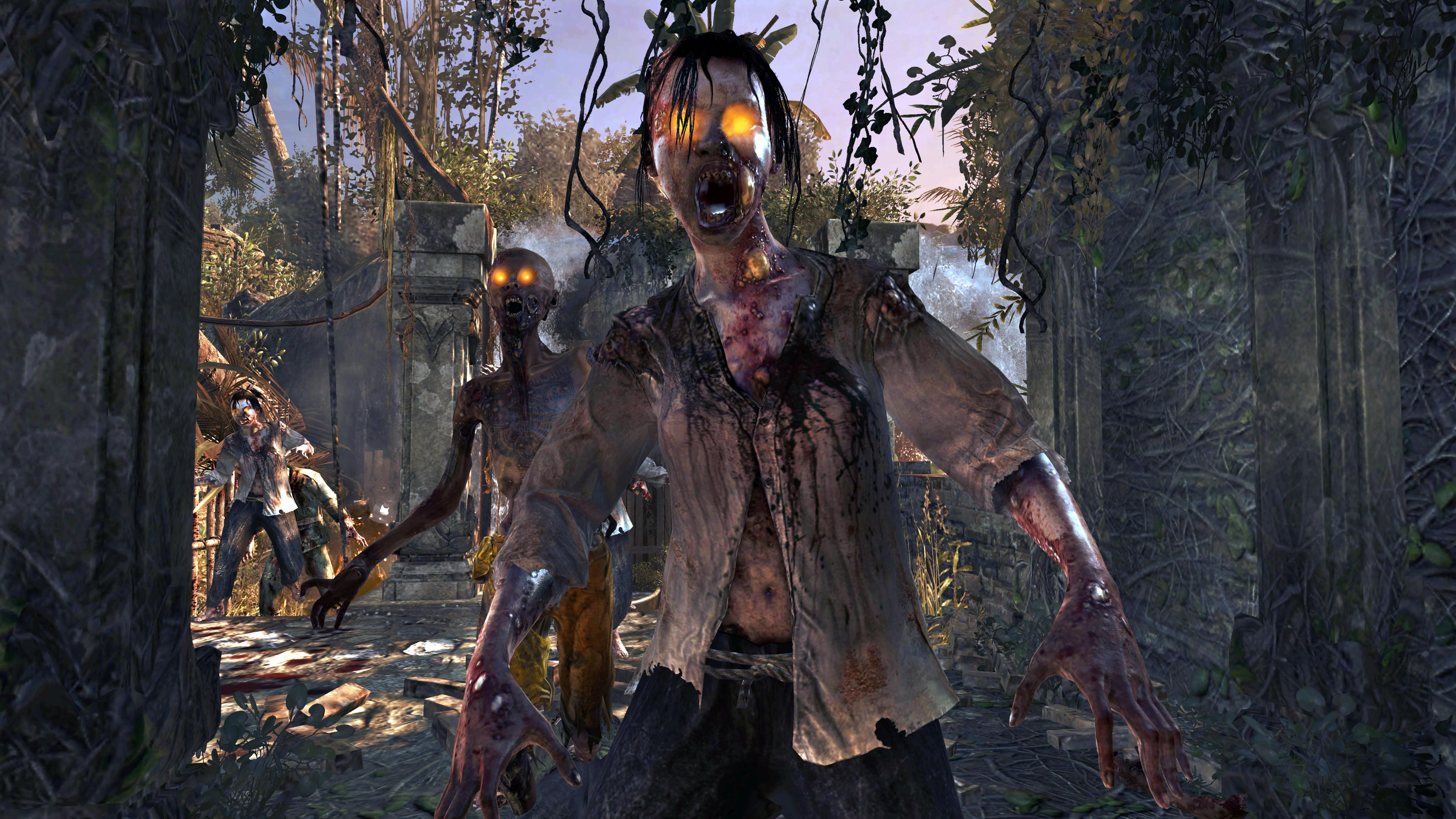 Wrapping up the already epic package is zombie mode, which has been upgraded from the last outing.  However, I have to be realistically honest here.  I've never really enjoyed zombie mode as much as a lot of people seem to.  While I'm a Call of Duty veteran difficulty player by heart, I've always felt that zombie mode teeters on the absurd difficulty level.  That hasn't changed here in Black Ops 2.  There is an ‘easy mode’ offered this time, but I didn't notice a change in difficulty at all. The biggest addition to zombies this time around is “TranZit”, which allows you to travel from location to location on a bus while defending yourself from zombie attacks along the way.  It's a great idea, I just wished there were more changes to the zombie mode, but sadly Treyarch decided to keep it safe this time around and not change up anything else about the mode.  While hardcore zombie fans will be pleased that the mode is relatively unchanged, I walked away from it once again disappointed.

So there you have it – another year, another Call of Duty.  For better or worse, Black Ops 2 further establishes with gamers that you can expect an annual quality title from the franchise.  Every time I think that this might be the year that Call of Duty fails, the newest game always surprises me somehow.  This year's campaign was fantastic, and in many ways a great action sequel worthy of being put on the same pedestal as a great Hollywood action movie sequel.  While I don't think that Black Ops 2 will win over any new fans to the franchise, it will please just about everyone else who is in love with Call of Duty.  Like it or not, the franchise is here to stay for quite a while.  I really look forward to seeing what direction Treyarch goes with their next title in this franchise.  Will we see a Black Ops 3?  Or are the stories of Mason and Woods finally over? Only time will tell...