By: | Comic Reviews | February 10, 2011
Moonstone Books Winter Special is a showcase of characters from the company that are represented in their own short stories within the issue. Captain Action and the A.C.T.I.O.N. agency are the uniting theme of the book for the most part and as such Captain Action leads off the issues with his tale.

This first story was very interesting to me considering I have never read anything with Captain Action and really had no idea what to expect. After all here's a man in tight leather and a funky hat, who knew he'd turn out more savvy than James Bond. The story begins with Captn' Action hanging off a ledge after being doubled crossed by a French Spy. He then backs up the story to explain that he was teamed with the beautiful blonde to obtain an orb for the occult before the Russians could. When they two weren't working on the missing they were working on each other which make for plenty of great one-liners and puns later in the story. 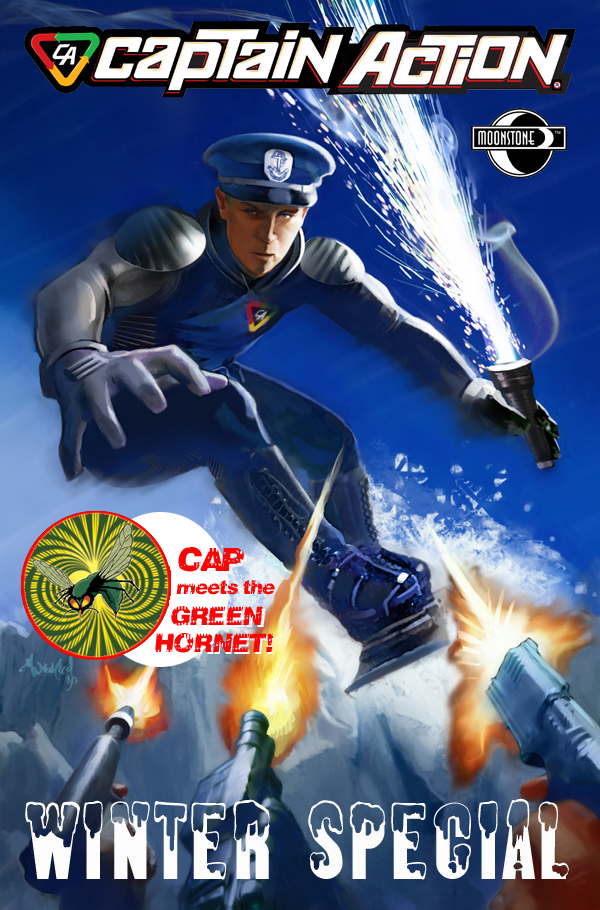 While the Captn' dangles from the ledge of a snow cliff at the mercy of the French spy and her Russian counterpart, he also has to deal with a pissed off Yeti trying to get the orb back as well. This leaves the Captn' in the proverbial "rock and hard spot" as he's forced to pick which foe to deal with. The plot is pretty basic and is kind of out of "Indiana Jones", but really it's the characters and the dialog that makes the story worthwhile. Captain Action is witty and has sharp dialog. Also his way with the ladies is commendable.

The second story follows Lady Action as she tries to enjoy a winter vacation with friends. A ski ninja spy team advances on the cabin her and all of her friends are staying at forcing her to cut the trip short. She flees the scene as to protect her friends and hits the mountain on her snowboard. The ski ninja's pursue her down the mountain as she pulls out her cell phone to call her handler at A.C.T.I.O.N. While dispatching the ninja's she remains on her cell phone.

The story is cute more than anything else since it's more of a scene from Lady Action's life, but it was still fun to read. Lady Action is more of a modern update to Captain Action in regards that she's young and up to date on the trends of the youth. When one of the ski ninja's shoots her cell phone she yells, "Now how am I supposed to Tweet this?" It was a little goofy, especially when the ninja's comment about how hardcore she is. It was a bit out of place, but all in good fun. One thing is for sure Lady Action lives up to the name.

There are two more stories in the winter issue and they're both worth a read. The special is a great introduction to some of Moonstone's characters. I know that I will be checking out Captain Action and Lady Action's adventures in the future. So if you're looking for a fun read with plenty of witty dialog and a lot of action as well then I recommend the Captain Action Winter Special.