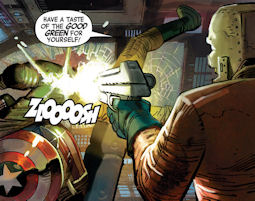 Having to follow Ed Brubaker’s historic Captain America run is one hell of an unenviable task. Someone had to, though. So Rick Remender steps up to the plate and... gets on base? This is definitely not a home run, but let’s say it’s a grounder that has him narrowly sliding into second base.

Flashbacks are a common staple of Captain America stories, but Remender kicks off this series with a refreshing spin on it. Rather than reaching back to World War II, the story reaches farther back to Steve Rogers’ childhood. Steve’s life prior to the Super Soldier Serum experiment is an untapped period of the character’s history. I really think Remender’s focus on it will become one of the more defining and interesting parts of his run just for being such a new idea.

On the other hand, he begins this by giving us a young Steve in an abusive household, characterizing his determination as coming from his mother’s determination to take a beating from his father without backing down. I don’t really know what to make of this. I can’t argue that it’s wrong, because I have no doubt this sort of thing was even more common back then than it is today. I don’t even know if this is a new idea or if it was previously established that Steve’s father was this kind of man. It is just an off-putting way of beginning things. Still, the more time I give it to settle in my mind the more it starts to feel like a good thing for the character. What’s the alternative? I don’t think Steve would benefit from coming from wonderful parents. Instead, coming from a more likely household for the time period better humanizes him.

We’re thrown back to the present in the middle of what turns out to be a sweet action scene between Captain America and some eco-terrorists. Now, the Green Skull isn’t a villain I would want to see again. Ever. But he works well as a one-off maniac here. You have to figure that every now and then Cap comes across some idiot terrorist that he puts down once and for good. The Green Skull definitely comes off as one of those guys. All in all, this makes for an exciting way to come out of the issue’s opening flashback and get us right into the thick of Captain America’s present day life.

Remender opens a worrying door in Steve’s relationship with Sharon Carter. The fact that he has this big development happen off-panel isn’t really the worst of it. Making this move at all is bad enough. I won’t state what it is outright, but you can probably guess. I have trouble seeing anything good coming from this decision, especially with the current climate in comics that seems to resent the very idea of any relationship progressing to this level. Chances are that events will transpire that cause either Steve or Sharon to back out, which is so predictable and often done that it’s not really a story even worth telling. Or Remender will bravely go through with it, and we wait for Marvel to inevitably undo it.

It’s at this point in the issue when the pacing goes to hell and we, almost literally, get taken on a bullet train through Dimension Z. The concept of Dimension Z has mainly been what the Marvel NOW! relaunch of Captain America has been hyped upon. That’s a real shame, because it’s the worst thing about the first issue. Things were going well and interestingly enough only to take this sudden left turn with monsters, Arnim Zola and a mad science landscape. It’s a jarring shift, and everything moves at such a rushed pace from then on that it doesn’t feel worth it. 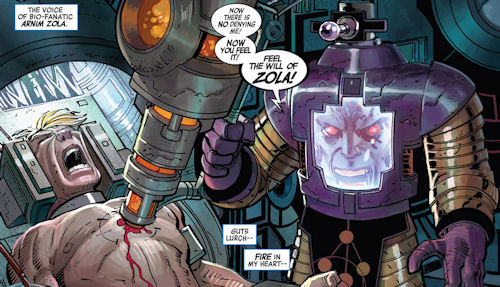 Then, there is the narration. Cap’s internal monologue carries through just about the entire issue, and I’m usually a fan of that kind of thing. This case is different. By the end of the issue, I’m annoyed and desperate for Cap to just shut the hell up. Rememder writes it in a very stream of consciousness fashion, so by the end it’s a steady string of sentence fragments and half-finished thoughts during all of the action. It does make sense, but it becomes kind of a chore to read through.

John Romita Jr. is an artist I’ve been down on in the past, especially for the quality of his work on Avengers. Thankfully, the quality here is much improved. This is more like the JRJr that earned all his fans. Personally, it’s still not to my own tastes, but I think it works well for the direction Remender is taking this series. He also does some really nice work with the action scenes as well. I’m on the fence about the slight redesign to Captain America’s costume, though. I get that the chinstrap is meant to give the mask more of a helmet appearance, but there’s something about it that is a bit goofy. On the other hand, I am glad to see Cap finally rid of those damn swashbuckler boots.

Remender has gone on record as saying that a heavy emphasis on crazy science fiction like Dimension Z is going to characterize his run, and it’s understandable that he would want to do something like this to differentiate from Brubaker’s run with the character. It’s a hell of a shadow to be under. But Captain America is not necessarily a character who goes hand-in-hand with this kind of this. Sure, there’s plenty of science fiction to his mythology, but that’s just a staple of the general Marvel Universe more than anything. Typically, the science fiction with Captain America has worked best when it is grounded and restrained. This isn’t Iron Man or the Fantastic Four we’re talking about. This is Captain America. To me, it’s like a writer deciding that their Daredevil run is going to be all about the supernatural. Yeah, there have been those elements in the past, but it’s never really been at the core of what the character is about. So in trying so hard to be different from Ed Brubaker’s take, Rick Remender has basically made this into a Captain America different from what I care to read.