So far Cap has appeared as a playable character in games like Marvel VS Capcom and Marvel Ultimate Alliance, but it took a blockbuster film to get him his own game and, while licensed games don’t have a good reputation in the game industry, Captain America: Super Soldier actually does things right.  First of all, the game doesn’t follow the plot of the movie, and rather offers up a stand-alone side story in which Cap infiltrates a secret Hydra base run by Emil Zola.  If you just like the character, or want to play an action game, you can still enjoy Super Soldier separately from the film.

The gameplay reflects what it might feel like if you were Captain America. You have a simple control scheme consisting of a Strike button, Grab, Dodge and Counter Attack buttons.  It gets a little button mashy at times as you hammer the Strike button, especially when fighting run-of-the-mill grunts, but this lets Captain America unleash all sorts of flashy attacks without the player needing to master a different combo for each technique.  As difficulty increases, players will need to rely more and more on precisely-timed counter attacks, grabs and dodges. 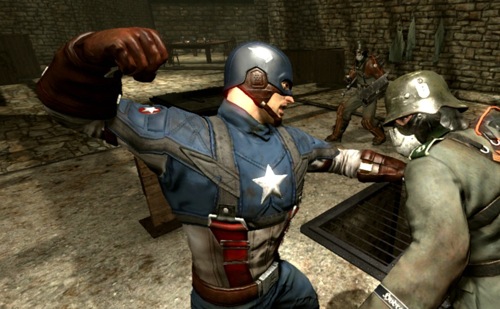 If you’ve played Batman Arkham Asylum, this should sound very familiar, but that’s not a bad thing.   Arkham Asylum had a terrific set-up for making players feel like Batman, and Super Soldier gives them the same taste of power as Captain America.  Super Soldier follows the Arkham formula very closely, but doesn’t feel quite as fluid.  It’s still a very good fighting system, but falls a little short of its inspiration. There are some balancing problems too; I found that even on hard level I could hammer through most encounters easily, and often forgot about my more advanced techniques.

It does add a few things like a Focus meter that charges faster if you use the fancier techniques.  The Focus meter lets Cap use special attacks that amount to one-hit-kills on most enemies, and turns the tide of battle against greater foes.  On the harder difficulty modes, using these Focus attacks is the only way to regain health, so this prompts gamers to avoid button mashing in order to charge the Focus meter.

Of course, Cap’s iconic shield is a major feature.  He’ll smack enemies with it when you hit the Strike button, but the trigger buttons can be used to throw it at far away enemies.  The left trigger causes time to slow down slightly, and an aim-assist reticule appears, so that you can aim precisely.  The right trigger is used for nailing multiple targets in a single throw.  As you level up, Cap will be able to target up to five enemies with one shot from his shield, and it’s quite fun using this technique to wipe out a group of cannon fodder, or to see the shield bouncing back and forth between a pair of tougher bad guys. 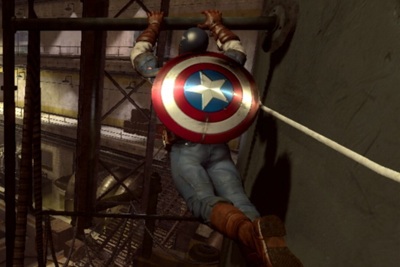 Above I mentioned Leveling up; as you make your way through the game you’ll gather Intel Points from finding Hydra documents and defeating foes.  When you have enough points, you’ll be able to upgrade one of Cap’s abilities.  Unfortunately there are only nine upgrades, and they’re organized into three tiers, meaning that you have to take all three first tier upgrades before going on to the next.  It’s a lackluster attempt to add in some RPG elements, but it does encourage players to explore Zola’s castle and look for hidden items.

And there are tons of collectible items.  For a spy organization, Hydra does a lousy job of hiding their intel.  Stuff is just lying around all over their hideout, and finding any of these hundreds of items will unlock concept art, character diaries, and bonus levels.  If you’re the sort of gamer who enjoys scouring levels and finding secrets, you’ll have a lot to keep you busy.

One form of unlockable item are Challenge levels.  Another idea obviously inspired by Arkham Asylum.  These challenge levels put you in high-combat situations, often with a special limitation (One won’t let Cap attack unless he find a special power-up first).  They’ll definitely keep you busy for a while after you’ve finished the main game.  This is a blessing, because the game is rather short, about seven hours long, depending on how eager you are to explore. 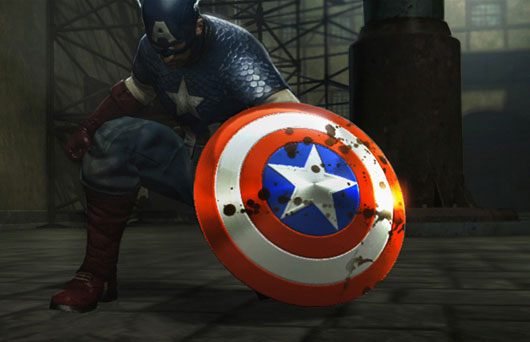 No Captain America story would be complete without a Giant Nazi Robot, and Super Soldier has one.  Unfortunately, it is the most anti-climactic end boss I’ve ever encountered in a game.  I’d fought my way through the game to encounter a two-hundred foot tall robot that I defeated using one attack.

Still, the hours leading up to that moment were filled with an ample amount of patriotic action, and lots fan service, complete with a couple of Cap's inspiration speeches.  While Captain America Super Soldier is essentially Arkham Asylum with Captain America, it is still a fairly good product, and the only game so far where Cap is the star.  Fans of the character will definitely enjoy this adventure, and action gamers looking for a change of scenery should pick it up as well.