By: | Movie News | August 30, 2011
Captain America: The First Avenger was certainly a success for Marvel Studios with a worldwide box-office gross of over $325 million. Seeing that America’s favorite super soldier is about to do battle in The Avengers and Marvel has already booked a release date for Thor 2, news of the sequel can't be far off.

We've known since February that a sequel was in the works, but apparently the script is still open to ideas. One of the film's co-writers, Christopher Markus, told the L.A. Times what his ideal sequel would include: MODOK, and he wants Peter Dinklage to play him. 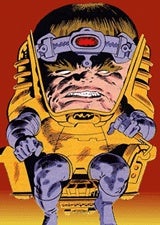 MODOK (Mental Organism Designed Only for Killing) made his first appearance in 1967 in Marvel’s Tales of Suspense and he turned into a recurring foe of Captain America. He started life as a technician, George Tarleton, and he was also the creator of the Cosmic Cube, which is set to be play an important role The Avengers as well as appearing in Thor and Captain America: The First Avenger.

Markus believe that Dinklage, best known as Tyrion Lannister in HBO's Game of Thrones, would be terrifying as the floating head.

The announcement of a possible villain from a screenwriter seems strange; perhaps Marvel has expressed doubts about MODOK being in the sequel and Markus wants to see if he can drum up support for his choice.

So, fans, would you get behind a Peter Dinklage as MODOK in "Captain America 2" campaign?