Cartoons That Would Make Great Comics

By: | Comic Features | October 10, 2011
There have been tons of comic book adaptations of all sorts of media, just as there have been adaptations of comics in different media. When there is more story to tell and a low budget method of putting it out is needed, comics to the rescue. However, no media, to my mind, makes a more effective transition than cartoons. I grew up reading comics based on The Simpsons and Ren & Stimpy. Comics allow a transition from cartoons that carry the same art and the same personality, offering fans more of what they love or a new perspective on their favorites. Of course, not everything is going to translate as well as others, but here are some cartoons that I genuinely think would make great comics.

The Pirates of Dark Water (1991)
As seen on: ABC (originally) and in syndictation
By: Hanna-Barbera
You know what sells? Nostalgia. For those that don't remember, The Pirates of Dark Water was an incredibly cool show with a criminally short run. The story was set on the planet Mer, a place covered in a dangerous substance known as Dark Water. Only the young Luke Skywalker look-alike, Ren, and his friends could collect the 13 Treasures of Rule to relieve the world of this threat. This show was dark and mature, but also full of fun and adventure. It didn't pander to kids, which is always nice to see, and instead invited them on an epic swashbuckling adventure to save the entire planet from a force of nature. Of course, as is often the case with quality television, the show was canceled prematurely and Ren never got all the treasures. How could there not be a comic series to finally finish out this incredible journey? Well, funny story. There was. The Pirates of Dark Water actually did get a comic series that ran from 1991-1992 and then quit after nine issues. Ten years later, kids that loved this show are adults with disposable income who still want to see how the story ends. Bring it back. 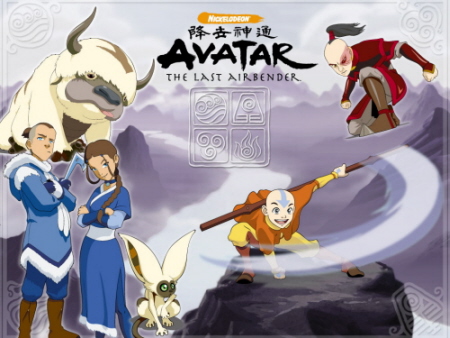 adventure. Once again, we have a young protagonist, Aang, whose ability to wield the powers of earth, air, water, and fire, make him the only candidate to save the world from the all-consuming Fire Nation. Told over the course of three seasons, this show had vibrant animation, well written characters, interesting mythology, a lot of humor, and some great action. Fortunately, viewers were able to follow the adventures of Aang and friends from beginning to end and a follow up is set to come out next year. However, by the time the follow up rolls around Aang has died (kind of how the whole Avatar thing works) and a great number of years has passed. I find it hard to believe nothing interesting happened during this time. Dark Horse already has a publishing deal for any new comics based on the series, so why don't they use it? From adventures after the series has ended to adventures of Avatars past or even future, the art and action translates brilliantly to the page and panel. The series loses very little in translation and there are so many more stories to be told from this inspired universe. 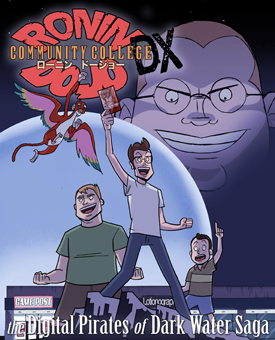 As seen on: YouTube
By: Ben Levin and Matt Burnett (For Tax Reasons)
Perhaps the most obscure entry on this list, Ronin Dojo Community College DX is actually just a really cool little series of short animations. The videos started in 2007 with "IM IN UR MANGER KILLING UR SAVIOR," a hilarious short about some nerds LARPing during a nativity scene, before eventually moving on to "The Digital Pirates of Dark Water," which featured the same characters in an ongoing story that dealt with an old rivalry and internet piracy. Tons of humor in this one, all of which is well done, mainly focusing on so much of the ridiculousness inherent in internet/nerd/popular culture. I very much get a Venture Bros. vibe from it (a series that would absolutely be on this list if I did not consider the acting so vital to its success), not only in its sense of humor, but maybe a little in the art as well. The only problem is For Tax Reasons has not made a new video in quite a while. I would absolutely love to see these characters go on new adventures in a comic with the same art and the same references to Red Dwarf and giant robots.

Adventure Time (2010-ongoing)
As seen on: Cartoon Network
By: Pendleton Ward (Frederator Studios)
I love Adventure Time. I've loved it since seeing the pilot that aired on Nick and when I heard that it was finally getting a full series, I was pretty stoked. I have yet to be disappointed with the series. Each episode is about the ludicrous adventures of a young human boy named Finn and

his best friend, a talking magical dog named Jake. They bomb around the Land of Ooo, hanging with vampire rocker chicks, saving the Candy Kingdom, and foiling the schemes of the Ice King. Each episode is only 11-12 minutes, but there is so much personality in each segment that I feel like only the most jaded will be unaffected by its charms. This could make a really cool comic book. The thing is, it wouldn't even have to follow Finn and Jake to be great. The Land of Ooo is vast and mysterious; the result of magic returning to the world after nuclear war wiped out society. Pen Ward has said he has no plans to specifically address this back story on the show. I think a comic book that explores some of the mysteries and histories of Ooo could be really compelling, without abandoning the fun and whimsy present in the show. Apparently, much of the production staff has a background in indie comics, so I'm having a hard time seeing how this is not something that should happen.

Regular Show (2010-ongoing)
As seen on: Cartoon Network
By: J. G. Quintel (Cartoon Network Studios)
Regular Show appeared on Cartoon Network very shortly after Adventure Time premiered and targeted the same audience. Within the programming block that these two shows inhabit, they seem to be the most successful, watching as other series come and go, and even shared a panel at this year's San Diego Comic-Con. Regular Show follows two slackers in their early twenties, Mordecai the blue jay and Rigby the raccoon, as they demonstrate remarkable ineptitude at their jobs, fight magical video games, time travel, and other shenanigans. I personally don't think it has quite as much personality and exuberance as Adventure Time, but it is usually silly, madcap, and humorous enough to be consistently entertaining. High Five Ghost may be the most brilliant character ever conceived. Still, I think the reason this show may seem more subdued is because of the limitations put on it for kids and younger adult viewers. If you've seen Qunitel's student films that the show is based on, one about two guys getting incredibly wasted and hallucinating while working the night shift at a convenience store, then you know there are some more adult ideas here that might not be allowed on television. An uncensored, indie-style comic book that let these insane characters go totally overboard could easily top the show for entertainment value. Honestly, I feel there would be more gained from a translation to comics than there would be lost. This good show could be a great comic.

There you have it, some of my picks for cartoons that could be really successful if they were adapted to comics. Have a favorite cartoon that you think would be great as a comic? Agree or disagree with any of my choices? Let me know in the comments. Stay tuned for the inevitable "Comics That Would Make Great Shows/Cartoons."