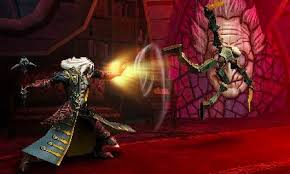 
Note that before I continue on with this review, there will be some heavy spoilers on this entire franchise, as the original Lords of Shadow has quite a shock ending, and one that divided the Castlevania community on this entire reboot. So, even though I know that this game is over two years old, there's always someone who will get upset with something being spoiled. So if you haven't yet played Lords of Shadow and are interested in doing so, what are you waiting for? Go play one of the best games of this console generation! But for the rest of this review, you've been warned. Gabriel Belmont's tale is one full of tragedy. With Lords of Shadow's shock ending, we saw the conflicted hero fall from grace, turning into the Dark Lord himself, Dracula. It was a decision that divided long time fans of the franchise. Those that write off this reboot franchise as simply, trash, while others fully embrace the new storyline. I'm one of the latter. But many questions also filled my head at the end of the original game, some of which were answered in the downloadable content, which gave way to just exactly how Gabriel becomes Dracula.


Mirror of Fate picks up roughly 25 years after the events of the previous game. After a quick prologue, which explains how Trevor Belmont is the son of Gabriel, something I was hung up on until this game came out, you start the game playing as everyone's favorite character: Simon Belmont. It's interesting to note that you play the events of this game almost backwards. Think of Mirror of Fate's storyline much like that of Pulp Fiction. Different storylines will intertwine at different times, and you might feel that something is a plot hole at first, only to find that it is explained later on from a different character's perspective. However, the shame is that unlike the previous game, Mirror of Fate's “surprise” ending is entirely predictable.


The basic plot progression in Mirror of Fate is a hampered mess at times. While I get the decision to do a Pulp Fiction style story here, it only hurts things in the end. The most disappointing thing about this game is the ending. A much better ending is hidden behind getting a 100% in the game, which isn't overly hard, but an honest poor design choice at this point. Many people who play this are going to scoff at things when that screen comes up at the end of the game, letting them know that there is a secret cutscene only available after collecting everything. This secret cutscene does help with the game's abrupt ending, but still leaves me with a few questions, hopefully questions that can be answered inLords of Shadow 2.

Fans of Symphony of the Night who are looking for a game of that caliber are going to immediately disappointed with Mirror of Fate. While it is easy to notice things like an experience meter, there are no RPG elements that made that game, and the six like it that followed, so beloved by fans. Instead, think of Mirror of Fate as a return to  Super Castlevania IV, another beloved title in the franchise. Combat and exploration mimic much of what that game offered, while allowed a very simple experience system. You gain experience here from items you collect and enemies you defeat, but it only unlocks more powerful moves. By the time I had completed the game, I was at an experience level of 15. There is a new game plus option, and also the ability to go back by Act to unlock the things that you've missed, or to restart the entire Adventure over again, retaining all of your abilities and unlocks, only having you hunt down the various upgrades to your weapon.


Combat is very reminiscent of Lords of Shadow, in a 2D world. This is a fantastic throwback to the early side-scrolling Castlevania games I grew up with as a child, while keeping the elements and lore introduced in Lords of Shadow. As Simon, you've gone to Dracula's castle to defeat the evil inside, to avenge whatever unknown fate has come to your father. In Act 2, the game shifts directions, having you play as Alucard, the son of Dracula. In the final act of the game, you will play as Trevor, which accounts for his tragic ending as well, giving the player just more of a sense of what is going on with these Belmonts.


The weapon of choice used in Mirror of Fate is still the combat cross. It is a weird design choice, considering at the end of the downloadable content offered in Lords of Shadow, we saw Gabriel shatter the combat cross with his bare hand. There was never any mention of other combat crosses in existence, but it isn't surprising that the Brotherhood of Light would have made more than one of them. The Y button allows you to make a powerful direct attack, while the X button allows for a massive area attack, one that is so massive, you really don't have to jump to attack flying enemies anymore. The B button is reserved for jumping, while the A button us used to perform the various throwing weapon attack. Each character has a different weapon attack.

Another complaint I had was a big inconsistency within the platforming. Towards the end of the final act, platforming turns from being pretty easy to manage to an almost nightmarish event. The whole section in the Clock Tower is a platforming mess, especially when you have to do what I can only describe as a “reverse” Donkey Kong. Basically, you are moving down and trying to avoid the object being thrown at you, rather than moving upward. Thankfully, this section of the game is the shortest, and will only lead to a few cheap deaths.


Surprisingly enough, Mirror of Fate offers quite a lot of cutscenes with full voicework. Robert Carlyle returns as the voice of Gabriel/Dracula, which he also reprises his role in the forthcoming conclusion, Lords of Shadow 2. These cutscenes help move the story along at a decent pace, but I still can't help but point out a few plot holes that I can only hope are answered within the finale later this year.


The main story took me roughly nine hours to complete, and when it was all said and done I had about 70% completion. It will take you upwards of twelve to fifteen hours to unlock everything that this game has to offer, even longer if played on a higher difficulty. Be warned, however, starting out on anything higher then easy is going to give you one rough experience. Without some of the harder hitting moves you unlock later, you will see death screen after death screen, especially considering that you aren't leveling up how much damage your attacks create.


While the story has a few plot holes and questionable moments, I'm able to put that aside because I am confident that anything I questioned here will be answered later this year with Lords of Shadow 2. I have to give Mercury Steam mad props for creating a new Castlevania game that isn't just another Metroidvania title, as I think after seven of those games in a row, it is time for a change. While Mirror of Fate will most likely continue to divide fans on this reboot series, especially with some of the changes to the fiction, it should not be missed. If you enjoyed the 2010 revival and you have a 3DS laying around, there is no reason you should pass up on Mirror of Fate. It doesn't reinvent everything about the series like Lords of Shadow did, but it does help bridge the gap between these two games. While I can't see the entire circle that Mercury Steam is trying to create here, and won't be able to until the release of the final title later this year, Mirror of Fate definitely has me pumped for that sequel. In summary, Castlevania: Lords of Shadow – Mirror of Fate is a decent follow up that bridges the gaps between stories, but it isn't the masterpiece that the previous game was.