By: Nicole D'Andria | Comic Reviews | December 3, 2011
I want to say this issue was purrfect – but that may be too bad a pun and no bad pun should be the opening to a review of something so wonderfully mortifying. After a bland first issue and a great second issue, Catwoman redeems herself with every intense moment and gorgeous panel she gives us in Catwoman #3.

After discovering her friend has been killed because she stole a mobster's trinkets, Catwoman is about to be tortured to death by said suave mobster while she goes through a huge meltdown. Having for the first time been the indirect cause of someone's death, Catwoman may take the ultimate plunge and kill Bone... unless Batman has anything to say about it. 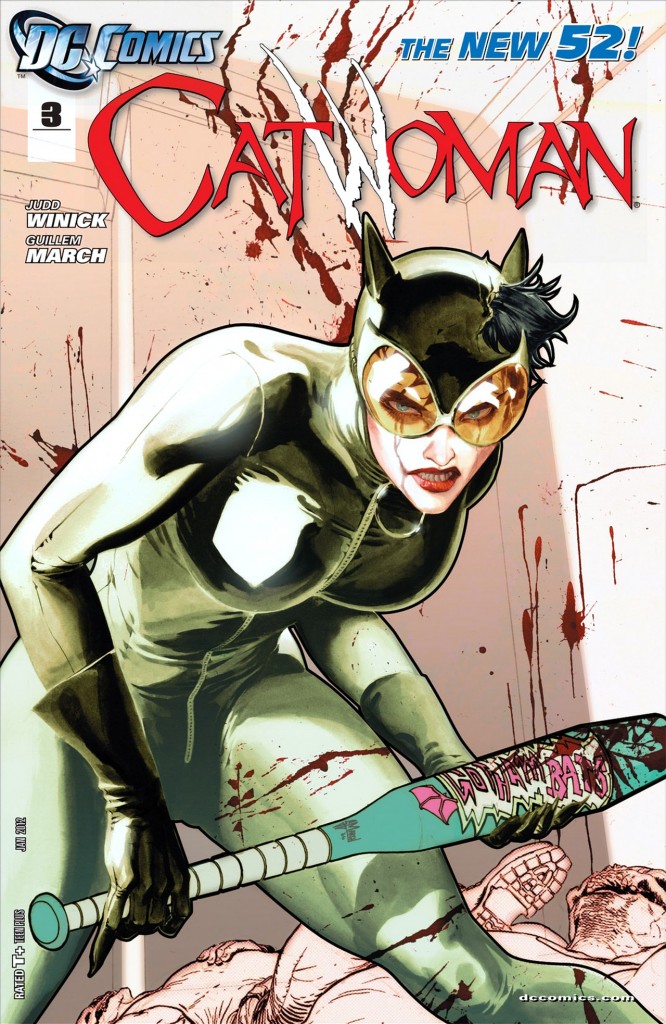 Writer Judd Winick has crafted a simple but great story. Killing off Selina's friend was a brilliant twist in the last issue, and Selina's meltdown because of it is very well done. She does not stop crying during this entire issue and is at her most ruthless, giving up the few morals she had left.

Her enemy, Bone, is a mixture of contrived and interesting. He has a long monologue while talking to Selena, who he is about to have his men torture. This monologue felt awkward and a flimsy excuse to explore the origins of the character in the fastest way possible. It does not hurt the pacing, but does stick out as a moment that does not belong. Also, Bone? The name hardly strikes fear into the heart of enemies and is one of the most bland villainous names in comics. But Bone, despite his simplistic nature, is interesting and without him the events in the comic would not even be taking place, so he is at least a wonderful plot devise that drives Selina to the brink of madness – if not over the brink.

Something else that did not feel appropriate was the narration. After an intense scene between Catwoman and Bone's thugs, where Catwoman acts mad, narration starts immediately afterwards. Catwoman's narration feels very monotone and takes away from the depressing mood. Her narration even unnecessarily talks about the history of the building Bone is in. But as quickly as the narration starts, another great moment between Catwoman and Bone begins (which happens after an unnecessary peek into a strip club – but I guess we can't get through one issue of Catwoman without some skin). It was also nice to see Batman appear again, with his clothes on this time!

The artwork is done by Guillem March and is great. The characters are extremely expressive. On one page Catwoman looks at her dead friend and her eyes alone tell the reader how much pain she is in and how lifeless her friend is. It is only an inappropriately cartoonish image the first time you see it, but the art slowly gets better and better. Towards the end, during the climax of Catwoman's meltdown, her face becomes downright ghoulish, adding to the horrific mood. Even Bone's design, which is your basic Black Mask in a suit look, was enjoyable because of the way his anger was perfectly portrayed on his face.

The art upgrades from "great" to "gorgeous" because of Tomeu Morey's colors, which were even more inventive and impressive than the already illustrious artwork. The scene with Catwoman's contorted face becomes fantastic when the normally dull bluish-grey atmosphere, which created a wonderfully unique setting that already added to the bleak mood, has dashes of red, and the white in between the panels has a huge splatter of blood. These unique tactics were astoundingly effective in making the reader feel the intensity of the scene.

Before, Catwoman was only a decent series at best, but this issue was amazing and one of the best issues ever produced during the "New 52" era of DC Comics. Saying it was purrfact in the beginning may be giving it too much credit; there are sour moments, like some awkward touches, faces, a misplaced monologue, and a villain who needs more creativity, but the combination of the story, artwork, and colors make this issue well worth a read.