In the world of comics you get the benefit of having cornucopia of characters. Some are fairly new but when dealing with Marvel and DC, some of them have been around for a very long time. As such they are subject to the hands and voices of different writers, editors and artists. Often times those said characters can take many different shapes and forms. Deathstroke: The Terminator, aka Slade Wilson, is one of those characters.

He was introduced in The New Teen Titans back in 1980. He showed up in the second issue to help his son Grant Wilson, aka the Ravager capture or kill the Titans. Thus he has been one of the Titans main antagonists ever since. After leaving the military he defied orders to rescue his friend Wintergreen, who had been sent on a suicide mission. Slade became a mercenary for hire but kept it a secret from his family until his son was kidnapped by a villain named The Jackal. Using his younger son Joseph as leverage, The Jackal demanded Slade to tell him the name of the person who hired him as an assassin. Slade refused because it's against his code of honor. Joesph's throat was slit destroying his vocal cords, leaving him a mute. Pissed that Slade let this happen to her son, Slade's wife, Adeline who has some military traing of her own, takes Slade's right eye. 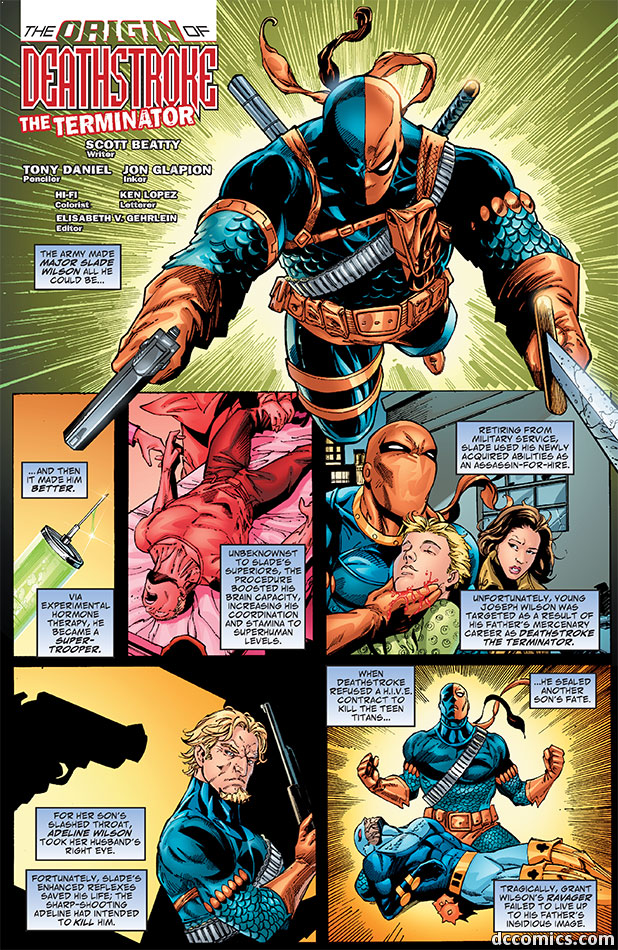 Part of a U.S military super soldier metahuman program that gave him enhanced abilities. Deathstroke now has heightened senses, ten times the normal man's strength, stamina, agility and reflexes. His reflexes are so insane that he took out Impulse's kneecaps with a shotgun and impaled the Flash, both while the Speedsters were running at super speed! Deathstroke can also use 90% of his brain at all times. That makes him a tactical genius. He can fight anyone anytime, anywhere and most likely knows everything about them and their powers, weakness and otherwise. When it comes to a physical fight he is hands down one of the greatest. He has even taken on The Batman one of comics most renowned fighters ever, to a deadlock. Not only that but in The Uncanny X-Men and The New Teen Titans, Deathstroke meets his equal when he goes head to head with the likes of Wolverine; the two fight to a near standstill. That's an awesome feet in itself. Like him or not Wolverine is and always has been one of biggest badasses in the Marvel U. In addition, Slade can also regenerate any damage fatal or otherwise revived from his blood as long as his brain's intact. He cannot regenerate body parts, like his missing right eye. When not wearing his mask he keeps it covered with an eye patch.

Slade Wilson is one of the deepest characters in the DCU. Be it his struggle with his children, his insane wife or his personal code. He is capable of inspiring others to do amazing things. He's a leader, he's a business man, he's the perfect assassin, but most of all he's a man that is to be feared. 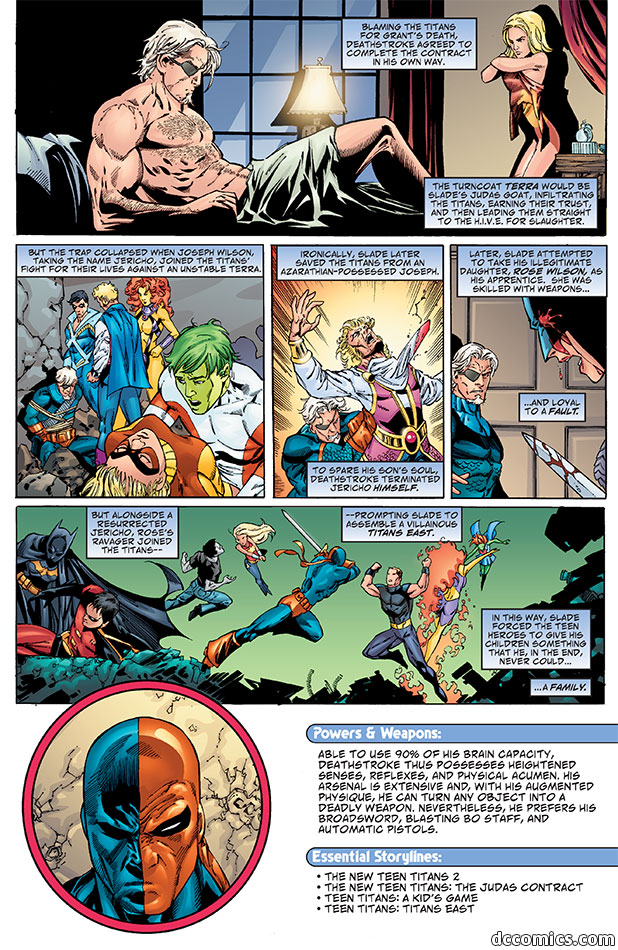