Here we go, issue two of Aspen’s magical romp Charismagic. Are we off to the races or does the book stutter and throw its momentum right into the ground? In the midst that is the Void, Hector finds showgirl Allie as some over sized roaches attack them both. They run and seek refuge; Allie demands to know what is going on. Hector lets her in on the bad news. In short, magic has betrayed them.

Back in a human-less Las Vegas, Hank is engaged in a conversation with his pet cat Sparkles. They chat as to what’s going on but neither of them really knows. Hank’s mind is blown due to the fact that his cat can talk. Sparkles breaks it to Hank that he has had the ability to speak since birth and humans aren’t too keen on new things or magical stuff, like talking cats. But everything seems to be lost on Hank as he just keeps asking what’s going on. (The damn cat said he doesn’t know, let it go.) Suddenly two magic, possessed creatures show up and Hank and Sparklers pull a quick disappearing act. Now safe they jump in a car and speed out of town. 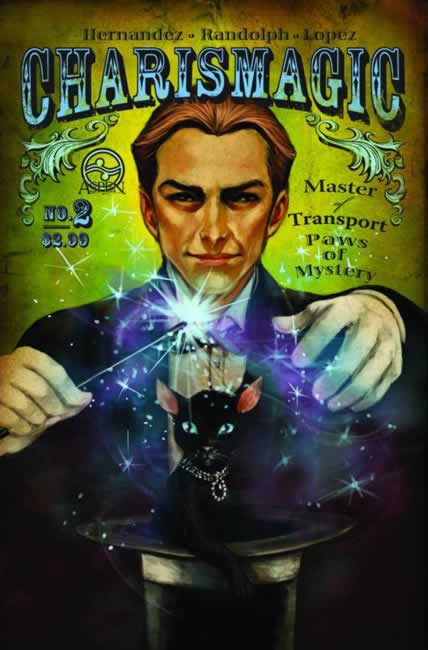 Now in the Fox Inn, Samsun enters the tavern that plays host to all sorts of mythical and magical types. He looks around and delivers a verbal gut-check to everyone in the room. This creates little to no response, so he lets loose and kills all of them. Forty miles outside of Sin City, Hank and Sparkles are still talking about what’s going on and not really giving each other a straight answer. In the middle of their banter they come across a glowing woman by the name of Sudana, a magical babe sent to aid Hank and Sparkles in this magical madness.

Charismagic #2 has a little problem: nothing really happens. It starts off with a cameo by Hector just so you remember who the hell he is. It also does that with Samsun, the bad guy, which happens in the middle of the issue and lastly with Sudana, the magic babe at the very end. The whole issue is just Hank and Sparklers chatting about two different things. Hank wants to know what’s happening and Sparkles is just going on about humans this, humans that. So, as the reader you get the gist; magic shit’s going down, these two need to stop playing twenty questions and start throwing fireballs or some shit. But then you go to their escape and they’re still just talking about the facts of their magic life. This really doesn’t make any sense; the reader has been pretty much shown everything that they are talking about, so why in hell are you making us read it?

Khary Randolph’s art work on the book is great as is expected, but it looks like even he had trouble in keeping this visually interesting. If all of this could have somehow been in the first issue then the experience might not have felt so drab. But on the positive side, with all of this out of the way and two of the main characters now united, Charismagic has only one place to go and that’s up.