Welcome to the end of the world, or what seems like it anyway especially when zombies are running amuck.

A small task force head by Eliot Kaine moves through the city looking for any supplies. The men in Eliot’s task force are: Kelvin “Preacher” Bailey; Jack “Frost” Richards (I see what you did there); Brock “The Tank” Carson; and Tai “Deuce” Cho. All of them showcase their own talents and weaknesses and so on. Together they are a destructive force with a dislike of the undead. As soon as the team enters the city they disperse small hordes of the undead while making their way to a grocery store. Once inside they gather up some canned goods and head off right smack dab into more zombies. As the team does what they do best, they show the skills, tactics and trust that have kept them alive.

And that’s it. That’s literally issue one of the Chosen & Forsaken. Eric Watkins lays foundation for a story that kicks off with a small introduction of the team and then it’s basically wall to wall zombies. The zombie head busting is cranked to eleven. No, really, that’s all these guys do in almost every damn panel. There are a few corny lines like the one Eliot says to Jack, “Cowboy up and strap on a pair”. What? Okay. The best part of that line was Jack’s face. So bad it’s good and yeah, it works. Carnage wise, there are heads getting blown off, guts flying everywhere and thanks to Dioscoro “Dong” Beniga Jr’s art it all looks pretty good. There are some inconsistencies in the characters design in the beginning but nevertheless you can see that there is some real talent here. 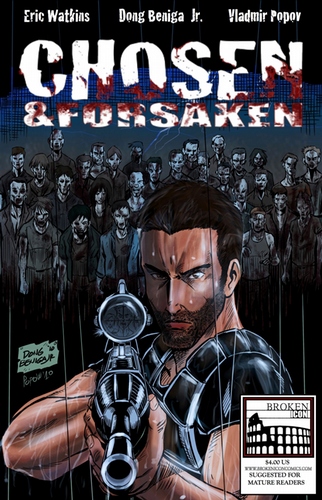 The best thing about this book is that it is simple, and simple in the best way. Sure you don’t get a lot of story and you really don’t know what the hell is going on but there’s that little something about it that makes you want to find out. But if you like zombies, better yet, if you like zombies getting their asses handed to them then you’re going to love this book because it’s pretty damn fun and has tons of potential.

* A solid book overall, might not be for everyone but does have a fan base and they will definitely enjoy.