I’ve seen It’s A Wonderful Life about 25 times in my estimation; at least once every year since I was five and sometimes multiple viewings, each taking place in the three weeks or so before Christmas. I’ve always loved it, and will always love it.

As I’m sure most are aware, Frank Capra’s 1946 masterpiece tells the tale of George Bailey (James Stewart), an ambitious idealist trapped in the confines of small town Bedford Falls.

Life has other things in store for him, however. There are often times when George finds himself in situations where if he’d simply left the room five seconds earlier his whole life would be radically different. George’s father runs the Bailey Building and Loan, the only institution not under control of the local curmudgeon Mr. Potter, who owns most of the town and charges most of the townspeople outrageous prices to rent his run-down shacks. 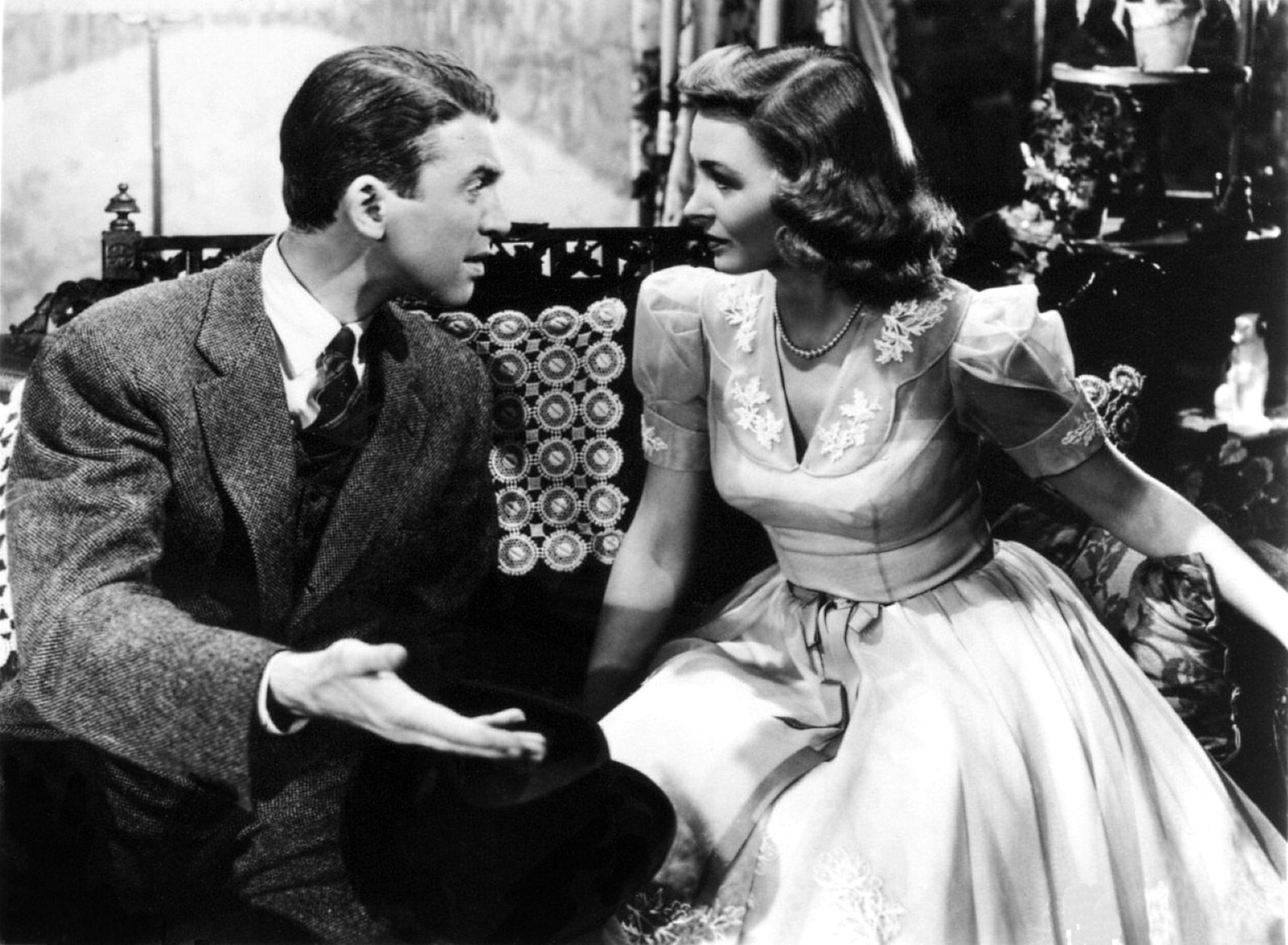 George resents the town that holds him back, but not its dwellers. When his father dies of a stroke, he gives up his dream of touring the world and going to college so he can run the institution, which he believes should exist “if for no other reason than people can have a place to go without crawling to Potter.”

Bailey’s life embodies John Lennon’s lyric: “Life is what happens to you while you’re busy making other plans.” He doesn’t ever really leave Bedford Falls, let alone visit the world and he doesn’t build bridges. He also gets married, something he told himself he’d never do. Though he finds solace and purpose in his wife Mary (Donna Reed), their four kids, and his friends the townspeople, his frustration consumes him when his Uncle Billy loses $8,000 (to give an idea of how much that was in the 1940s, Mr. Potter refers to a decent house valued at $5,000) and sets them both up to be sent to prison for a very long time. Pushed to his limit, George gets drunk at Martini’s, the local bar, and offers a last ditch prayer in despair, in one of my favorite scenes:

“Dear Father in Heaven, I’m not a praying man, but if you can help me, show me the way.” (As an aside, watch Jimmy Stewart deliver that little line of dialogue, and tell me with a straight face that he’s not one of the greatest actors ever.)

His friend notices. “Why do you drink so much? Go home, Mr. Bailey.” A surly man overhears, and recognizing George as the man that yelled at his wife in his grief, promptly clocks him in the face, busting his lip. 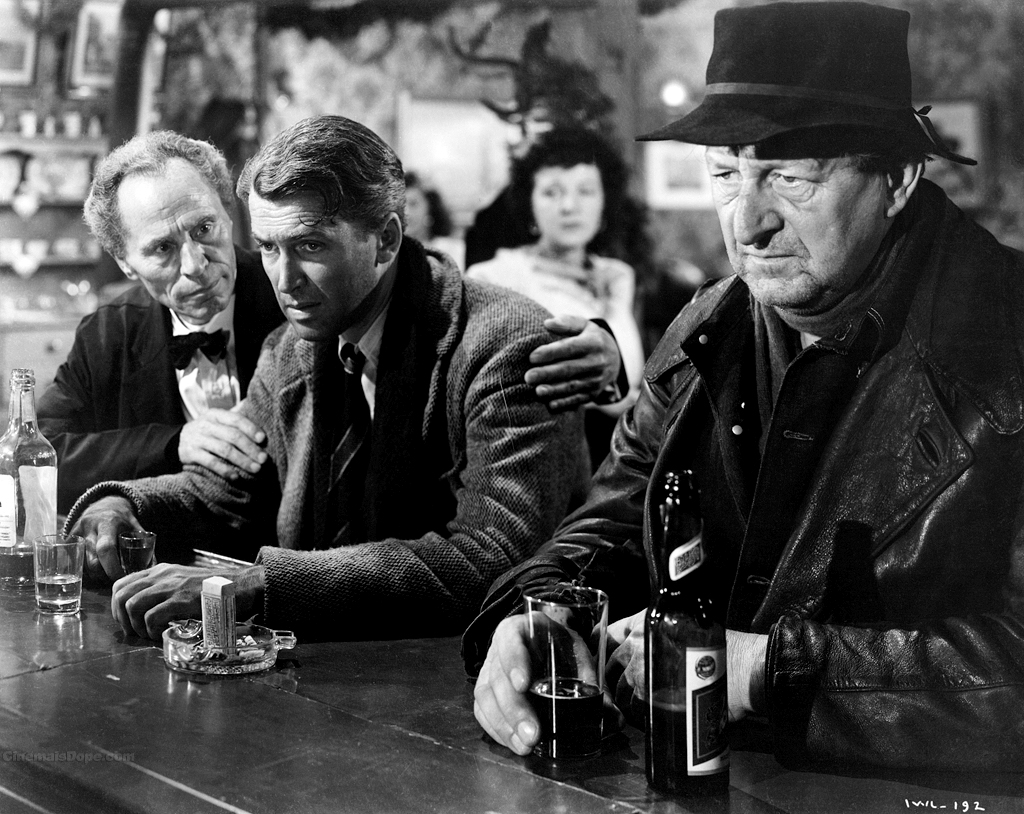 “That’s what I get for praying,” George mumbles.

By this time we’re about an hour into the film, and all of a sudden something divine happens. We’ve been introduced to a couple of heavenly beings in the opening scenes of the movie, but by now we’ve (or I, at least) generally have forgotten about Clarence Oddbody, A.S.2 (Henry Travers). As George contemplates suicide, second class angel Clarence is sent to prevent him from throwing away God’s greatest gift, and if successful will finally receive his wings.

“You look about like the kind of angel I’d get,” George says, still drunk.

Clarence’s idea is to take George through Bedford Falls to see what it would be like if he never existed. And so it happens. This alternate town resembles George’s own private hell. His mother doesn’t recognize him, his brother is dead, his uncle’s committed, the town -- now named Pottersville -- has been ravaged by gambling and crime, his kids don’t exist and Mary’s an old maid librarian.

“Strange, isn’t it?” Clarence muses. “Each man’s life touches so many other lives. When he isn’t around he leaves an awful hole, doesn’t he?” 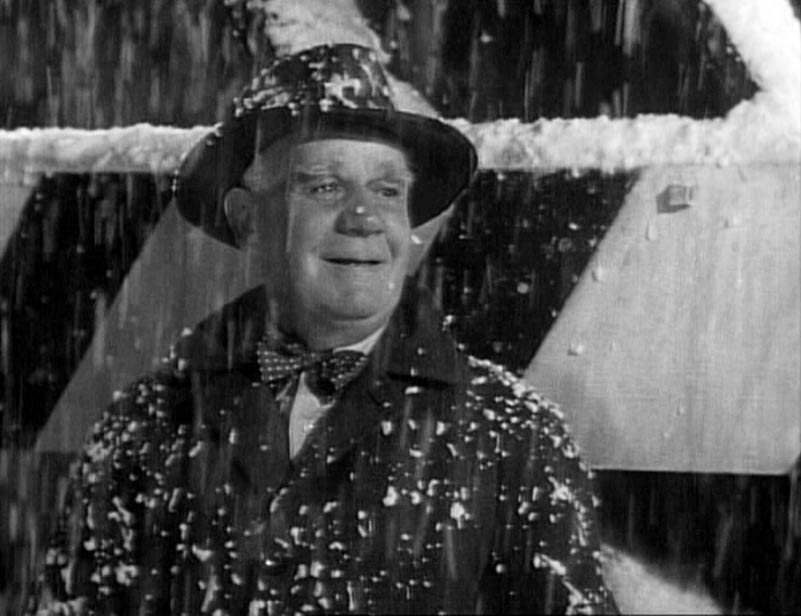 For those of you who live in a cave and haven’t seen this movie the 27 times it airs on TV during the holiday season, I’ll leave you to experience the climax and resolution for yourself, something that is quite magnificent the first time out (/sexual overtones).

Allow me to indulge in discussing technicalities for a bit. As a film I really see no flaws. There are wonderful examples of drama, romance, comedy, fantasy, and tragedy. There is not a single wasted moment, and the world and characters he and his actors create are so textured and life-like, they could be your neighbors. Combined with a tight script and invisible edits, I always -- despite my multiple viewings -- find myself pulled in and even forgetting that it’s in black and white. George Bailey is one of the greatest heroes in cinema, I believe, a man who epitomizes charity, selflessness and humility. I’m reminded of a scene where George, having already given his honeymoon fund to the community and under scrutiny from the bank examiner, gives a childhood friend some of his money so she can leave Bedford Falls and follow her dreams. He truly empathizes with her situation. He thinks nothing of his deeds and expects nothing in return. Our world could use a few more George Baileys.

As an admitted (recovering?) cynic, it seems odd even to me that I enjoy a movie as optimistic as It’s a Wonderful Life as much as I do. Perhaps it’s because it’s one of a few such films that doesn’t stray into sentimentality, though I also suspect it’s because George’s situation is easy to identify with. Life often does screw with our plans. Every time I see the film though it reminds me just what a special gift we’ve been given, regardless of where it came from. I feel it important to note that though the film does center around God and angels, its messages are universal. Religious or not, deist or atheist, secret believer or scientologist, Clarence’s final words of advice apply not just to George, but to us all, in these times of hardship:

No man is a failure who has friends.

Before my briefly revived idealism perishes, may I just remind all of you this holiday season that there is at least one person who is grateful for your existence. Even if we’ve never met, it’s important to me to have readers for my words when I’m inclined to write them. For allowing me that I thank you, and as a token of my appreciation invite you to watch or revisit this classic of cinema. Hopefully you’ll receive something from it as I feel I have.