Cinema Physique: A Film Buff on Being Film Buff

is superficial. When it comes to landing roles it’s the survival of the prettiest. Given often enters the realm of fantasy, most folks, including the aesthetically challenged, have found it quite nice to see the beautiful people placed in dangerous to ironic situations.

Yet somehow, my fellow writers on the Player Affinity Staff have come to accuse me of looksism, as if I am not merely a product of this beauty-based society in which I was raised! Well to heck with them all! I embrace superficiality, at least to the last keystroke of this article.

Wrapped in my swooning arms is the hulking muscular body of one Tom Hardy. No, not Tom Hardy as Eames from Inception when he was all skinny and normal (sickly) looking, and not him with his head shaved and the icky '70s mustache in Bronson. I’m talking about Tom Hardy all bulked up as Tommy Riordan in Warrior. That’s a real man! Hardy, in my humble opinion, is the best thing about Warrior. He carries the film on the lovely curvature of his shoulders as many an actor has been asked to do in the age of top billing stars over substance and stories. Some guys have a bit more brawn to carry the load and I intend to celebrate said bulk in Player Affinity style. You’re welcome.

Le Sigh: skinny guys are a tragedy. I know you can’t help it. It’s a man’s nature to have a fast metabolism. No matter how much you eat you can’t put on an ounce and when you need to drop weight it’s as simple as giving up soda. But skinny guys who try to be buff make me angry! These are the types that try their hardest at the gym. Bright eyed with good intentions they head out to work on their fitness with PowerBar in one hand and ankle weights in place. After months of dedication these guys are still 150 lbs. soaking wet. All they’ve gained are visible veins on their weak chicken arms and a six pack only slightly more visible than their bulging rib cage.

Andrew Garfield is the perfect example. Skinny Spider-Man, I never thought I’d see the day. His spine bulges out of his neck for goodness sakes and he is supposed to be a superhero. He’s joined among the likes of Leonardo DiCaprio, who helps himself look more intimidating by growing beards, glaring, and wearing long-sleeve shirts. The only thing worse than being skinny buff, is being skinny, buff and pale. Thankfully Hollywood hasn’t forced that character on us yet.

No, that is not a typo. Smedium is a shirt size for guys who aren’t buff enough to bulge out of their button downs so they buy a top a size too tight to give the illusion of straining bulk. In cinema smedium buff is for the average guys out there. Yes they are hot but when it comes to buffness they run in the middle of the pack and never really stand out. It’s not a bad place to be in, it just doesn’t impress me. Take Hugh Jackman, Ryan Gosling or Ryan Reynolds as the quintessential smediums. These are not bad looking guys; they could probably hold their own in a fight and not come home with too many bruises and cuts but in the scheme of things they just aren’t that big. I get tired of hearing about this or that actor putting on 20 or 40 lbs. of muscle for a role. Unless you put on more than 65 lbs. don’t call a press conference. You’re like a B-, so close to good yet somehow totally defeating.

This is my dream guy. Meatheads are hot and all, but more to show off than bring home to Papa. A guy with a little width around the middle is more approachable than a perfectly chiseled Adonis. These guys probably didn’t get their brawn from 24 Hour Fitness; they more than likely worked out in lockup or trained on the football field. There is something undeniably imperfect about their figures and yet guys with this build always carry it with finesse.

Ving Rhames, Vin Diesel, Quinton Rampage Jackson (The A-Team) and Michael Clark Duncan fit the bill. These guys lean back at the table and can throw back a whole chicken and probably finish up with a six pack. They’re lovable, huggable and fully capable of kicking the crap out of your ex boyfriends. The ground shakes a bit when they walk and their laughter sounds like thunder but in the end these guys are just big teddy bears who are misunderstood.

They don’t make them like this anymore. Being 'roid rage buff is perfectly epitomized in the stars of '70s and '80s action movies such as Arnold Schwarzenegger and Sylvester Stallone. Not only are these guys ripped, they cover themselves in oil, wear tight pants and can flex their butt muscles. I was not surprised when, during his first campaign for Governor of California, Schwarzenegger had some “artistic” modeling photos leaked showing him holding a whip between his taunt buttocks. His opponents obviously meant to embarrass him when all they did was confirm his virility and get my vote! Schwarzenegger famously gave up steroids and saved his testicles early in his acting career, but fellow action hero Sylvester Stallone continues to abuse Human Growth Hormone which he openly hails as safe and effective. 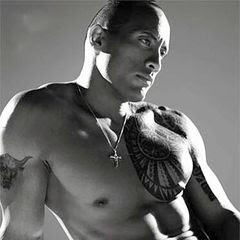 The biggest and baddest of all the buff guys is the tank buff guy. This guy is built like a cinderblock and looks like he could scare a train off the tracks. Unlike our 'roid rage buff guys, these dudes swear they are all natural. You’re more likely to find them in a boxing ring or wrestling match than on the big screen, but occasionally you’ll find them in both.

Enter Dwayne "The Rock" Johnson, the wrestler-turned-action-star-turned-children’s-movie-huckster-turned-action-star-again. His neck is the size of a Victoria's Secret model's waist, his chin looks like it can do pushups, and if I bounced a quarter off his behind I’d have duck for cover. Tom Hardy was similarly ripped for his latest role as an MMA fighter and Bane, a juiced-up foil to the iconic Dark Knight. As fighter Tommy Riordan, he put on enough mass to give his back muscles back muscles. A bulbous arc of meat formed tightly across his shoulders given the appearance of a new neck muscle.

People might try to make you ashamed of your desire to ogle the hottest of the hot on or off screen. Don’t be ashamed! Tinseltown has made billions, or perhaps trillions by now, exploiting the looks of the most beautiful men and women of the age. And when I dip into fantasy I envision a man who can lift me up and run me out of a burning building, pull me out from under the two-ton weight of a vehicle, or beat the crap out of a great white shark. I don’t want to marry some dork that would sprain his ankle running from a raging bull or turn yellow at the thought of defending my honor against a bigger man in a bar fight. If you want to impress women like me, put down the juice box, pick up a dumbbell, and take that girl you're pining for out to see Warrior this Friday.