Codebreakers delivers a solid government spy thriller that appeals to your nerdy intellect and your smarter-than-you-complex, all in one story.

Boom! Studio's seems to have the uncanny ability to make a comic book feel like something more.  This comic could have easily been a pilot episode of a new TV series or even the newest thriller hitting theaters.  That's how good this comic is and how well it reads.  Carey Malloy, the writer, crafts an intelligent, fast paced story that leaves you waiting for issue two. The characters in the story are just that, characters, each with their own unique voice and mannerisms that define them throughout each act.  The story follows Stanley Grouse, the youngest cryptanalyst in F.B.I. history.  Stan represents the future of code breaking, and strives to be the best.  He's apart of the alpha team, headed up by Donald Foster.  Foster is the experienced leader, the best around and perhaps a little hardened from his experiences.  Lindsay Abbott is smart and beautiful, she sees the code in people's patterns and habits.   Closing out the team is Malcolm Whiteweather, the oldest member of the team.  Malcolm represents the early days of code breaking and rounds out the personalities on the team. 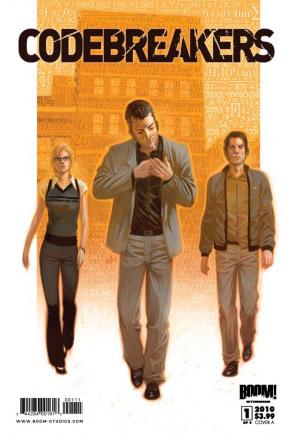 One day Stan is at work, then the next, he's not.  He cracks a code he believes is from Foster, then jumps off a bridge.  The team is obviously taken back by this, but none more than Foster.  He looks for code in chaos and feels that Stan isn't dead, but abducted.  Foster and his team may work for the F.B.I. but they're not trained agents… They're code breakers. Stan may have just cracked a code that landed him in trouble, it becomes clear that the Feds are not going to look for Stan. Foster takes it upon himself to find him.  Contrary to his plans, his team mates are not about to let him go it alone.

Scott Godlewski, the artist, draws as if there was a camera in his hand.  The depth, proportions, shadowing, all of them are nearly flawless. In the beginning sequence, Stan is running late for work.  With each panel, Stan is in motion as the art guides your eye across the page.  Something that can easily distract the reader is inconsistency in characters. In superhero books this is mostly forgivable because of their costumes.  You can always tell Batman apart from everyone else in the book, no matter how poorly he's drawn.  In non-superhero books, the characters have to look the same from panel to panel and in different lighting. You cannot afford for the reader to get confused or forget which character is which. Scott's art in Codebreakers should be the bible for other artist to follow.  Each character is recognizable scene to scene regardless of their clothing or placement in the room.

There's is one minor annoyance about the book.... It's a mini-series.  A book with this strong of a beginning almost demands an on-going title. That's a lot to say about the first issue, but that's how good the issue is.