The best way to summarize Cold Space is to say that it’s about Samuel L. Jackson playing a Riddick-Pitch-Black-type character that crash-lands in a western space town. Really, there is nothing else to the story besides a lot of Samuel L. Jackson-esc dialog and a whole lot of ego-stroking. Usually, Boom! Studios are able to produce comics that feel like movies, but that’s not the case here.

Samuel Jackson is Mulberry… Or maybe it’s vice versa. Regardless, he’s a wanted criminal with a list of several mediocre crimes in order to try and give him an interesting back story. He’s running from a bounty hunter by the name of Johnson. They board his ship and fall for his trick of placing his armor and boots in the driver’s seat and getting the jump on them from behind. At this point, Johnson and his crew throw their guns down and allow Mulberry to easily disarm them. He’s outnumbered and out-gunned but they still submit to him because “he’s fast.” It’s ridiculous, but not done yet.

After tying up the bounty hunters and ejecting them from the ship, Mulberry returns to find a bomb sitting in the cock pit. Oh wait, so the plan was to blow up his ship and never find his body so that they could never claim the bounty? Makes a lot of sense, right? The plan fails and Mulberry crash-lands on a planet that is attempting to recreate the Wild West with space guns and crime, and failing at it. 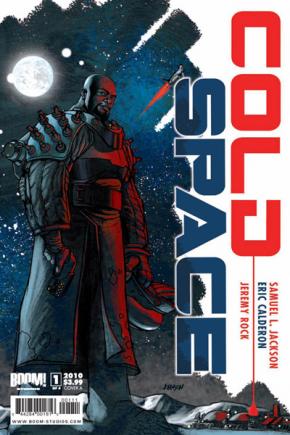 Jackson and Eric Calderon (Zombie Tales) make no attempt in making Mulberry a character, and really if this wasn’t a desperate attempt at getting Hollywood to notice the book, they probably would have just called the character Sam Jackson. The story/world/characters are all two dimensional and forgettable. Literally, it’s just Riddick meets any western movie ever.

Jeremy Rock (Zombie Tales) pencils are lacking any real detail with the exception of Mulberry. The results make Mulberry stand out and look out of place with the rest of the book. The other characters mostly look the same and since they all have the same bad dialog there’s really no difference. The only thing that makes a character in the book even remotely stand out is if they have weird hair or a facial scar of some sort. Juan Manuel Tumburus works with what he has when it comes to the colors, but the entire book is comprised of just three: Black, Metallic Grey and Beige. The coloring leaves the book looking flat and has nothing to catch the eye.

If you are a big Sam Jackson fan and have been dying to see him in a comic book because you can’t stand his voice or something… Then this book is for you! If you’re looking for a Wild West space story that’s been done a hundred times already… This book is for you. If you are looking for a story that tries to add its own unique twist to a genre that’s never been of any quality… Not for you. If you are looking for Sam Jackson to show that he’s not a one trick pony who acts the same in every movie post Pulp Fiction… Then keep waiting. All this book does is hand wave at Hollywood and say, “Pick me, pick me to be made into a movie!”

Perhaps Mulberry could take the Plutonian in a fight… that would be a “killer” cross-over! Follow Dustin for more puns on Twitter and ask him “who would win in a fight” questions on FormSpring.