Mulberry is back! After the crazy events of the first issue Samuel L. Jackson... Sorry, Mulberry, returns for more space hi-jinx! Mulberry accepts employment with one of the local gang leaders. This is after he's beaten the crap out of half of the gang he employs. To prove his skill to the gang, he exchanges flirtatious dialog with a prostitute. The dialog concludes with the prostitute throwing a deck of playing cards in the air and shooting them to make a full house. This is only made apparent in the ending sequence of the page. The panels leading up to the reveal consist of Mulberry's profile looking at something. The reader is to assume that shooting is taking place somewhere within the blank stares.

If Mulberry isn't ridiculous enough for you a new character is introduced. Patience is a... man? More likely a woman due to the fact that her face is hidden and Mulberry is God's gift to women. Patience is also employed by the same gang leader, making Mulberry and her/him co-workers. The two make awkward glances at each other, which are used to imply that without knowing each other, they don't like each other. 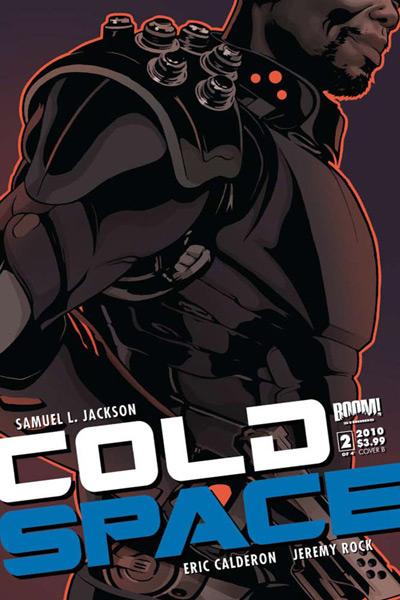 After being given a ton of money for nothing, Mulberry starts tracking down the crew that discovered him and his ship. The crew has his stolen guns and he wants them back. Either Mulberry is fed information from a junkie on the crew or he's able to bullshit important details about people he's never meet before. Mulberry busts out a dossier of information on the gang. By breaking the team down to their lowest common denominator he somehow wins them over to his side. He puts them to work on the guns and his busted up ship, then goes looking for trouble.

Mulberry continues to be one-dimensional and useless. He's either a super-genius or he's written with the knowledge base of the writers, which gives him information he otherwise wouldn't know. It's the latter of the two. Sam Jackson and Eric Calderon make no attempt to craft an original or interesting Sci-Fi world. Instead they steal a general outline of other Sci-Fi worlds and throw Riddick... sorry, Mulberry into the world.

The best worst scene of the issue is Mulberry mentally breaking down the crew and telling them what job their going to do for him. When he gets to the white girl he tells her they're going on a date. Her response is, "Oh crap, I think I'm turned on." Yes this is hilarious out of context and something that should be mocked and passed along to people unfamiliar with the story. But in the context of the story it's just stupid. I might even say it's the reason women don't read comics.

If you were looking for an improvement in the art from the previous issue... well you may not want to look past the cover. I will say that is consistent at the very least. The characters mostly look the same with the exception of hair/skin color. There are only two women in the whole issue and you'd swear there was just one. The big question for the art is where are all of the people that live in this huge mining town? The color is still flat and lacks any real detail; in fact at this point the book would probably be better in black and white. Thankfully there's no "space dialog" so the reader doesn't have to struggle to read light blue font on a black background.

The only real thing this issue has going for it is that it ends in two issues. There's no content here worth following, there's no witty dialog to enjoy. There are not even any action scenes to distract you, or characters to root for. Bad comics can still be enjoyable and fun and even sell a lot of issues. Look at Deadpool from Marvel. This book isn't even fun in a bad way, it's just bad! With only two more issue left in the mini-series it's hard to imagine that it's going to get any better either. Frankly I'm still waiting to hear the news that it was picked up by New Line and coming out next summer.
Overall Score – 1.2/10

Mulberry also puts a plastic dollar in-between a prostitute's boobs... just had to point that out. Follow Dustin on Twitter and ask him anything on FormSpring.