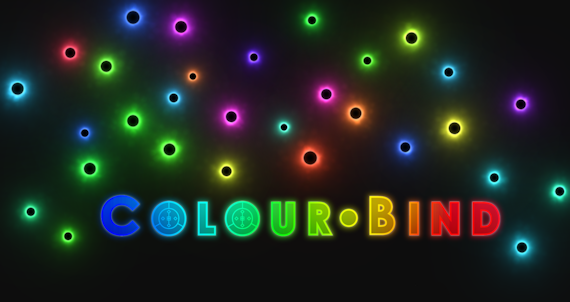 Colour Bind is bizarre; just plain bizarre. Serving as the debut effort from small start-up indie developer Finn Morgan, Colour Bind tries its earnest to be as much of a throwback experience as possible – incorporating a minimal visual aesthetic, mind-numbingly simple gameplay and local-only multiplayer that forces two people to share one keyboard. While alluding to old-school tendencies isn’t a bad thing, Colour Bind struggles to actually make sense of its design and visuals, resulting a flat and rather uninspired game that will likely only appeal to an all too niche audience.

Let’s start with the 'audiovisual' presentation (if you could call it that). In the game you assume control of an elongated object with two wheels attached to each end. You must then navigate the game’s painfully dull and monotonous environments that are all made up of grey landscapes. The game then fills these landscapes with an assortment of weird shapes and objects that sometimes serve no purpose to the level whatsoever. In the first level for example – which merely requires you to drive from the right side of the screen to the left – there are rectangular objects that come in blue, red, and green that appear above you and if you touch these, they’ll float about devoid of gravity seemingly at random. Why did the developers put them there? This seems to be a reoccurring theme throughout the game’s 50 plus levels, and they all come off as unattractive forms of clutter.

The sound is an equal head-scratcher: the game’s soundtrack simply consists of the same, tiring drum and bass loop with few variations and the sound effects are almost entirely relegated to the sound of your 'protagonist' jumping. The game's visuals and sound resemble an old DOS game from the 90´s, but the presentation doesn’t come off as being nostalgic, it just comes off being dated, muddled and above all, just confusing.

The gameplay doesn’t offer many pleasantries either; the gameplay toys around with physics and gravity to a very predictable extent – featuring levels that have you pushing buttons, using random objects to transport yourself across gaps and defying gravity that has you driving your little vehicle on walls and ceilings. The game doesn’t really weave any of these mechanics into anything gratifying; instead, most of the levels just kind of blur together and feature very little variety. Do a jumping puzzle, flip a switch, clear an obstacle, use the gravity reversing mechanisms to manipulate your surroundings, reach your goal – rinse and repeat. It simply lacks pacing and since the repetitive music and visuals persist from one level to another, they eventually become indistinguishable. The game just isn’t interesting to play; it features no sense of structure or progression, and nothing ever sets into a groove. The game is, all things considered, simply a chore to play and it doesn’t do anything new that hasn’t seen before in other puzzle platformer.

Apart from the game’s 50 levels, there are also cooperative stages that require two players to work together. Colour Bind's multiplayer supports local two player games using one keyboard, the added element of a second player makes the game a little less monotonous, though, like the singleplayer, the stages are still stuffed with random and incoherently placed objects that simply don’t detract from the boring, one-color aesthetic that remains omni-present throughout the entire game.  The game also has a level-editor in place, but the interface is rather unwieldy and tough to figure out, making the act of creating a half-decent level anything but a worthy endeavor.  Completionists can try to chase leaderboard glory or unlock all of the game's achievements, adding at least a little bit of incentive to go back to earlier stages.

In the end, Colour Bind has some good intentions; it wants to be abstract and old-school, but the whole thing just falls flat. The game’s gameplay and visuals are tiring and one-note -- never changing over the course the game. After playing the game for several hours, it’s tough to mention something profound or even remotely interesting about the experience as a whole. The entire thing feels like a slog that blurs together in a moments notice resulting in a tedious and headache-inducing game that dabbles in incoherency from beginning to end. If you want an abstract and artistic puzzle-platformer that entertains and challenges you on a constant basis, play Braid. Because after just a few minutes of playing, it’s clear that Colour Bind aspires to anything but greatness. Do yourself a favor, and let this game slip past you.