New York is the center of the comic book industry, and the heart of America’s theater scene too.  It shouldn’t be surprising that an underground comic book like Action Philosophers by Fred Van Lente and Ryan Dunlavey has been adapted into an off-off-Broadway show.  It is performing this week at the Brick Theater’s Comic Book Theater Festival in Brooklyn.  Action Philosophers makes learning fun by putting a group of six famous philosophers together onstage to recount their origin stories, comic book style!  While it might sound like something for kids, this is intelligent humor for grown-ups, and even your smartypants friend who yammers about philosophy all the time just might learn something too.

It has been adapted for the stage by Crystal Skillman and directed by Joseph Mathers.  The pair have made it feel like a proper play, and there isn’t anything about it which would be a giveaway that it’s based on a comic book.  The material holds up perfectly on the stage and there no need for winking nods to the comics format anyway.

It should be understood that, if I could go back in time and have sex with one historical figure, it’d be Marilyn Monroe, but if I could time-travel and nail two historical figure, they would be Marilyn Monroe and Ayn Rand.  So the Playwright and Director pretty much guaranteed a good review from me when they had a scene where Ayn Rand, the founder of Objectivism, did a sexy dance to “Diamonds Are A Girl’s Best Friend”. 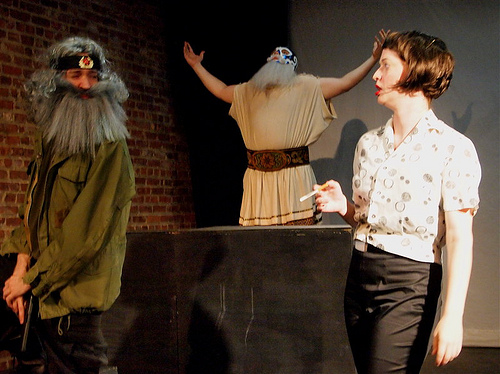 Aside from Rand (Played by Kelley Rea O’Donnell), and her nemesis Marx (Played by Director Joseph Mathers), there’s also Plato (C.L. Weatherstone) being depicted as a luchadore wrestler who screams “Plato SMAAASH!” when angered.  The obvious Superman references come in to play when the show covers Nietzche (Benjamin Elis Fine) along with some kung fu silliness from Bodhidharma (Neimah Djourabchi), plus Descartes shows up played by Ryan Andes (Assuming he exists).

Their biographies of all of these famous thinkers are played out in a campy style, and audiences will learn what inspired each of them to develop their unique worldviews.  Attendees will have so much fun that most people won’t even notice that they’re now qualified to pass Philosophy 101. If you walk into the theater already familiar with one or more of these figures, you’ll pick up on some fun insider jokes, but the show will provide the un-enlightened with everything they need to know to enjoy it.