The Brick Theater in Brooklyn New York has a Comic Book Theater Festival throughout June, and Player Affinity will be reviewing the shows all month long.  Closing today is All I Want Is One More Meanwhile, a play about a former superheroine who renounced her powers, and became a middle-aged woman struggling with ordinary life.

It starts out with a great theme song (Patrick Spencer Bodd, Melanie Adelman & Ellie Dvorkin), which provides the audience a bunch of exposition about the show’s heroine, Perfectra.  Unfortunately, the exposition just keeps coming as the show progresses, with several very long monologs filling in the complicated backstory.  I’m glad to see that the playwright, Kelly Jean Fitzsimmons, has put so much effort into fleshing out her fictional world, but much of it is unnecessary, and audiences could probably fill in details if left to themselves.  This is especially true, because the show takes place twenty years after Perfectra has retired from crime fighting.  The specifics on her powers and how she got them don’t matter when there isn’t a single scene in the show where she uses them.

You see, decades ago, Jane (Played by Elizabeth A Bell) was the crime-fighting robot vixen, Perfectra but she decided to retire and become a normal human so that she could raise a child. Now she’s powerless, middle-aged and has a grown daughter who doesn’t come around very often. This is a good set up for a bit of family drama as the two women work out their mother/ daughter issues about being perfect. However the show isn’t entirely a drama.  It’s also not a comedy either; it’s stuck in the middle and never quite succeeds on either level.  While it has elements of parody and a few amusing lines, the script rarely does anything inherently funny.  To compensate for this, the direction (By Ivanna Cullinan) and performances are done with all manner of outlandish camp that only serves to highlight the problem rather than correct it.

Aside from the overall tone, a major problem with Meanwhile is that the audience never gets to see Perfectra in her heyday.  Rather than witnessing these exciting adventures, the audience gets people sitting on couches and talking about Perfectra’s crime-fighting days.  There aren’t any action sequences, and only a couple of scenes involving the use of super powers.  I don’t expect an off-off Broadway show to have people swinging around on wires like Spiderman Turn Off The Dark, but that doesn’t excuse Meanwhile for having a scene where one of the actors reads aloud from a prop newspaper that recounts the escapades of an unseen hero. 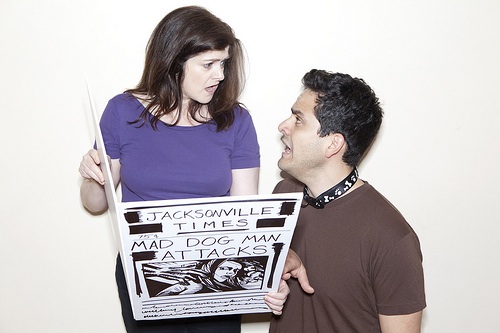 The show is also under-funded and under-rehearsed.  Actors flubbed lines, blocking was clumsy, and there were lengthy set changes, including a lull that was obviously to cover a costume change.  Speaking of costumes, in a superhero show they’re quite important, and this project puts the characters in lackluster outfits; one hero is just wearing red tights and boxer shorts, all while the dialog discusses the high-tech features of his cool new super suit.

I do suspect that I’m out of the target audience for All I Want Is One More Meanwhile.  I’m neither a single mom, nor a young woman, and I’ve seen this sort of superhero deconstruction done many times before.  However, those interested in seeing what becomes of Perfectra can catch the final performance tonight (Saturday the 11th) at the Brick Theater.  Check back with us over the course of the Comic Book Theater Festival for reviews of other shows.  More about the festival can be found on the Brick Theater's website.