Remember when you were a kid, playing superheroes and acting out stories you saw in comic books or cartoons.  Well, there’s a new performance art piece called Batz, which is just like that, except by and for grown-ups.  In it a narrator reads aloud from issues of classic Batman comics from the 30’s and 40’s while a company of actors act out the adventures of Gotham City’s winged hero, never failing to point out dated language, implausible plotlines, and unintended sexual themes.

For those who aren’t familiar with the meta-joke here; there’s a theater company in New York that does a show called “Gatz” which involves reading the entire novel The Great Gatsby aloud on stage.  It has a running time of eight hours, and is quite popular with the artsy-smartsy crowd.

Batz, on the other hand isn’t high art, or anything, it’s just great fun.  The comic books the narrator reads from are the original stories written generations ago.  The cast recites the dialog verbatim, and the narrator does the same with all of the captions.  Batman’s origin has been depicted many times over the decades, but in its first telling in Detective Comics, his iconic tale of shattered childhood and rise to masked vigilante is told in about two pages.  This sort of lightning-fast plot, and implausible adventure is farcical when read aloud word-for-word, and that’s the whole idea behind the show. 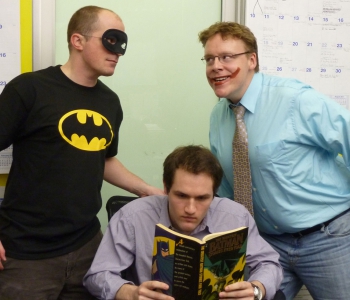 There are lots of visual puns, such as actors throwing socks at each other when the comics use the sound effect “SOCK” when Batman punches someone.  Then there’s the way modern audiences view the innocent relationship between Batman and his youthful ward Robin.  Originally, this was harmless adventure targeted at the young lads who read comics in the 40’s, but modern audiences are quick to snicker at the nonchalant way that Dick Grayson agrees to follow a masked man back to his cave and play dress up…

Language has also changed a lot since 1940. The word “Boner” used to mean an embarrassing mistake, today of course it’s a euphemism for an erect penis, so you can image the fun as Batman and the Joker run around discussing their boners, and debating who pulled the biggest boner. 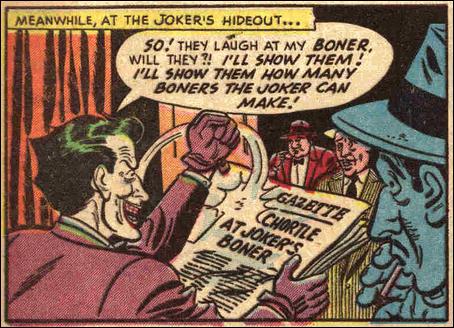 The cast has a great time with the material, taking turns playing the various characters in each issue.  I was particularly pleased with Matt Gray’s performance as The Joker, which he did using a Mark Hamill inspired voice for the character.

Batz of course is a spoof of Gatz, and while Batz isn’t eight hours long, it does wear out its welcome around an hour into its 90-minute running time. It takes about fifteen minutes to act out a comic book story and the show does six different issues.  Once we’ve gotten past the secret origins of the Dyamic duo, the Joker and Catwoman, the novelty begins to wear off.  The creators of the project wisely saved the best story for last; the “Boner” issue, but there was still a lull in the middle.

The show is Directed by Josh Mertz (Who also does a turn as the Joker) and Erik Bowie who’ve come up with a great idea for a performance.  The only real complaint is that it might be too much of a good thing for some people.  Those interested in seeing it for themselves are in luck, because the show has been extended with two additional performances on July 17th and 18th.  More about Batz and the Brick Theater’s Comic Book Theater Festival can be found at the Brick’s website.