For the last few weeks, the Brick Theater in Williamsburg Brooklyn has been running a Comic Book Theater Festival.  It has featured some funny and exciting shows full of nerd satire, and action-packed heroic adventure, but some of them aim a little higher in terms of theatrical drama.  One of the deeper, more touching shows is The Bubble of Solace written & Directed by Jeff Lewonczyk.

The Bubble of Solace is named after the secret headquarters of fictional superhero The Blue Star (A pastiche of both Superman’s Fortress of Solitude and Batman’s Batcave), but it also the name of the comic shop owned by the play’s protagonist A.J. (Roger Nasser). 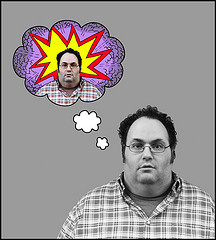 A.J. is a sad little man, and most of his interactions with other people are just him rambling out lengthy monologs about obscure comic books trivia.  He is a reclusive man-child who spends his days and nights alone in a comic store where customers are almost non-existent, and he only finds social interaction through Heidi (Melissa Roth), the attractive woman who runs the sex shop next door.  Occasionally, he’s visited by his childhood pal Chad (Fred Backus), and he spends his nights at home with his mother, Barb (Esther Crow).

Meanwhile… A mysterious fellow named Wayne (Gavin Starr Kendall) appears and seems to know too much about comic books and A.J. in general.  The plot thickens as secrets about A.J.’s family are revealed.  The audience learns why A.J. is like this, and suffers as he refutes all attempts to help him.

Even thought it's mostly a drama, it's also terrifically funny at times.  The audience can have fun snickering at A.J. during the early parts of the show where he’s an alien thing, even though his eccentricities are eventually explained and he becomes a very pitiable character.

Another good source of humor comes from the extensive use of multimedia, which takes the forms of comic books projected on the back wall of the theater.  As A.J. reads one of his precious comics, the adventures of Blue Star are shown behind him and voiced live by a live cast.  A recurring theme is A.J. imagining himself as a character in the comic, and this leads to some fun parody, but also shows his mental decline over the course of the show.

The art used in these sequences is by Mark Hartman, Captain Zorikh, Joe Boyle, Jeff Lewonczyk and Jason Robert Bell, who all did a great job in depicting Blue Star, Ricky Raccoon and other fictional comics with tremendous authenticity. 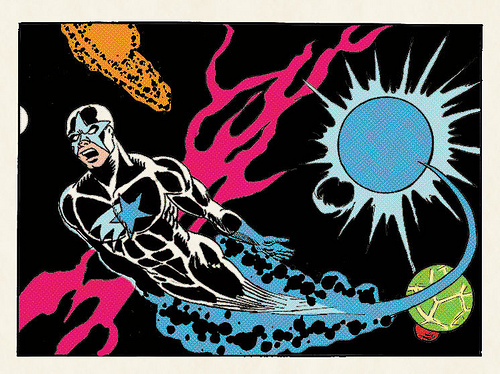 Director Lwonczyk makes a very effective use of the stage.  Furniture is minimal with the Comic Book store in the upper left corner of the stage, and A.J.’s home in the front right, leaving most of the playing area open for the performers and multimedia scenes.  Aside from the occasional flubbed line, or slightly off sound cue, the show is very tight and well-paced.

The Bubble of Solace has two more performances as of this writing, and is highly recommended for comic book fans and anyone with a geek for a close friend.  You’ll certainly see a bit of yourself in A.J. if you’ve ever debated which Flash is best, or whether Alex Ross is better than Jack Kirby. More about this show and the remaining performances in the Comic Book Theater Festival can be found on the Brick Theater’s Website.