The Brick Theater in Brooklyn New York spent all of June running a Comic Book Theater Festival, and among the super-heroic plays shown was a two-fisted double-feature of Savior and Captain Moonbeam & Lynchpin, two specimens of super-powered thespianism.

Captain Moonbeam & Lynchpin, written by James Comtois and Directed by Leigh Hile is about a man whose father might have been a superhero, or might have just been crazy.  Ben (Rick Cekovsky) lost his father as young child; Dad (Played by Playwright James Comtois) committed suicide while dressed in a homemade superhero outfit.  He left behind comic books and journals detailing his exploits as Captain Moonbean, and his battle against the evil forces of his nemesis Lynchpin, who might have been a local shopkeeper.  With his father’s valuable comic book collection, Ben grows up and earns a nice living as a dealer of rare comic books, but he’s haunted by his father’s madness.  Was Dad crazy, or did he just go sane in a crazy world?

I won’t go further into the plot because the play is quite short, and that’s the only problem I have with this show.  At about twenty-five minutes long, it feels like the first act of a great play, rather than a complete project unto itself. Otherwise, it’s very well-done; the performances are good, especially Comtois as the everyman dad who can barely conceal his vigilante alter ego.  It makes a very effective use of multimedia, and has an authentic comic book fan voice to it.  Hopefully it will turn up in a longer form next year. 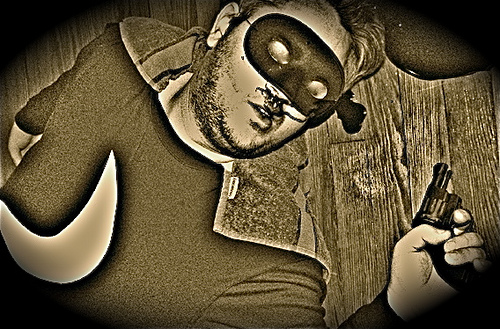 Something I don’t care for is the mixing of science fiction and the supernatural.  Alas, this was major focal point for the second half of this double-feature, Savior, written by Brian Silliman and Directed by Jordana Williams.

In Savior, a slacker technician named Savor (Played by Mac Rogers) is employed by a mega-corporation where he spends his days entering codes into a computer, for reasons unknown to him.  The audience is told that he has a special knack for the sort of work he’s doing, and can’t be fired, but he’s also utterly un-motivated.  Therefore the company has sent in a supervisor (Kristen Vaughn) to increase his productivity.  This is accomplished by playing superheroes, and Savor is encouraged to pretend that the boring deskwork he performs actually has tremendous consequences for the real world. 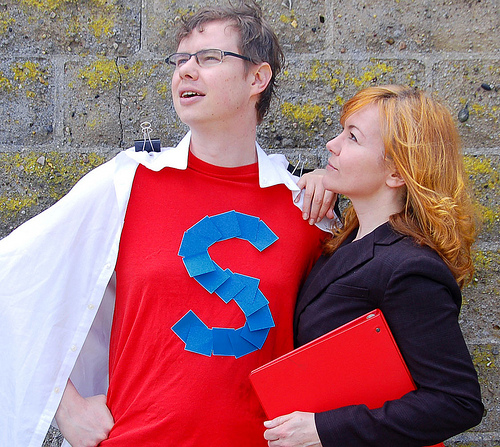 Eventually it is revealed that he's literally saving souls through a process that isn't explained in the show.  This might have been intended as a plot twist, but it's telegraphed well in advance.  Right from the title in fact; “Savior”, get it?  The characters (And presumably the Playwright) proclaim that the most horrible thing imaginable is the possibility that there is no afterlife, and the thought of getting souls to the afterlife turns out to be the one thing that motivates Savor.

The cast does a fine job, and the direction works well enough, but the show is just too short to make this plot twist sound plausible, and from a metaphysical standpoint, there are surely things worse than one’s soul ceasing to exist due to a data entry error (Certainly unwarranted eternal damnation due to a data entry error would be less desirable).  Perhaps audience members with more easily suspended disbelief could enjoy the piece, but people who live their lives on the presumption that there is no afterlife probably won’t care for Savior’s message.

The two plays were accompanied by an animated film called The Confetti Myth by Gavin Starr Kendall and John D. Ivy, with voicework by Shawn Wickens.   Although very short, with simple animation, it was quite funny.  Keep an eye out for it online.

This double-feature has closed as of this writing, but several pieces in the Comic Book Theater Festival have been extended through July.  More information on the festival can be found at the Brick Theater’s website.