The Brick Theater in Brooklyn New York is hosting a Comic Book Theater Festival throughout June, and one of the must-see shows is Funnybook/Tragic book, written by Adam McGovern and Directed by Ian W. Hill.  True to the title, it is a pair of short plays performed back to back, one of them is a comedy, the other a tragedy.  Both are excellent examples of their genre. 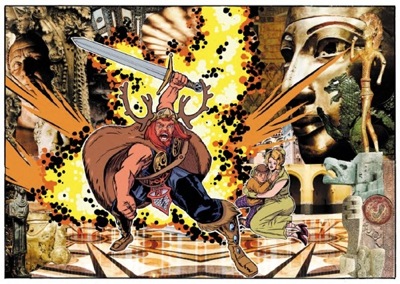 Very shortly into the play, it shifts from Stu recounting the cultural significance of his comic, to a staged reading of an issue of Norrga.  As actors read aloud from the comic, artwork is projected on the back wall of the theater.  The dialog is a dead-on parody of Stan Lee’s writing style, and the pseudo-biblical speak used by Thor and the Asgardians. McGovern has done an excellent job of capturing both Lee’s personality, as well as his distinctive manner of writing dialog.  Drawn by Stefano Pavan and colored by Mirko Benotto, the artwork from this fictional comic is a loving recreation of Jack Kirby’s work at Marvel.

With its air of authenticity and obvious love for comics, Norrga the Thunderer will delight Marvel geeks.

A total change of pace is Underworld, a very serious multimedia show in which there are no actors on stage, just images projected on a screen, while Ian W. Hill provides voice overs from behind a curtain.  Showing the potential for serious drama that can be achieved in a comic book, Underworld tells the story Hitler’s psychiatrist. 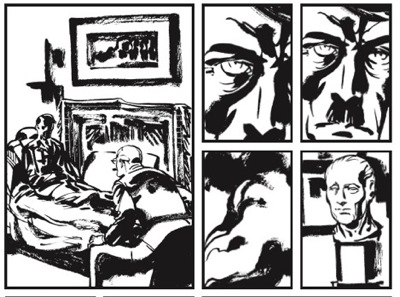 The various twists of this story would be spoiled by a deeper description of the plot; know only that Underworld takes a clever idea and explores it well, using excellent artwork by Guiseppe Palumbo, with a powerful performance by Ian W. Hill who also directs.

Because Funnybook/Tragicbook is produced as part of a festival, set design is minimal.  Underworld uses only a screen on a dark stage, while Norrga has its actors in a row of chairs, and this is all the shows actually need.  Norrga decks out its performers in deliberately cheesy costumes to play the gods of Asgard, and they use equally silly props.  Anything more in either show would just serve as a distraction from the comic art projected behind the performers.

Tom Reid not only plays Stu Riley, but also Wogan King of the gods, and his performance in both roles is hysterical, while Underworld’s sole actor Ian W. Hill is equally dramatic.

Funnybook/Tragicbook is an excellent catch for comic fans who want to spend some time at the theatre, and a good change of pace for theatre fans who want some multimedia in their live shows.  It has two more performances, June 14th and June 19th.  The full schedule for the festival is available at the Brick Theater’s website.