Sometimes we go to the theater for grand drama or literature, but it’s also nice to walk into a theater and see cute girls punching robots, and that’s what you get from Galactic Girl in Attack of the Starbarians.  Running in the Brick Theater’s Comic Book Theater Festival, Galactic Girl is a very silly show, but also a very good one.  It’s a lot like watching anime, but with live actors right in front of you.  Galactic Girl, and her team of bubbly space babes fight bad guys, pilot space ships, and shoot laser guns thanks to some excellent stuntwork, imaginative directing, and extensive use of multimedia on a large projection screen.

The project is written, directed and produced by Jon Hoche.  Normally one person writing, directing, producing (And performing in) their own work is a bad sign, but in this case, Hoche has a clear vision for the story he wants to tell.  He also has his act together in terms of the production.  Often plays produced in off-off-Broadway festivals use very simple design, and have little rehearsal time.  That’s not the case here, Galactic Girl is put together well. 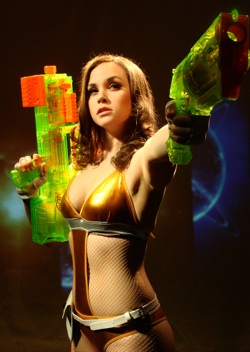 So what is it about?  The story is a deliberately cliché’d mish-mash of space opera tropes.  Galactic Girl is the best space agent of the Federal Government High Council Command Incorporated… or something. A running joke is that no one can quite remember the name of the huge evil empire that rules the universe.  Shortly into the show, the audience learns that the Imperial Space Command are actually the Bad Guys, and Galactic Girl has been duped into helping them conquer all resistance.

Unbeknownst to her (“But knownst to us”) her latest mission to fight the Starbarians is just another ruse to get her to do the Federation’s dirty work. After a few adventures, Galactic Girl (Erica Swindell) and her two sidekicks Pixel (Jamie Dunn) and Moxie-5 (Becky Byers) arrive on Starbaria where numerous plot twists await. Along the way there’s are endless little nods to all manner of sci-fi; Galactic Girl flies a “Whedon-class starship” for example.  This nerdliness also carries over into the sound design (By Jeanne Travis).  I caught the power rangers theme playing in one scene, the show starts off with the theme song from Cowboy Bebop, and a Wilhelm Scream makes its way in as well, just as George Lucas would want it.

There’s an excellent cast here too.  Swindell is completely over the top as Galactic Girl (In a good way), and Temar Underwood nearly upstages her as the prissy leader of the High Council Command while being double cast as the wise king of the Starbarians.

There are a few minor problems with the show; principally that it starts off with so much energy that it has nowhere to go.  It maintains that momentum sure enough, but never rises beyond that start.  It is also a little on the short side with a running time of about an hour.  It ends on a cliff hanger, though, so hopefully Galactic Girl will be back in a full-length show with a second act next year.

But don’t let my nitpicking deter you from seeing this show; it’s one of the must see projects running in the festival right now.  There are two more performances, June 15th and June 30th.  More information about the show and the festival is available at the Brick Theater’s website.