Ever see an attractive cosplayer at a comic book convention and wish you could see them naked? Of course you have, which is why you’ll probably enjoy Nerdlesque, a monthly burlesque show with a rotating nerd theme.  This month they did a comic book motif as part of the Brick Theater’s Comic Book Theater Festival.  As both a theatre critic and a comic book reviewer, my journalistic integrity required me to experience Nerdlesque first hand and report back to the comic book community about the performance.

For those not in the know, Burlesque has become cool and hip amongst the It Crowd in New York, and Nerdlesque is not intended for dirty old men in raincoats.  Rather the audience was comprised of New York’s hipsters, and the crowd about 50% women.  While the performances are very sexy, the focus was on humor, camp and fun.  That doesn’t mean that there aren’t gorgeous women taking off their clothes, it just means that Nerdlesque is very self-aware, and not sleazy. 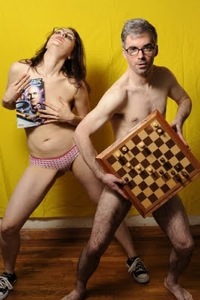 Hosted by the team of Dick E. Lovejoy and Makin' Whoopee (Which I suspect aren’t their real names), the show included dance routines with ladies dressed as Jean Grey from X-Men, the obligatory Wonder Woman, and female versions of The Joker and Robin, along with a lass costumed as Seven of Nine from Star Trek (The hosts pointed out that there are Star Trek comics, so this wasn’t cheating).

If women aren’t to your tastes, you’ll be happy to hear that there were a couple of male exotic dancers, and no one should be surprised that one of them was dressed as Doctor Manhattan - blue penis and all.

So how naked do they get, and can you take a date to this sort of thing?  Well, aside from the blue penis, no one else got completely naked, and one male performer remained almost entirely fully-clothed.  There were G-Strings and pasties involved in all of female acts.  A recurring gag in burlesque is the use of gimmicky pasties, themed around the costume, and there were several clever ones here, such as Hazel Honeysuckle’s Seven of Nine costume that used borg implants to cover her nipples, or Mary Cyn’s Joker outfit with tiny grenades (Remember the grenade scene from Dark Knight), and after Dangrr Doll took off her Robin costume, her breasts read “Pow” “Bam”.

The audience had numerous couples, with the women seeming to enjoy themselves, while the gentlemen avoided enjoying themselves too much (If you know what I mean).  As with many of the shows at this venue, there’s an after party where you can mingle with the performers.  No, you don’t have a chance in hell of going home with any of them, but you can at least have a polite conversation about the resurgence of Burlesque as an art form with an expert on the subject.

Nerdlesque is performed on a monthly basis at the Brick Theater in Williamsburg Brooklyn, with a different form of nerddom highlighted in each performance.  They’ll be back in July with a video game edition of the show.  Yes, Player Affinity will have in-depth coverage.