Comic-Con: It’s not just for comic books anymore. No, now it seems as if this annual event that self-proclaimed geeks of all kinds call home is a major venue for movie studios to unveil big news, debut trailers and drop hint after hint regarding the largest upcoming projects. After taking a gander at the line-up for this year's panels, we will take a look at a few of our most anticipated (pipe dreams as they may be) reveals of Comic-Con 2011.


5. Anything The Dark Knight Rises

This would easily be number one if Warner Bros. had not just dropped a teaser poster and trailer in quick succession to whet this fan's appetite for the time being, but with Legendary Pictures (another studio tied heavily to the “Batman” franchise) leading a panel, more is never less when it comes to The Dark Knight Rises. Whether it be the first promo shot of Anne Hathaway’s Catwoman, some more images of Bane or even some more specific insight as to what exactly is going down in this final installment of Christopher Nolan’s trilogy, the venue and players have potentially aligned for some big reveals. P.S. – Speaking of Nolan, if he were to show his dimpled chin at the proceedings, that would cap off pretty much every desire I’ve had as of late concerning this project. Wishful thinking? Certainly.

4. A Peak at Guillermo Del Toro’s

Yes, yes it’s pretty early for this as Del Toro has just started work on this fantasy action adventure. However, he is a man who loves to keeps his fans in the loop. He's a regular of Comic-Con and always a tricky man with more than a few aces up his sleeve, even a reveal of some of his creature concept work (he recently stated that designing the monsters for Pacific Rim was the most fun he has yet to have in crafting his creations, and if you have seen any of his work, this is a titillating remark). Briefly, for those still unaware about what the hell I’m talking about, in Del Toro’s latest work humanity finds itself threatened by gigantic creatures from another world, leaving it up to an elite squad of soldiers who pilot giant robots to fend them off. I’m not sold on the premise, but I have infinite faith in the man, so any tidbits would be welcome.

Now on a break from filming, the two-part epic adaptation of J.R.R. Tolkien’s novel is certainly well under way, and thanks to Peter Jackson’s giving nature, he has released two video blogs thus far showing the filming of scenes on various sound stages, interviews with the cast and of course general commentary and progress. There is no panel to suggest that anything “Hobbit” will surface, but this is simply the kind of event I would not be shocked to see if something or another was to rear its pointy-eared head. As is with all these desires, footage may be a fool’s dream, but even some insight from any main cast members or Jackson himself would be a welcome addition. MGM has been steadily dropping promotional shots of The Hobbit’s many (13 to be exact) dwarfs, so it is safe to assume that like The Dark Knight Rises, a steady viral campaign has already begun and what better way to foster intrigue than a big juicy “ta-da.” 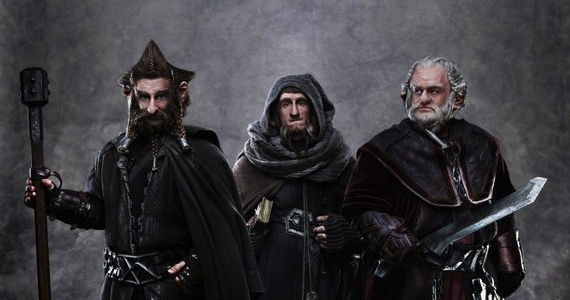 This one must be a given, right? Essentially fully cast, including the likes of Michael Fassbender, Noomi Rapace, Charlize Theron, Idris Elba, Guy Pearce and Ben Foster (that line-up makes me quiver every time I browse it), and already in the process of being filmed, this project has been a decided mystery from director Ridley Scott despite its high profile nature and rumored blockbuster budget. Equally incognito is 20th Century Fox’s blank panel at this year’s festival which offers no insight in the ways of celebrity appearances or film spotlights. The Alien prequel/sequel/reboot/spinoff (or whatever it’s being called) also has the nerd clout and fanboy love to make a splash and a panel dotted with a handful of the aforementioned talent would be a delicious offering. In space, nobody can hear you scream, but at least give us a whisper.

Comic-Con + Robert Rodriguez panel – “Spy Kids Four” /awesome = 2.  Is my math good? Potential street brawl caused by this statement aside, you will not find a bigger fan of Sin City than myself and now six torturous years later we still do not have the follow-up to the fan-adored, critically-loved and financially successful 2005 noir throwback. Always on the backburner it seems, even though it has been frequently reported that a script is either in the works or already completed, we have no reunion of our beloved Basin City residents. With Spy Kids: All the Time in the World debuting in October, hopefully this is a throwaway studio demand, aimed towards an end that will allow Rodriguez to do something he is passionate about. Even if 2 is in the same state of non-production it has been in for some time, expect a landslide of prying questions and glossy-eyed fans. If I were able to be there in person, you better believe I would charge the stage and ask him myself.