Things got a little funnier in Hall H, as Zombieland director Reuben Fleischer took the stage along with stars Aziz Ansari, Michael Pena and Nick Swardson to discuss the upcoming dark caper comedy 30 Minutes or Less.

Things began with a laugh as Ansari quipped, “I didn’t know Idris Elba was British,” referring to the previous Ghost Rider: Spirit of Vengeance panel, followed with a video from absentee star Danny McBride warning “If you are viewing this, it means the apes have won.”

Like many comedies packed with such versatile actors (which also include Jesse Eisenberg), there is a great deal of improv added to the proceedings, Fleischer says, and these are among the funniest scenes in the film. There were entire exchanges between McBride and Swardson that were not in the script, but that’s not to say the actual material. Ansari says he as immediately attracted to the project after reading the script, with Fleischer adding Ansari and Eisenberg have a great easy-going chemistry throughout despite never having met before filming.

Fleischer also briefly talked about his follow-up project The Gangster Squad, about LAPD's fight to keep East Coast Mafia types out of Los Angeles in the 1940s and 50s, set to star Ryan Gosling, Sean Penn and Anthony Mackie among other impressive names. He stated he wanted to make this smaller, more personal film (that being 30 Minutes or Less) before going on to that really large-scale project. 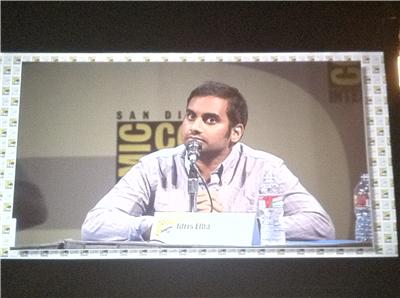 The light-hearted panel wrapped up with two tidbits about Eisenberg. First, during the car chase, he did his own stunt driving (who new?) and second, he actually went on a ride-along with a pizza delivery dude to study for his part. If that’s not dedication, I don’t know what is.