One of the biggest, if not the biggest panel at this year's Comic-Con was certainly the big-budget reboot of everybody’s favorrite web-slinging hero, The Amazing Spider-Man, which began with nine words: “you might want to put your 3-D glasses on.”

The extra-dimensional teaser trailer then debuted with some bonus footage that included a first live-action look at Spidey’s mechanical web-slingers, when suddenly a fan approaches the mic in a Wal-Mart quality Spider-Man outfit, rips off his mask, and lo and behold it’s the man himself, Andrew Garfield. He went on to introduce director Marc Webb, producers Avi Arad and Matt Tomach and female star of the film, Emma Stone.

But wait, there’s more! promptly introduced another clip from the upcoming 2012 film, which went a little something like this (thanks to First Showing for the synopsis): 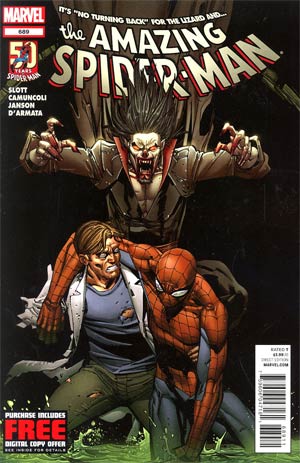 Opens with Peter gets in trouble for humiliating/beating up Flash Gordon, and his Uncle Ben comes in and talks to him in the school.

Sentimental moments with Parker trying to get with Gwen Stacey, but doesn't know how to talk to her.

A shot of Parker holding his dad's Oscorp badge.

Parker looks through a folder at what little he has collected of his biological parents.

Sequences of Spider-Man beating people up on the subway for fun and accidently sticking to various things in his home (All the stunt work has been with wires so far, no CGI at all).

Spidey joking around and making light of catching robbers, at first being like "is it a real knife? No, don't hurt me, please!"

And scene. It looks as if in addition to crafting a moodier, emotionally complex, grittier Spider-Man, Webb as opted to use a great deal of traditional stunt work in lieu of CGI and computer trickery, except for the lizard that is, which was revealed in the third clip of the panel, which came in quick succession to the first two and simultaneously brought villain Rhys Ifans onto the panel.

Connors in a classroom talking to his students, his arm gone from the first moment we see them, as he talks about how he "longs to fix himself."

Cut to two girls in bathroom, something pulls the toilet down through the ground, and a mammoth CGI lizard guy pulls himself up, and sticks out his tongue, nearly licking their faces. 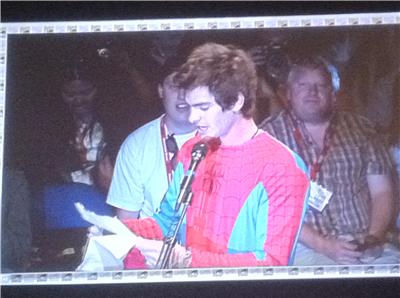 Sounds like a creepy dude, even if the creation is a little CGI intensive, though I suppose there are only so many ways you could bring The Lizard to the big screen in a believable, non-campy way.

The panel more or less wrapped from there, alluded that they were approaching this like it's Shakespeare or a Greek myth. Because these comic book characters are our modern myths, they still want people to see their favorite characters on the big screen (and in 3D). He also spoke to the star of the first trilogy, Tobey Maguire, after filming wrapped, and the actor gave his blessing, thereby passing the torch to this next series of films which will hopefully bring some fresh material to this very popular property.