Say what you will about the franchise that focuses on the love triangle between an emotionally distant adolescent, a hot-tempered werewolf, and a glittery vampire, but The Twilight Saga: Breaking Dawn – Part 1, the first half of the two-part finale, will surely attract quite a few viewers when it hits theaters on Nov. 18.

The vampire romance turned out to be a hit at Comic-Con this year, making its way into the iconic Hall H. Fans lined up as early as Monday – over two hundred were lined up last night – to see their favorite stars talk about the next film in the ever-popular franchise, and they were justly rewarded with an early appearance from several of the film’s stars, including Ashley Greene and Elizabeth Reaser, before the panel officially began to answer some questions.

Most of the screams and excitement at the panel were for the principle cast of Kristen Stewart, Robert Pattinson, and Taylor Lautner (i.e. Bella Swan, Edward Cullen, and Jacob Black), but the truly major highlights come courtesy of director Bill Condon.

The director revealed to the press that “The Twilight Saga” won’t end so long as the series’ author Stephenie Meyer continues to write more books for the series, which apparently she might. While the Bella and Edward part of the story will be wrapped up, there’s potential for “The Twilight Saga” to focus on other characters and aspects of the books. Maybe that means Renesmee Cullen or Jacob Black. The latter definitely seems like a possibility, as there’s apparently a scene from Jacob’s perspective in “Breaking Dawn – Part 1.”

Condon, who describes this installment as a “real horror movie,” was impressed with the novel Breaking Dawn and early script outline for its film adaptation. He also debuted some footage from the film that wasn’t derived from the novel in which Jacob breaks from his wolf pack for the protection of Bella. 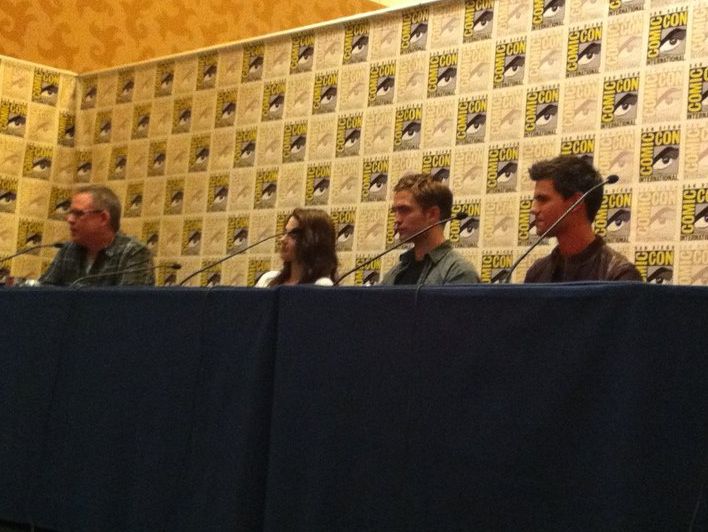 Fans were also treated to a glimpse of the big honeymoon moment, and the reaction was predictably wild.

Stewart and Lautner also expressed appreciation for their characters. Stewart states that Bella will give up everything for her cause, while Lautner stated that he loves Jacob’s qualities when asked if he felt that he was similar to the character.

The actor was asked by a fan about his physicality and the consequent potential for action roles. He leads the John Singleton thriller Abduction, which hits this fall, so hopefully that’ll give us a clue about his future in action flicks.

The panel concluded with a raffle, the winner of which will accompany the cast at Summit Entertainment’s party this evening, and a replaying of the film's teaser trailer. That's all for The Twlight Saga: Breaking Dawn. Stay tuned for more updates from Comic-Con!