Being that this is the comic section who better to ask about this summer's up coming comic book movie releases. In this feature we take a look at the up coming Green Lantern release. This is DC's and parent companies first venture outside of Batman and Superman (not counting the Wonder Woman and Flash TV shows), so it's a pretty big deal. Many comic fans were instantly crushed by the casting of Ryan Reynolds as Hal Jordon so we decided to take a look at a hand full of released images both official and unofficial and give our thoughts and comments. Feel free to leave yours in the comments below or on the message board.

Dustin: Well this movie poster… wallpaper thingy is just horrible. When the hell did OA revert back to the Stone Age? They have power rings and they take the time to carve into rocks… trouble is already brewing for this movie.

Neil: I love the background images that the movie is doing. But that costume is just awful. I don’t know if there trying to make it organic to Hal. But it’s bad.  Reynolds does not even look real in this image.

Nicole: This image looks full of CGI and reminds me of a scene from World of Warcraft – nice graphics, but hopefully the CGI isn’t trying to hide bad acting or a poor story.

Kevin: This would look really cool if i didn't already know what Green Lantern is… 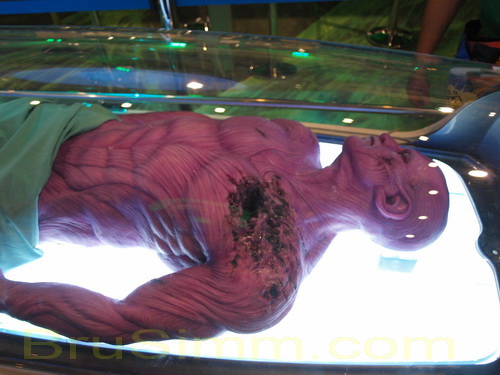 Dustin: Well they got the color right. I don’t know why he would die of a shoulder injury, but hey it’s just a prop so who cares.

Nicole: The corpse looks a little… plastic.  Not very realistic looking with a small singe on the arm that looks like it has… sparkles?

Kevin: Hope his corpse looks better in the movie. 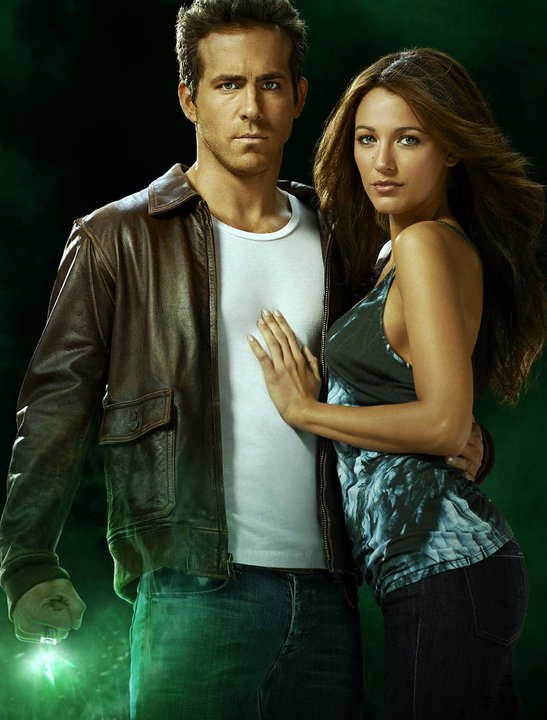 Dustin: I think their heads are CG’d onto those bodies. Carol looks more like a teen mom than a pilot and owner of a company. Tie dye and jeans? It must be causal Friday. Reynolds… sigh… well he looks like he does in every other movie he’s ever been in, but at least they got Hal’s clothes right. 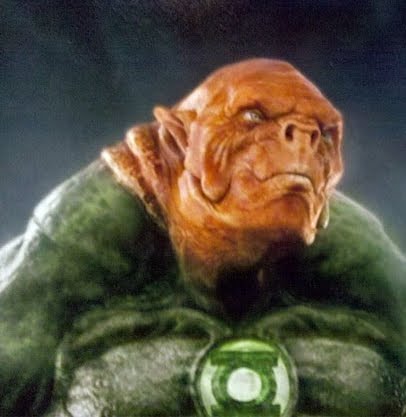 Dustin: Ah Kilawog. I didn’t know he was half Shar Pei and half Manatee. Not that the character is pretty to look at in the comic, but this is just ugly. If I didn’t know who it was I would probably pass on the movie.

Neil: Killowog looks like he is trying to decide what to pick out from a menu.

Nicole: Like the corpse from the second image this character looks more like one of the villains from Power Rangers.  It is really hard to make characters like this look anything but cheesy though, so I admire their attempt.

Kevin: He looks like he's sad because he’s in the movie. 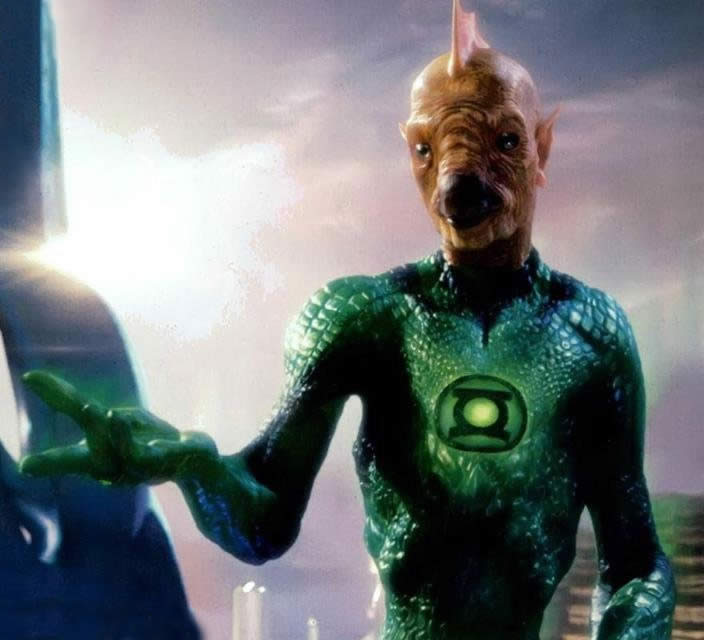 Dustin: I think my biggest problem with this is that more than likely someone went to the CG artists and told them he was half fish and half birdish and then they literally made him half fish and half bird. Also why does his suit look all scaly? Please don’t tell me they reflect the internal muscles of the wearer or some equally dumb shit. 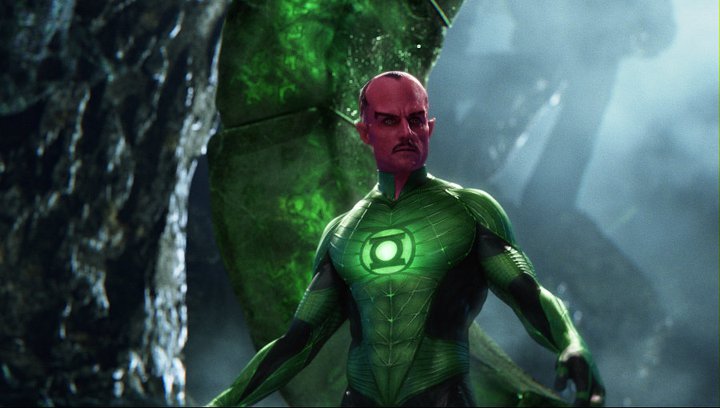 Dustin: Out of all of the casting and characters Sinestro is the one I have the least amount of problems with. Until I hear him talk I would say the only problem is again his stupid suit. Why they could have made skin tight leather is beyond me.

Neil: F’n Siniestro. According to my buddy D, “He is the best green lantern ever.” Mark Strong was a perfect choice for this character.  This guy gives me hope to watch this movie.

Nicole: Thankfully, Sinestro’s pink skin is not too bright or too dark – it looks pretty good and so do the markings in his face.  Hopefully the same man who player a decent Lord Blackwell in Sherlock Holmes and an interesting villainous father in Kick-Ass can bring even more evil to this character.

Kevin: Could be the most promising shot, but man I hate that suit. 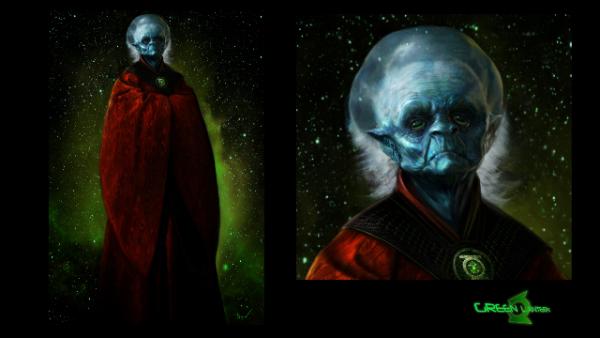 Dustin: Where the hell do you begin on how bad this looks? The guardians look like Yoda screwed a blue camel and they popped out. Is he wearing velvet? Why would he wear velvet? Do they watch Seinfeld out there too and thought, “You know, I could drape myself in velvet.”

Neil: Why does the guardian look like Palpatine????  Search your feelings Hal.

Kevin: This just plain sucks. The CG should enhance the story not be the story. 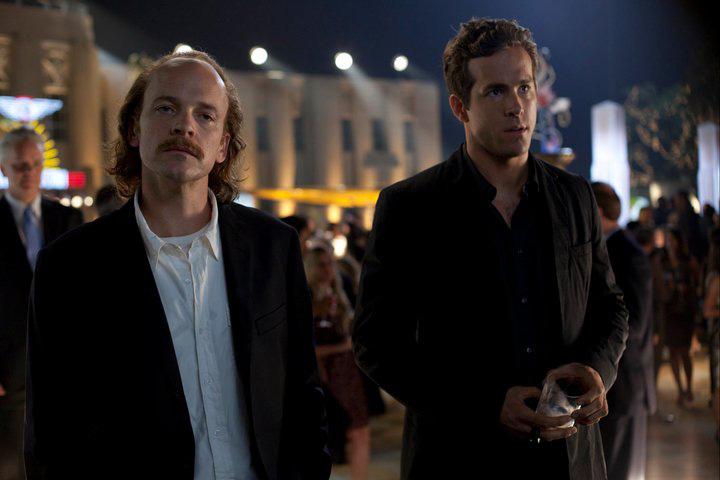 Dustin: What are they doing? Are they in line for something? Does Hector see a delicious taco in the distance? I don’t even know why these two people would be standing next to each other or why the writers of the script couldn’t figure out that Hammond didn’t start off looking like a total asshole. 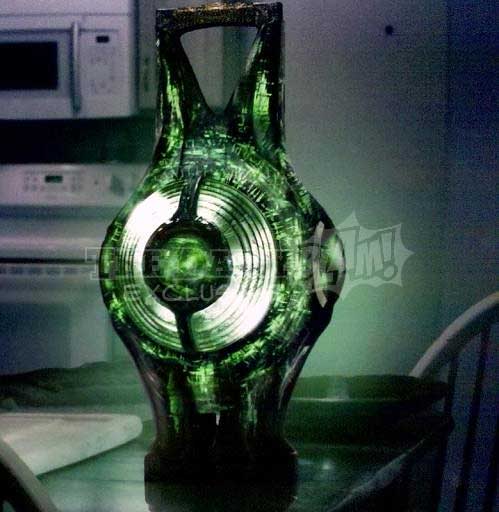 Nicole: Not liking the looks of GL’s power source – it looks like it was made with Christmas tree fur.

Dustin: We saved the best for last and here’s why, it sucks. It sucks worse than the casting. I sucks worse than Ryan Reynolds acting, worse than the CG, worse than the script, worse than the posters and worse than that shitty banner that looked like they had never tried making a modern superhero movie before. That lantern was the straw that broke the camel’s back. There’s a saying that goes, “If it ain’t broke, don’t fix it.” So why did they take the one thing that shouldn’t have been easy to get right and screw it up? Literally when I saw this photo I wondered why Warner Brothers and DC suddenly forgot how to make a superhero movie. I’m not a huge fan of the Dark Knight, but its leap years ahead of Green Lantern. Sometimes DC and Warner just seem so stubborn that they’re unwilling to copy anything Marvel has done. They could have looked at Iron Man and Spider-Man and hell even the X-Men as bad as they are and learned from them and done it better, but instead they’d rather make their own mistakes and gamble on one of the top selling comic franchises they have. It’s ridiculous. I could have forgiven everything and given this movie a chance until this stupid lantern popped up, but now I know this movie is going to be buried in a summer full of blockbusters and will be lucky to be number one at the box office its opening week.