These are the Days of our Lives, formerly known as Community. For the second week in a row, the quick-witted comedy had some dramatic turns as the feud between Abed and Troy continued to develop slowly, but surely. If I didn’t know any better, I’d think this might have an actual impact on the show’s continuation.

Let’s be serious for a second, because the show obviously is. Last week’s moment of disagreement between the two best friends apparently had a lasting effect on their relationship. In this week’s installment, Abed and Troy tried to build a pillow fort in the school...because blanket forts are too mainstream. And while everyone was skipping class to help, the Dean offered up the idea to go for a world record. While the idea sounded intriguing, there was one real problem: Troy didn’t really want to build a pillow fort. When visited by guest star John Goodman again, he realized that he has always been Abed’s sidekick.

Abed didn’t really seem to be affected by Troy’s decision to go rogue and set up his own fort. But soon, the two were in an epic race to build the biggest fort in school. The entire storyline came to a head when the two forts met in the study room, because one of them had to make way for the other. Even if the slow dissection of this integral friendship is very unlike Community, the execution certainly does fit the bill. How many shows do you know that would feature a showdown between pillows and blankets? Regardless, it doesn’t take away from the fact that Troy and Abed are very much at odds. The end of the episode actually saw the two face-off and confront their differences. It’s only because no one died that we were sure this wasn’t a daytime soap.

But it’s not like the other storylines were any less dramatic. Britta was torn between Subway and her loyalty to Pierce and Shirley. After Subway took the place of their sandwich shop, Pierce and Shirley were determined to bring them down. To make a corporate takedown easier, Subway had personalized their brand in one single person—a guy named Subway (played by Scrubs’ Travis Schuldt). But Subway was much more than someone who reminds you to “eat fresh,” he was all for the environment and female empowerment and...well, at this point Britta was already his. A perfect opportunity for Shirley and Pierce to use Britta to get what they want. The story was done wonderfully as we actually bought into their relationship. Subway (the company) had forbidden Subway (the person) to feel anything for someone, so the love was not only extremely weird, but it was also forbidden. Cue violins. 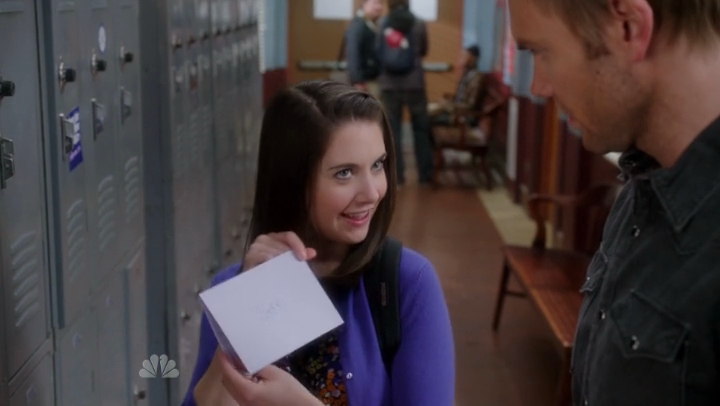 Meanwhile, Jeff found out they have lockers at Greendale. When he found his and opened it, he uncovered a lot of pamphlets and a note from Kim. The note called Jeff out as an inconsiderate jerk, which he is. In his search for Kim, he found out that she died and that now he’ll stay an inconsiderate jerk forever. This storyline laid heavy on his character as it confronted him with his personality in quite an undeniable way. It’s up for questioning if this will actually change him for good, but it was nice to see Jeff in his most considerate way ever. It got pretty personal when Jeff found out that Kim is not only alive, but also not a girl. Kim is a guy Jeff has met many times but always forgot about. Jeff apologized appropriately and the matter was dealt with. Unfortunately, that’s not what Annie wanted at all. Touching upon her unspoken feelings of resentment after Jeff kissed her and never addressed the subject again, Annie hoped Jeff would learn from female dead Kim. Both stories came out strong but neither of them seemed to be dealt with.

All the characters seemingly had a pretty dramatic week, yet the only relationship that really changed by all of this was Troy and Abed's. Obviously, these two are going to be friends again but it’s actually refreshing and odd that the writers would even take the story this far. Meanwhile, as avid Troy and Abed fans, I’m not sure where I stand on the matter. Everyone has felt like they were in the shadow of a friend, but how is Troy ever going to deal with that when Abed is more robot than man? That, and more in an all new Days of our Lives, next Thursday on NBC.